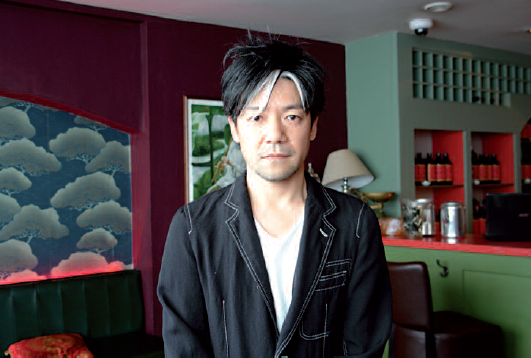 So, Mr. Nagai, what was your aim with this film?

Nagai Akira: Well, it’s a story about the world of advertising, in which I usually work as a director. So I packed every feeling that I have about the industry into the film; but it’s a comedy, so the tempo of every move and action becomes the most important factor. I aimed for something that people of all ages could laugh at easily.

What did you think of the screenplay when you first read it?

N. A.: At first, I actually refused it… The world of advertising is quite unique, right? It seems like everybody knows about it, but in fact hardly anybody does. People like me are used to working around the ridiculous demands of clients, but I thought it would it be entertaining for the general public to see what actually goes on in the industry. As well as that, hardly anyone is familiar with the Ad Festival, so I thought it would be quite difficult. Basically, my first impression of the screenplay wasn’t good at all, but then I realized that if the problems within the ad industry, such as difficult situations and frustration, could be seen as the suffering of businessmen everywhere, the story could actually relate to other industries too. I decided to give it a go, though I did have doubts. Finally my wife convinced me when she read the screenplay and said, “Oh, it’s pretty funny and interesting!” That helped me realize that the general public could understand it too.

I watched the film myself; I found it great fun and very entertaining. it’s a story about a unique situation when the Ad Festival is held outside Japan – but what influenced you to direct films?

N. A.: I’ve wanted to become a film director since I was a university student. As well as that, in the film industry these days, there aren’t any set paths or courses to become a director. It’s not like you can produce a film one day by just continuing to do one specific job. So I thought if I miss this chance I’ll never be able to direct a film. So I came to the conclusion: why not make a start? I did think that the screenplay was a bit difficult, but I had a feeling that if I don’t challenge these kinds of stories, I would never get an opportunity like this again. That was what influenced me.

I think it was the fact that both you, the director and the screenwriter work in advertising that made it possible for the story to be told in the way it was. As you two discussed things during the production, was there anything that you focused on in particular?

N. A.: First of all, the rhythm, the tempo of the story was very important. We usually work in the TV ad industry, a world that’s either 15 or 30 seconds long. So we made sure that the film didn’t become boring, which is technically what we do best! So we didn’t get stressed just because it was a film that we were producing. As well as that, the ad industry is in quite low spirits at the moment. So the screenwriter and I discussed this and concluded that we should reintroduce and reenergise the public’s fascination with the industry, by not only showing the success stories, but also depicting the negative occurrences.

I thought that the choice of who should win awards would take place in a formal setting in a small meeting room, but it seems to be more like a party! i was also surprised at all the dishonesty and tactics that go on in the background. Is it really like that at a real Ad Festival?

N. A.: It really is like that. The judges do make secret deals with each other, and at the end of the festival presentations are held in a huge meeting hall in English. In that sort of place, Japanese people tend to be in quite a weak position. That’s because they are in a world where the professional producers who gather together can all speak English without any difficulty. It’s really tough for the Japanese to put forward their opinions using ‘broken’ English. But Mr Sawamoto, believe it or not, actually wore a T-shirt with an anime character on it to make an impact when he was a judge at Cannes Ad Festival! The Toyota ad that came on in the film actually exists and narrowly missed as a qualifier at the Festival; but thanks to Mr Sawamoto’s presentation, it got the silver award! So that part of the story is actually based on his real experiences! I shouldn’t really say it out loud, but judges do use such tactics to succeed in the competition. Although the non-Japanese only do it because they honestly and genuinely love their ads and want them to gain awards. Japanese people tend not to say things like,“Isn’t my ad great?”. I guess it’s a national characteristic. But non-Japanese people don’t think of it as a bad thing. It’s not really illegal, so even though it looks bad from a Japanese person’s point of view, the non-Japanese might just ask: “Why is it a such bad thing? Is it so wrong to love our ads and push hard for them?”.

What was it like working with Mr Tsumabuki and Ms Kitagawa?

N. A.:Mr Tsumabuki is the type of actor who would develop his character as we discussed and talked while making the film. He really strives to communicate with the crew. There were non-Japanese cast members on site at all times and he always spoke to them, making sure they are not tired or anything. He always made the atmosphere enjoyable, so it was really fun working with him. In contrast to him, Ms Keiko Kitagawa is very stoical, so when I asked her to do something or when I wanted her to do something in a certain way, she carefully wrote everything down. Then she concentrated 100% on getting it right.

TV ads and films, what is the most enjoyable aspect of each of them?

N. A.: In TV ads, people say a lot of things within a limit of 15 seconds, so the quality is dependent on that. At times, a hundred million yen is spent on those 15 seconds, so you’re able to try and test out new technology and skills. If I explain it in terms of music, it’s like producing a high quality album. In contrast to that, I think film producing, in terms of music, is like a live concert. You perform it in front of the audience and you can see their reactions immediately. With TV ads, you can’t normally see the people who watch them, so you can’t tell what the public thinks; but with films, you are making the people stay in their seats for around 2 hours in the dark. This difference particularly amused me: like the difference between making an album and performing a live concert. When you finish with a TV ad, it’s over, but I think a film comes alive for the first time and starts developing once the audience watches it. It’s like when the person sitting next to you starts laughing, it encourages you to laugh too – I think that’s the charm of a film.

Did you have any difficulties while directing?

N. A.: I usually direct TV ads and this is my debut as a feature-film director, so I always got picked on by the crew members who normally work on films. They teased me in such sly ways, almost like the things students in an all-girls’ school would do! Essentially, they have been working very hard in the film industry for a long time and here comes a guy, an immature film director, and makes his first film. Basically, it’s unacceptable in their eyes! When we were drinking together, for instance, they would ever so casually say something like, “I hope you get sick so I can direct”. The film industry world actually still has that kind of ‘closed’, not-sonice side to it. There are times when actors or musicians direct films, but it’s a matter of fact that they have bitter experiences because of the people already in the industry! To be honest though, both sides are just putting forward a logical and sound argument, in the sense that I do understand why they do it. It’s not about who’s right and who’s wrong; they have their own pride. So the difficulty was to work with them continuously and pull them along with me for a whole month of directing! It was stressful. No matter what I ate, I didn’t get fat! I just kept on losing weight. I know what to expect from those kinds of people now after this experience, so I think for my next film I might as well have some fun fighting them!

What kind of message are you trying to convey through this film?

N. A.: It’s based on the ad industry, and I think that unreasonable demands from our bosses and clients must be common for every industry, so I would like the audience to have a laugh about that. As well as that, I want the audience to question themselves and reflect on the reason why they still stay in that particular job when they put up with so much. Like Kiichiro, the main character, we can keep going because we love what we do. If we keep going and keep on doing what we love, then we should find happiness. I want the audience to feel the positive energy within a gloomy atmosphere.

Last but not least, please leave a message for the Zoom Japan readers!

N. A.: It’s a really fun, feel-good comedy and it’s quite short as well, so whenever something bad happens, it would mean a lot to me if you would watch the film, enjoy it and feel happy for those 2 hours, without thinking too much. So why not grab a friend and watch the movie?!