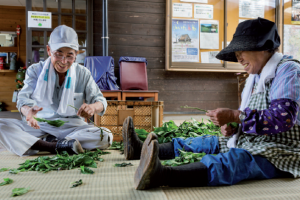 In Kamagawa, southeast of Tokyo, one organization is preserving the increasingly rare terraced rice fields, with no help from grants or subsidies.

For those who love traditional Japanese landscapes, and especially for those who live near Tokyo, the terraced rice paddies of Oyama Senmaida are a sanctuary. Away from the hurly-burly of the city, the summer breeze caresses the leaves of the rice plants, forming neat rows, like emerald green carpets on the side of a small hill. The singing of cicadas and the chirping of birds mingle now and again with the laughter of children. These four hectares of rice paddies, the closest to the capital and the only ones to be irrigated only by rain water, are situated on the tip of the Boso Peninsula (Chiba). This landscape, a reminder of Japan’s farming traditions, also welcomes 50,000 tourists a year. “We had no idea we could attract so many people. We were too used to this landscape. Personally, I hated it,” says Mitsuji Ishida, the 63 year old farmer who is the head of the non-profit organization that works for the preservation of Oyama Senmaida. For him, born and raised here, the terraced rice fields which he is so proud of today, meant only hard work. “How many times have I regretted not having flat fields? I can’t count,” he recalls. Mr Ishida still has his strong, sinewy hands from a lifetime of farm work, but these terraced rice paddies, which continue to attract tourists to this day, nearly disappeared because many other farmers can no longer say the same. The farmers, whose average age is 65 years or older, don’t have the strength to go on working on these sloping fields that are impossible to access with machines.

Tired of the hard work and low returns, some are choosing to abandon their fields despite the four hundred year old tradition. “If we hadn’t founded this organization, these rice fields would have disappeared,” admits Ishida. Without the means or know-how to preserve them, the locals believed that Oyama Senmaida’s fate was sealed until Toshio Fujimoto, a former leader of the student revolution in the 60s, discovered this landscape in 1983. Enamoured with “this view that reminds us of our origins,” he worked tirelessly to launch an appeal for support to found the organizaton. It was a brilliant idea. In order to give this region a new lease of life after its vitality had been sapped by depopulation and the increasing age of the remaining inhabitants, he decided to restore this traditional form of agriculture to its former glory by working in collaboration with people from the big cities. To achieve this, Fujimoto and other local people such as Ishida, carefully studied the ecotourism initiatives in the Kochi region (in the west of Japan), where people living in the city rent a portion of land and cultivate it under the supervision of local farmers. “We had these rice paddies and the techniques to maintain them. The city’s inhabitants, for their part, wanted to renew their contact with nature. So we thought: ‘what if we formed a win-win relationship?’ ” Ishida remembers. This little group of friends won support from the city of Kamogawa and founded the organization in 1997. Together they put together an economic model where the local farmers are paid by the organization to share their know-how with people from the city who, for their part, were dreaming of immersing themselves in nature and farm work. “In the beginning, the locals told me it wouldn’t last more than five years,” Ishida laughs. He became president of the organization just before Fujimoto died in 2002. Today, 140 people regularly travel to Oyama Senmaida to mark out the beds for the rice seedlings, weed and then harvest the little golden grains in autumn. It costs 30,000 yen for a year’s subscription (about £160) for a 100 square metre plot. This work makes your back ache, but it also produces 40 to 50 kilos of rice per year, so why not? The organization will soon celebrate its twentieth anniversary, but “there is no lack of people who want to subscribe every year,” says Ishida with a smile. Some of the subscribers have even made the choice to move out here permanently, just for the love of these rice fields.

“We succeeded by promoting the quality of life in this area,” says Ishida. The organization has a yearly budget of £212,000, and is profitable and independent without any grants or voluntary donations. It has four permanent employees and pays 70 local farmers when needed. They also invest in other activities such as growing haricot beans, making sake and renovating old farm houses. These are also based on the collaborative model that was developed when the organization was founded and it has been copied and adapted by many others since. All of these initiatives are helping renew and maintain the agricultural landscape of yesteryear by forming small communities of city dwellers and locals working together. This ‘club’ or small circle of people who love agricultural life, creates intimate ties between people from very different cultural backgrounds. “Sometimes they have difficulty understanding me. We speak with a strong accent here,” laughs 78-year-old Hideko Aikawa. “I am happy that they come here, it’s nice to see the area come alive,” says this craggy faced farmer. “When I’m here, all of my stress disappears,” says Shinichi Yokota, who has been part of the project for eight years. “In Tokyo, where I live, my children don’t have the opportunity to play surrounded by nature, and I enjoy seeing them run after butterflies and frogs” he laments. These rice fields and their diverse natural habitats, from little streams to forests, are a cradle of life for small animals. Hawks, salamanders and the fireflies that symbolise pure water in Japan are quite common. “Many of these species are registered on the prefecture’s (Chiba) red list of endangered species, but I won’t name them all because this kind of information could attract poachers,” says Daisuke Asada, one of the organiszation’s permanent employees. “It’s unfortunate that places like this are becoming increasingly rare,” he frowns. An entomology graduate, he was the one who put together the list of species finding shelter in these rice paddies that is handed out to the children who come on school trips. “They visit twice a week on average, we are really very busy,” says Asada. They remain busy throughout August as the harvest approaches. The rice paddies are beginning to change to a golden colour, and soon the wind will lose its summer warmth. On the 29th and 30th of August, everybody, both subscribers and other helpers, 600 people in total, gather in Kamogawa to harvest the fruits of their labour. It’s one of the last tasks to complete before drinking a toast at the “harvest festival” held in early October.