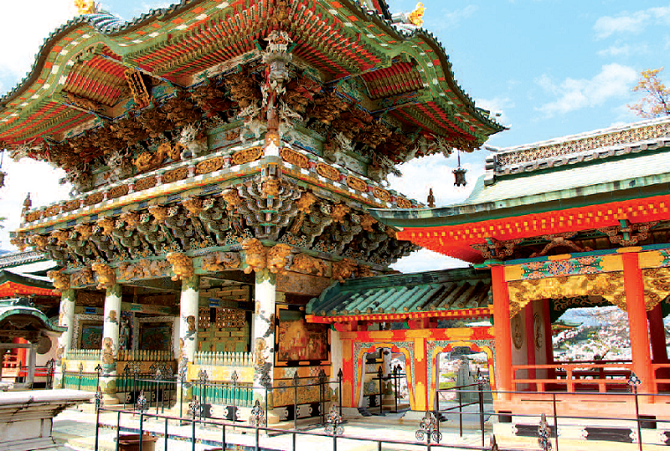 Born of the unbridled imagination of a former business man, Kosanji is a unique example of its kind.

Filial piety can sometimes go way beyond the limit, as this unique architectural complex shows.

Stuck for Mother’s Day gift ideas? Why not build her a temple? Well that’s what Kanemoto Kozo did! When his mother died in 1934, Kanemoto, a successful Osaka businessman, gave up work, let his hair grow and became a Buddhist priest, renaming himself Koso Kosanji. Two years later he founded a temple in his mother’s honour, and devoted the next thirty years to its construction. The fruits of his labour are tucked away on the tiny island of Ikuchijima, eighteen kilometres off the coast of Onomichi in Hiroshima Prefecture.
Back in the 15th century, this once-busy shipping channel of the Seto Inland Sea was a “Kingdom of Pirates,” controlled by the fearsome Murakami clan who demanded tribute from all passing vessels. The labyrinth of islands and secluded bays made ideal pirate territory, and today, Pirate Tourism is a growing attraction in the area. You can even visit the Murakami’s stronghold on neighbouring Innoshima Island.
For a small island, Ikuchijima (population 11,000) is home to a surprising amount of art and culture. Bel Canto Hall has a claim to be one of the top concert halls in japan, and the Biennale Project is a series of open-air sculptures dotted around the island, part of an island-wide art museum. Artist Hirayama Ikuo (1930-2009), renowned for his dreamy paintings of the Silk Road, was born on the island and has a museum dedicated to his work there.
You can get to Ikuchijima via ferry from Onomichi or Mihara. However, it’s far more fun to go island-hopping via the Shimanami Kaido Expressway, the spectacular road-and-bridge network that links Japan’s main island of Honshu with Shikoku. It spans six islands, including Ikuchijima and Innoshima, like stepping-stones, and has cycle lanes along the entire sixty-kilometre route. 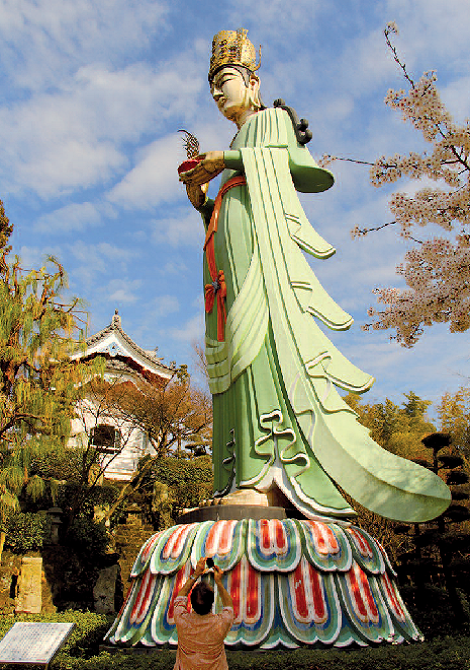 A 15-metre-high replica of the original statue of Gaze Kannon, which measured just 2 metres high.

As soon as you arrive in Ikuchijima, you find yourself in a world run on “island time”. Traffic evanesces and life slows down. No wonder writer Donald Ritchie called these islands “the last of Old Japan”.
To get to Kosanji, first head for Setoda, the island’s main town, and also Japan’s largest producer of lemons. Citrus trees are everywhere: lining the roadsides, carpeting hillsides and gracing gardens. There’s even a theme park devoted to the fruits: Citrus Park Setoda. Look out for the anseikan, a cannonball-sized relative of the grapefruit which, like the hassaku and iyokan, is unique to these islands. The first bite is crisp and sour, but the aftertaste is pure honey. Other ubiquitous citrus products include hassaku cakes, mikan jams, fruity honey, sauces and cordials, while the local lemon ice-cream is legendary.
The fruit is tempting, but what most visitors come to see is the phantasmagorical Kosanji Temple, one of the most extraordinary places you’ll see in Japan. No matter what you read about Kosanji before coming here, nothing quite prepares the mind for the spectacle that greets you. Kanemoto – or rather, Koso Kosanji – was not content to honour his mother’s memory with some humble little shrine. Only the best was good enough, so he had replicas built of his favourite bits of temples from all over the country, a kind of “Best of Japanese Buddhism” wonderland, representing not just different places, but also different eras. With buildings from the Asuka Era (538-719) right up to the Edo Period (1603- 1868), it’s a trip through time and space, spanning one thousand years of Buddhist architecture. 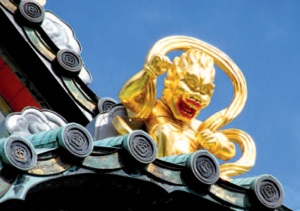 A golden goblin on top of the Koyonomon gate. 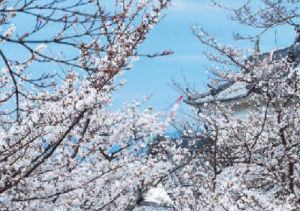 In springtime, the cherry trees in blossom add a sublime touch to the scene.

On arrival you pass through the bold red and white outer gates (a replica of the Shinshinden Gate of the Kyoto Imperial Palace), pay your 1,200 yen admission and then proceed to the Chumon Gate (fashioned after the Romon Gate of Horyuji Temple in Nara). To your left, that sumptuous five-storied pagoda is based on Muroji Temple from Nara. In all, there are over twenty gates, halls and pagodas, fifteen of which are Tangible Cultural Properties, spanning some 50,000 square metres.
This dazzling display is one man’s vision of paradise, and even if you know nothing about the buildings’ background, you can’t fail to be uplifted – especially in April, when the whole beatific scene is afloat on a soft pink cloud of cherry blossoms. Moreover, Koso Kosanji didn’t just copy the original buildings, he embellished them with his own fanciful flights of imagination, like one of those “based on a true story” films that exaggerate the facts for dramatic effect.
Take the statue of Guze Kannon, for instance. It’s modelled on the one in Yumedono Hall at Horyuji, but the difference is that while the original is a mere 1.97 metres high, Kosanji’s version towers over you at a whopping 15 metres.
Then there’s the astonishing Koyonomon Gate, or “My final wish” as Kosanji Koso called it. It’s a full-scale reproduction of Yomeimon Gate at Nara’s Nikko Temple, but Koso added an orgy of detail and garish colouring that’s simply overwhelming. Gleaming golden goblins perch on top; glaring dragons of all shapes, sizes and colours abound; scary monsters mingle with exotic birds – peacocks, swans and some not of this earth – while cats nestle in forests or among lotus blossoms alongside standing Buddhas, reclining Buddhas, seated Buddhas – all gleaming in greens and golds, reds, whites and oranges. Unsurprisingly, this gate alone took ten years to complete.
Just behind the main complex, the sunlight shimmers on a hillside of pure white. This is the Hill of Hope: a vast 5,000-square-metre garden of Italian marble created by Hiroshima-born sculptor Kuetani Kazuto. The Tower of Light rises heaven- ward from out of the gleaming mountain, like two giant hands clasped in supplication.
If you need a break after all this architectural sightseeing, a quiet nook just behind the Octagonal Hall provides the perfect austere and minimalist contemplation spot. Here a waterfall splashes into a lotus pond dotted with moss-covered rocks and stone lanterns, while little stone bridges cross a chuckling stream. Pretty green birds called whiteeyes dart among the branches of a weeping cherry tree, and the sweet smell of incense wafts across from the temple.
For those wishing to stay on the island, Setoda has a couple of ryokan inns with sea views, right in the port area. One, the Tsutsui Ryokan, boasts a lemon-scented bath, while the Suminoe has a nice traditional Japanese garden.
Otherwise, return to Onomichi and stay at the U2 Hotel Cycle, Japan’s first hotel designed especially for cyclists (though motorists are welcome too).
But before you leave, don’t forget to try that divine lemon ice-cream.
STEVE JOHN POWELL

No47 [Taking a Walk] In the gardens of Shikoku