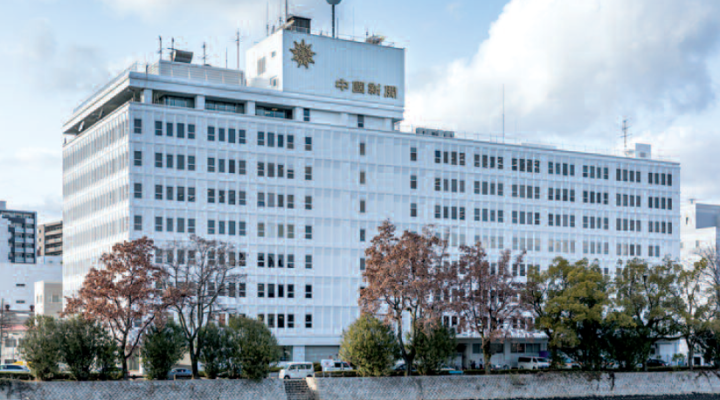 Opened in 1969, the current headquarters of Chugoku Shimbun faces the Peace Memorial Park.

For 125 years the Chugoku Shimbun has served the population, with whom they’ve shared both the good times and the bad.
If there’s one word to describe Hiroshima, “courage” would undoubtedly be the most appropriate, after everything the city and the prefecture that bears its name have lived through over the last century. The Chugoku Shimbun is a perfect symbol of this courage. Founded in 1892, this daily newspaper has lived by the creed of standing shoulder to shoulder with its readers since the very first issue, whatever the circumstances. This dedication was obvious from the beginning, even though there was already another influential newspaper in the town, the Geibi Nichinichi Shimbun, which once prided itself on being the fifth most read newspaper in the country, with a circulation of 56,000. However, far from working on behalf of its readers, the Geibi was little more than the mouth-piece for Okuma Shigenobu’s Constitutional Reform Party (Rikken kaishinto). That’s why the Chugoku Shimbun thought it necessary to move away from politics and to concentrate on providing useful information for its readers. With this commitment in mind, it was first printed on the 5th of May 1892. Even its name demonstrated its independence and who it wished to serve, with that focus made obvious by the two kanji which make up its name, Chugoku (Lit: “middle country”, the geographical region of west Japan between Kansai and Kyushu). However, even at this key moment in Japan’s history, with the tentative rise of democracy, the Chugoku could not completely cut itself off from politics. To distinguish itself from its competitor, it started to endorse the Association of Friends of Constitutional Government (Rikken Seiyukai). This rivalry lasted until the early 1920s when, in contrast to the Geibi Nichinichi Shimbun, the Chukogu Shimbun decided to break away from politics to dedicate itself to its primary mission: the dissemination of information. This choice was rewarded with a rapidly increasing readership that left its old rival trailing. In 1927, with a circulation of 50,000, it was well ahead of Geibi Nichinchi, which only had a circulation of 20,000 copies by then, and eight years later, the Chugoku finally took over control of its rival. The newspaper’s headquarters was one of the few buildings to be left partially standing after the 6th of August 1945.

Although the choice to turn its back on politics might not have been considered a form of “courage” by some, but rather a commercial ploy, nonetheless, the Chugoku Shimbun has never failed in its prime objective; to stand by its readers during both the best and the worst of times. The events that unfolded on the 6th of August 1945 stamped a seal on this commitment, as the newspaper, like the majority of people in Hiroshima, experienced the horror of the first atomic bombing in the history of mankind. The headquarters of Chugoku Shimbun was located 900 metres away from the epicentre of the nuclear blast, which killed 140,000 and completely razed the city within a radius of three kilometres. That morning, 114 employees of the newspaper, about a third of its staff, were already on site when the fatal flash destroyed everything. Looking at the photographs taken in the days following the bombing, one can make out a few buildings still standing in the midst of a landscape of scorched earth. The most emblematic of them all, the Atomic Bomb Dome, listed in 1996 as a UNESCO World Heritage site, can still be seen standing after the blast despite its proximity to the centre of the destruction, and so can the remains of the Chugoku Shimbun buildings. It was a heavy blow for the newspaper, with the brutal disappearance of more than a hundred of its workers, the destruction of its means of communication and it’s printing equipment. The newspaper was considered to be out of action for good, just like the city. “Hiroshima, contaminated by radioactivity, will become a barren land on which nothing will grow for 75 years,” the Washington post wrote on 8th of August 1945.
Despite the trauma and the visions of horror that they had to endure, those who survived, especially the staff of Chugoku Shimbun, were gripped by an overwhelming desire to rise above the catastrophe. While grieving for their friends and family, those who escaped the bomb’s devastating affects saw a sign of hope in the survival of their building or, at the very least, a sign that they should fight to rebuild their city. Since that day, the newspaper’s mission has been to support the refurbishment of the port city, and to speak out against nuclear weapons worldwide. It took a great deal of courage, and it’s no coincidence that the new headquarters of the newspaper, opened in 1969, faces the Peace Memorial Park, as if to demonstrate their commitment to continue to preserve the memory of that tragic day on 6th August 1945. In fact, on the next day, the 7th of August, reporters who had survived went back to work, and on the 9th, three days after having lost nearly everything, the Chugoku Shimbun itself reappeared, thanks to their colleagues in Kyushu and Osaka. This strong spirit in the face of adversity is shared by the Ishimnomaki Hibi Shimbun’s staff (See Zoom Japan no.18, March 2012), who, following the equally tragic, although very different circumstances of the 11th of March 2012, also decided not to give up, but to carry on working to disseminate information with what little they had left, even if that was only paper and marker pens. Almost 78 years after the atomic bomb, the example of these men and woman is at the heart of the newspaper’s commitment to daily life in the Hiroshima region. On this tourist map from 1947, published by the Japan Travel Bureau, you can see the Chugoku Shimbun headquarters (red circle) 900 metres away from the Atomic Bomb Dome (yellow square). Chugoku Shimbun is printed in Hatsukaichi, about fifteen kilometres west of Hiroshima. The presses operate from 23.00 to 02.30 to print the various editions, which are also distributed in Yamaguchi, Okayama and Shimane prefectures. More than 610,000 copies leave the printers daily and are transported to distribution centres. More than 95% of its readers are also subscribers, with the newspaper delivered to their letterbox early in the morning. The remaining copies are sold at news kiosks in railway stations. Since May 2016, Chugoku Shimbun has also been sold in supermarkets, which has brought in new readers. The national title won by the Hiroshima Carp, the local baseball team, in 2016, also helped promote the newspaper.

The Chugoku Shimbun is also committed to pursuing an educative approach to nuclear power and peace. This was its motive to launch the Hiroshima Peace Media Centre in 2008, which publishes articles in five different languages (Japanese, English, Chinese, French and Russian) on these themes, to make sure that the tragic events of 1945 can never happen again. “It’s a commitment we keep every day, the one we hold most dear,” the editor-in-chief tells us. When we ask about the most important event in the newspaper’s history, Egusa Noritaka answers unequivocally that it was the death of 114 employees killed on the 6th of August 1945 by the atomic bomb. We always return to this event from which the Chugoku Shimbun rose again from the ashes. Just as it’s about to celebrate its 125th birthday, the newspaper is having to prepare for another challenge, that of a declining population. The issue of regional revitalization is crucial, especially as the measures the government have announced over the years have yet to bear fruit. “Old ideas such as building new infrastructure to encourage activity don’t work anymore. It’s the same with government proposals to subsidize local councils that adopt policies inspired by larger cities. It doesn’t work here because everything’s on a smaller scale and there’s an ageing population,” explains the editor-in-chief. “At our level, it’s about prioritizing areas most susceptible to decline, by rediscovering what made them strong in the past and learning more about them. Keeping these areas in the spotlight could help draw attention to them, and maybe even encourage younger people to settle down there”. Egusa Noritaka is well aware of his newspaper limitations, but he wants it to be a useful tool for the benefit of the local population. He knows it will require lots of energy and courage to succeed, but these are two characteristics that he and his team certainly do not lack.