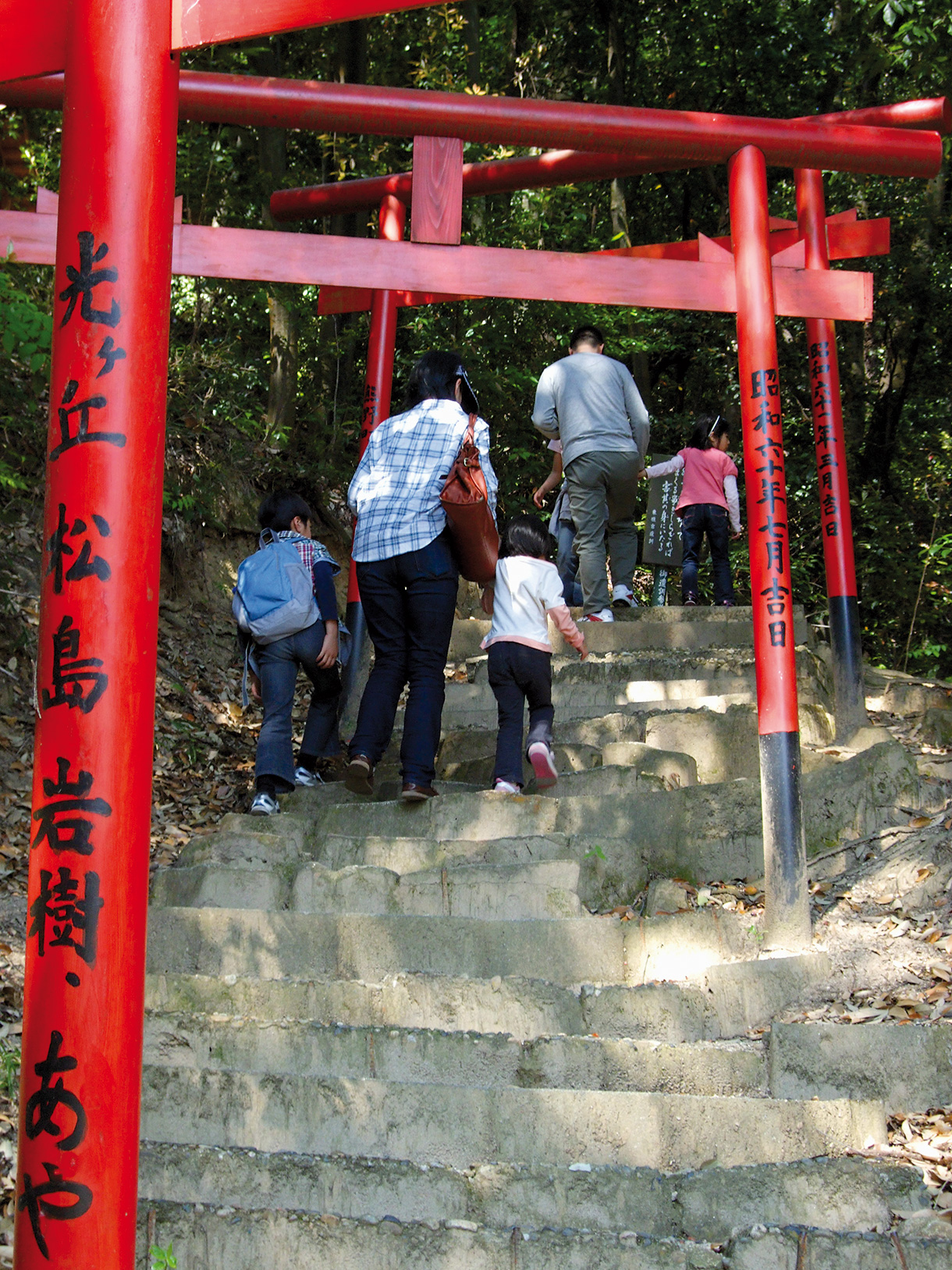 Those who wanted to see the first sunrise of the year started to make their way up this path much earlier.

Awidening band of silvery-grey light is spreading over the eastern sky. It’s just enough to illuminate the footpath up Mt Futabayama, on the outskirts of Hiroshima. The first part is easy, with the archway of 100 wooden torii cutting a bright orange swathe through the dense evergreen foliage. Then it gets trickier, with 140 metres of steep, narrow pathway through the forested hillside.

Fortunately, the sun won’t be up for another half an hour. Plenty of time to clamber to the top for hatsuhinode – the Japanese tradition of watching the first sunrise of the New Year, preferably from a place of natural beauty.

Everywhere is so quiet you could hear a bat cough. New Year’s Eve is the quietest night of the year here in Japan. Sure, in Shibuya and a few other trendy spots, you’ll find lively Western- style celebrations. But in the darkness beyond the big city lights, all is silence.

Today, January 1st, the entire country is on holiday, the only time of the year when that happens. It’s the most important festival of the year. On December 26th, Xmas decorations come down and New Year ones go up, the trees and tinsel replaced by displays of bamboo, pine and plum branches.

Popular sites like Miyajima Island will be packed with sunrise watchers this morning. Mt Futabayama may not be so spectacular, but it will be quieter. It also has the iconic silver Peace Pagoda, visible from all over town, and some sublime views of the island-dotted Inland Sea.

It’s not even six o’ clock, and already at least 100 other folks have assembled on the hilltop. A group of older men have built a bonfire to stave off the bitter chill. Two mini-skirted girls gaze enviously at the flames while their floppy-haired boyfriends ignore them and smoke cigarettes. Kids and dogs run around noisily being kids and dogs. An elderly lady sells sake, green tea and mochi rice cakes from a stall, while incense wafts across from an altar set up below the Peace Pagoda’s giant gold statue of Buddha.

“The sun is due to appear at any moment,” a man with a megaphone supplies the crowd with regular updates.

As the silvery band takes over more and more of the sky, ghostly islands emerge out of the sea like dragons’ tails, while the street lamps of the sleeping city twinkle like orange stars. Suddenly, the sound of drums banging and voices chanting interrupts the calm. Enter an orangerobed Buddhist priest followed by a flock of five. No-one looks at them.

Just then, above the distant mountains where the sun ought to be, a spoil-sport band of dark cloud has settled like a dirty scarf, much to the consternation of Megaphone Man, and everyone else. What if the unthinkable occurs, and with all these people waiting for the year’s first sunrise, the sun doesn’t show up?

But then, quite magically, it happens. Like a curtain parting on a cosmic stage, the perfect red ball of the sun melts its way through the frozen clouds, drawing a collective gasp of awe from the crowd. In an instant, the sea turns from shark grey to dazzling liquid gold, with diamonds dancing on the crest of every wave. The drumming and wailing reaches as much of a crescendo as five people can reach, lending a primeval tone to the proceedings. Mountains still lined in night mist shimmer like gold dust as they are struck by the first fingers of New Year sunlight. Nothing like a healthy dose of awe to start the New Year. It’s timeless, beautiful and…

Megaphone Man announces that the sun has indeed come up, whereupon everyone throws their hands in the air and gives three hearty cheers of “banzai”, meaning (may you live) 10,000 years, followed by a polite round of applause.

And with that, it’s all over. Within five minutes everyone’s gone home. And as the sun climbs higher, bringing colour back to the world, the magical moment of grey and gold has gone. Now, as Anouilh’s Antigone put it, “It’s like a postcard, all pink and green and yellow”.

Meanwhile, back down the hill, the streets remain deserted, except for a family out in the street, gathered round a stone basin pounding a huge mound of rice with wooden mallets. They’re making the traditional New Year mochi rice cakes. Where is everybody? To find them, just pop down to the nearest Shinto shrine. That’s where they’ll be. In their thousands. People began going at midnight last night and will continue doing so for the next four days or more. Toyko’s Meiji Shrine alone will receive some 3 million visitors. It’s the tradition known as hatsumode – the first shrine visit of the New Year. Firsts are considered very auspicious at this time of year: first sunrise, first visit to a shrine, first tea ceremony. There are even words for your first laughter (waraizome) and your first dream of the year (hatsuyume). But it’s the first shrine visit that really matters. Hiroshima’s biggest and most popular shrine is Gokoku Jinja, alongside Hiroshima Castle, so it’s the ideal place to experience hatsumode. The whole city is here: from women in their best furtrimmed kimono to designer punks with their dyed pink hair and platform-booted girlfriends. People of all kinds and ages throng the paths around the shrine.

Before the main shrine building, an enormous but orderly queue has been inching its way toward the steps since midnight. Yet the atmosphere remains cheerful. There’s a rigid protocol to follow: first wash your hands in the large stone basin at the entrance, using a long bamboo ladle, in an act of ritual purification. Then it’s off up to the main shrine building where you clap twice to awaken the shrine deity. Bow, throw money into a huge box lined with a white sheet and make a wish. Students wish for success in their exams. Other folks might wish for good fortune in business or good health.

With the wishing over, it’s time to visit the stall where you hand in last year’s lucky arrow and buy a new one, to ward off evil spirits for another year. Then, another stall to get an omikuji fortune paper. It might forecast excellent, average or bad fortune. If it’s good, you keep it in your purse. If it’s bad, you tie it to the nearest tree, hoping that the bad luck won’t follow you around.

Finally, a visit to the stalls selling charms and amulets for every imaginable wish: passing tests, finding a marriage partner, finding a job, health, prosperity, safe driving and so on. One woman proudly shows us a tiny gold rake she’d bought to keep in her purse (to bring money), a lucky cat keyring (same reason), a tiny ceramic frog (to ensure she comes back safely from any travels). Plus a special amulet for warding off general harm, because she turns thirty-two this year, considered to be a bad luck year.

With all the good-luck shopping done, you’ll need some nourishment. Fortunately, a maze of stalls crams the paths around the shrine, selling great steaming mounds of goodies, perfect for keeping out the cold. Whole grilled squid, octopus tentacles on a stick, stone-roasted sweet potatoes, takoyaki octopus dumplings, colourful mountains of grilled ramen, toasted mochi rice cakes skewered on bamboo and laid out on beds of straw, bubbling oden stews of fish, boiled eggs and squares of konyaku jelly, okonomiyaki pancakes crammed with vegetables, bean sprouts and slivers of meat. The air is thick with the sweet smokey tang billowing from a hundred hot plates.

This is, after all, the Festival of Festivals, the most important date in the Japanese calendar, another new beginning in the eternal cycle of change and renewal. So why not begin it on a surge of positivity, with a hefty dose of mountain- top awe, a few good luck charms and an open-air feast?