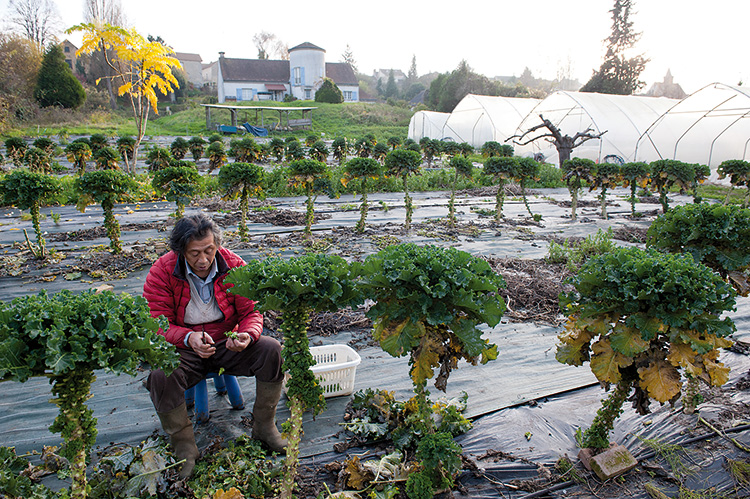 Yamashita Asafumi chose to cultivate his garden in Chapet, in the department of Yvelines.

In the western suburbs of Paris, Yamashita Asafumi has developed a veritable philosophy of gardening.

One morning in autumn, we went to meet Yamashita Asafumi, a 3-star market gardener, who grows vegetables for Michelin-starred chefs. But, these gold stars aside, he is a passionate and fascinating autodidact. He’s a man who talks about vegetables in the same way he talks about people. A philosopher of vegetable gardening.

After a short journey from Villennes-sur-Seine station, we arrive in Chapet, a charming little village in the department of Yvelines. We drive down a little road with very few houses and arrive at Yamashita’s farm. A small, wooden, rain-faded sign indicates we are in the right place. We make our way towards the house; the grass has grown tall in the summer heat. The headgardener and his wife, who’s in charge of the kitchen (sometimes, it’s possible to arrange to have a meal prepared by her using Asafumi’s vegetables), greet us at the door. We enter the spacious living- room, take off our shoes to place our feet in the warmth beneath the kotatsu (low heated table), the only Japanese touch in this large Western living-room.

While we drink green tea, he recalls his first steps in France, in 1976. He came to study art in Paris and all he knew how to say in French was “Je t’aime” (I love you), “rendez-vous” (meeting), “ensemble” (together). Laughingly, he admits that was little help when he needed to ask where the toilets were! He learned French at the Sorbonne, studied for some years, then returned to Japan. In 1989, he settled in Chapet, a small village in a western suburb of Paris. It offered all he needed: a Japanese school where his daughters could study, but also space for him to grow his bonsai (then, following the theft of his beloved miniature trees, his vegetables), and a peaceful neighbourhood. He rarely sees his neighbours, which suits him down to the ground. Friendships are formed from among those he meets with whom he has an affinity: artists, head chefs… people with a passion with whom he can share his love for what is good, beautiful, and work well done. His love for France wasn’t love at first sight, but grew out of successive encounters and a process of getting to know each other. Slowly, gently, while watching and listening.

When talking about his vegetable garden and asking what the previous summer was like, Asafumi’s eyes light up with child-like joy. He recalls the heat, the vegetables that appeared early, the kabocha (pumpkins) harvested in August. “I sold all of them in August-September,” he says. He had thought a lot about the best way to water them: he researched, tested, created slopes and mounds, dug furrows. We leave by the back door to see what’s nearest the house. Two dogs and some hens watch us go by. Then we enter the kingdom of cabbages, all covered in morning dew. They’re large and vigorous, they’re doing well. We make our way towards the glasshouses filled with seedlings, some of which are heated in a structure he has made. The tiny plants are incubated like new-born babies. He explains that he sometimes uses a rota system to water the seedlings: he waters a first group of seedlings, another two weeks later, and a third group two weeks after that. In 2018, he tried out a gravityfed irrigation system on a bed of spinach, where the water flowed through three channels.

There’s always a bit of Japan to be found in his vegetable garden: it’s provided by the seeds as well as some of the cultivation techniques he uses. He shows us some flat hoses he had sent from Japan, and explains how they deliver a very fine spray sideways, which falls in a curve under the leaves so as not to wet them… “as the leaves don’t need to become wet, they don’t like it.” Experimenting, trial and error, researching, starting again, this autodidact retains his creative mindset. “You must always empty out, change, innovate, otherwise you’ll rot inside!”

For his vegetables, too, he’s continually on the search and moving forward. His seeds are Japanese, his soil is French, and he likes to use the same spot to grow different kinds of plants. When he cultivates a new species, he abandons another. For instance, this year he has grown elongated shaped kabocha (squash) and a species of small melons. Usually, they are the size of tennis balls, but “I don’t know why, here they’re bigger.” He also shows us some tiny tomatoes”. In Japan, they’re called micro-tomatoes. They grew all by themselves this year. I had cultivated them a long time ago, so there must have been a few remaining seeds in the soil.” They look very attractive and should appeal to chefs. They also taste good, especially at the end of the growing season.

He’s an artist who enthusiastically describes the taste of his vegetables. He talks delightedly about the different tastes. The taste of the chestnut kabocha, which aren’t found alongside French squashes, the changing flavour of the kabu turnip, his iconic vegetable, which sometimes tastes like a persimmon, sometimes an apple, even a pear.

Turnips are unpopular due to their often unpleasant and bitter taste, but those grown by Asafumi once again feature in restaurant dishes. Their flavour and fresh taste mean they are quite delicious, and only need to be peeled to enjoy their tasty flesh, at which time everyone asks themselves whether it’s a vegetable or a fruit!

And if you ask him why the flavour of the turnips is so varied, he scowls and tells us it’s not necessary to try to explain everything, and that the god in charge of his vegetable garden is a “lunatic”!

We taste the tomatoes, which still look good now at the beginning of October. As a surprise, he makes us taste two tomatoes, one that had benefitted from direct sunlight and another from only indirect sunlight. What a surprise to find how differently they tasted!

Does he have secrets? Does he use magic? No, he just adapts to the soil (his is clayey and difficult to work). He also admits, standing in front of the glasshouse with his sweet potatoes still covered in warm earth, that he will have to use a brush like an archaeologist to remove the clay soil that sticks to them! When will he pick them? It’s the vegetable that decides. The same for the watering. Observing the plants closely allows him to decide when they need to be harvested or watered.

Listening to Asafumi talk, you can feel a sense of serenity and harmony emanating from him, like the Wa, Kei, Sei and Jaku elements in the Japanese Way of Tea outlined by Sen no Rikyu: Wa for harmony with others and nature, and positive interactions with the world that surrounds him; Kei for the respect he has for others, what they say and their way of understanding the world; Sei for purity, an idea that’s dear to him — purity of the body, but also of the spirit, the heart and the soul (kokoro), which you need to “empty” regularly, so that it doesn’t become rotten, and to make room, as he likes to put it, for a new perspective that’s curious, non-judgemental but always filled with wonder; and, lastly, Jaku for the tranquility that emanates from him, a spiritual serenity open to greater responsiveness. It’s a philosophy he himself has named No Do (The Way of the Vegetable Garden), in a book of the same name.

His legacy and how to pass on his know-how is a subject he’s very interested in, which he’s thought long and hard about. In Japan, it’s often handed down from parent to child. But, he laughingly admits that children generally don’t want to do the same as their parents and make different life choices… Perhaps it will jump a generation? However, he has a strong desire to pass it on.

His legacy has taken the form of his book, No Do, a bilingual account richly illustrated with photos of his vegetable garden, in which he explains that it’s necessary to thank the earth for what she offers us, to let go of our vegetables as we let go of our children, water gently, combine plants so they can grow together, dare to create space, and remove things if needed, rather than always add.

He also passes on his philosophy through the sessions he organises in schools. It’s not a technique, more a way of thinking. He talks to professionals and to children in just the same way. He tells them to observe, feel, understand the needs of the plants — they know how to communicate! You won’t find any YouTube videos to learn how to grow kabu turnips “à la Yamashita”, but you can become imbued with his philosophy by walking with him, step by step, row by row, in his enchanting vegetable garden, protected by a kami (god)…

No.67 [TRADITION] New Year in the Archipelago