This city of 88,000 inhabitants has decided to gamble on the future and teach children the art of eating well. 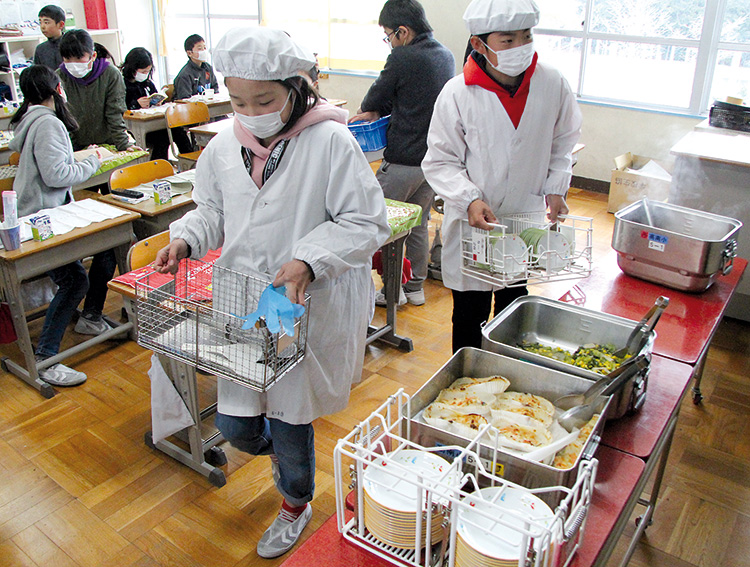 Meals are served in the classrooms by the pupils themselves.

When the lunch bell rings in konan elementary school in Fukuroi, in Shizuoka Prefecture, everyone knows what to do. As in many other Japanese schools, the tables are rearranged and meals are eaten in the classroom. It’s the pupils themselves who take turns to serve their classmates. Supervised by adults, those whose turn it is don a white coat and a hairnet, wash their hands and go down to the ground floor to collect the trolleys containing the hot meals, delivered a few minutes earlier in a van from the central canteen. on today’s menu there’s samara, a local fish served in a sauce, vegetable soup with pasta, and two slices of bread with chocolate spread. To drink, there is a carton of milk.

The children are familiar with the process. They collect the containers of hot food on trolleys, stack the trays, put out the cutlery and chopsticks. Their fellow pupils queue up and wait patiently until everything is ready. when it’s all been set up like a cafeteria, the children each take a tray and are served by those in charge for the day. The latter conscientiously serve out the carefully prepared meals onto the plates. once the children have been served their meals, they have exactly twenty-five minutes to eat, not a minute more. “we hope the children will concentrate on what they are eating,” explains KOBAYASAHI Mihoko, the nutrition teacher attached to the school since 2005. “once they’ve finished, they can talk to each other and go to play in the courtyard. Not before.” As soon as the food is on their plate, they must sit down and eat or risk having the unfinished meal removed at the end of the allotted time. KOBAYASAHI Mihoko intervenes during the meal “so that the children will think about what they’re eating.”

“I talk to them for a few minutes during the meal about the food they’re eating. I tell them where the ingredients come from and the food groups they belong to. My role is to teach them about a healthy and varied diet, to encourage them to improve their eating habits and persuade them to give proirity to vegetables and seasonal products. I also make them aware of waste by telling them all about the work of the local farmers, for example. Throwing away food is all about a lack of respect for those who’ve worked hard to provide it, and the children are very open to this argument. It encourages them not only to finish their meals but also to try something they wouldn’t want to eat in the first instance,” she adds.

When the meal is finished, the plates are almost all empty. Ryusuke, aged 11, doesn’t like the fish served today, but eats it nevertheless, with encouragement from the nutritionist and his classmates. “It’s important to try it,” he says between mouthfuls, without great enthusiasm. The rest of the class appear to have been won over and are delighted they can finish their meal with a chocolate spread sandwich. once the room is cleared and the rubbish sorted, the children go the bathroom to brush their teeth, and the ceremony comes to an end. In Fukuroi, the amount of waste food collected shows that 95% of the town’s pupils finish their whole meal. It’s an achievement envied by other cities in Japan, an increasing number of which are coming to visit to learn more about this innovative programme. “young children adopt the eating habits they’ll have in adulthood. So it’s now, at school, that there’s everything to play for and they should be taught good habits and practices for the future.”

ISHIZUKA Koji keeps a close eye on the programme. He is one of the people in charge of the central canteen and oversees the city’s school meals service. He was the one who instigated this successful nutritional programme, which was awarded a prize last year for good practice in the educational sphere at the 8th Global Conference of the Alliance for Healthy Cities in Malaysia. His idea was simple but extremely effective: by dramatically improving the links between the 26 producers of food in the city and the central school meal canteen, he ensured that Fukuroi was able to create and deliver a variety of balanced meals to a large majority of the city’s school children while, at the same time, boosting the local agricultural economy. “A nation-wide study highlighted the fact that in the country as a whole, the diet of Japanese children was very deficient in calcium and that some groups of food rarely appeared on the menu,” he tells us. “we thought about how to overcome these problems so as to optimise the nutritional benefits of each meal while making sure they remained tempting for the children.” The kitchens of the central canteen in Fukuroi, which were launched in 2013 and employ 80 people, provide food for fourteen nursery schools, eighteen elementary and four primary schools, have only one rule to follow: no skimping on either taste or quality. And to achieve this, when beef burgers are served to Fukuroi’s schoolchildren, they are made entirely by hand, as are the harumaki (fried spring rolls). yet another example is that, before being cooked, all the vegetables are hand washed, and leafy vegetables such as cabbages are spray rinsed in order to “remove all the dust and stubborn insects.” This procedure – with its many precise details – is unique, even in Japan. The menus are never decided in advance; it’s the teaching staff, with the support of the nutritionist, who devise the menu each month depending on both what is available and nutritional requirements, but also what the children like to eat.

“We know they’re very fond of fried chicken, meat, and vegetable croquettes. we try to include their favourite foods with other dishes to create balanced meals,” he explains. Finally, dishes are also adapted for children with allergies so that they “can eat the same meals as the others,” but prepared without the ingredients they cannot eat. The local government finances the entire running costs of the canteen and the employees’ salaries, and parents pay ¥250 (£1.70) towards the cost of every meal. In addition to balanced meals, the children receive lessons about nutrition and what they need to eat, always in the hope that these good eating habits will be replicated in their homes. one of the important goals for ISHISUKA Koji was to succeed in increasing the quantity of vegetables consumed by the children so that they would continue to eat them in the future. “It’s a good way, it seems to me, to lower medical spending in the future. Good eating habits are the best guarantee of good health in adulthood,” he assures us. This is the reason why, in five years, “the amount of vegetables eaten by children has risen from 89 grams to 104 grams per meal. By giving priority to local seasonal produce in our kitchens, we’ve also been able to boost the volume of local agricultural production, by increasing the amount we use from 8% to 31%.”

It’s 10 o’clock in the morning, on 62-year-old SuzukI Toshiyuki’s small farm. 10 years ago, he gave up his salaried job in business to become a farmer and produce vegetables such as bok choy (Chinese cabbage), as well as spinach or its Japanese equivalent, komatsuna. Bok choy is one of the mainstays not only of local production in the city of Fukuroi, but also for the kitchens of the central canteen, which is one of this local farmer’s most important clients. He alone represents “an annual volume of 10 to 12 tonnes,” he says delightedly. “It’s quite an easy vegetable to cultivate, even in winter, as it doesn’t need a lot of care and grows well in greenhouses.” It can be harvested about forty days after germinating. He uses only organic fertilizer in the soil to grow his vegetables – no chemicals. And to water his plants, SuzukI Toshiyuki has opted for a system that reproduces the effect of light rainfall for one hour every day in his plastic covered greenhouse.

Not far from his young cabbages, the farmer has set up a small table on which he has spread drawings and words of encouragement and thanks from the pupils from konan School. “They regularly come to visit the farm,” he smiles. “we sometimes organise workshops on the farm, where I and my wife explain how we produce vegetables. And sometimes, the children invite us to come to share their lunch at school, they’re really sweet. I have four children, and my grandchildren are at the nursery school or in Grade 1. So it’s very moving to see these little ones showing an interest in my vegetables,” he confides. He thought of giving up farming at 60 years of age, but encouraged by the children, and “as I’m in good health, under these circumstances, I can see myself cultivating my vegetables for the next ten years at least.”