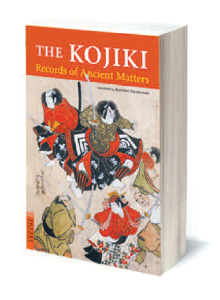 Compiled in the year 712, it is about time you were introduced to the ‘Record of Ancient Matters’, a monument of Japanese culture.

In turn a cosmogony, a theogony, an epic, a history manual, a collection of songs, embracing the birth of gods and their cults, the Earth and its multiplicity of names, men and their verses, the Kojiki is a complete anthology”. These are the words chosen by the French editor of the ‘Record of Ancient Matters’ to describe this monumental work of Japanese culture. It was reviewed and adapted by the French writer Pierre Vinclair.

Complied in 712, exactly 1300 years ago, this anthology occupies a supremely important position in the history of Japanese literature. Divided into three volumes, the Kojiki starts with the creation stories of the Sky and the Earth, the birth of the gods, and the formation of the Japanese islands, including the connection between the gods and their various deeds. It also tells the stories of the country’s almost legendary emperors, starting with Jimmu and ending with other historical figures such as the empress Suiko, who ruled from the end of the sixth century until the beginning of the seventh. The role of this book is essential in legitimizing the imperial leadership, according to which emperors are the direct descendants of the gods. In fact, it can be read in the Kojiki’s introduction that when ordering the compilation of this anthology, emperor Temmu declared, “This book is the backbone of the State, the foundation of imperial influence”. And no emperor ever contradicted this. It was only after Japan was defeated in 1945 that the emperor lost his divine recognition. A great part of the Kojiki is focused on the quarrel between Amaterasu, goddess of the sun, and Susanoo, god of storms, the latter ending up being banished from Earth. Susanoo’s deeds are also described, he is said to be good-hearted on Earth although he was mean-spirited in the Sky. The story of Okuninushi, Susanoo’s son, and what he gets up to in Izumo province (in the west of the archipelago), also figures in the text. The eponymous sanctuary dedicated to Ôkuninushi was built in that region. It is one of the oldest Shinto sanctuaries in the islands. In 2013 a grand ceremony will take place to celebrate the return of Ôkuninushi’s spirit, which has lately been forced to move out because of the renovation work on the sanctuary. The large number of myths (around a third) connected with this region illustrates how important it is. The Kojiki also legitimizes the imperial dynasty of Amaterasu’s descendents. It recounts the story of “the surrender of the country”, which allows them to take the upper hand. That is how Ninigi, the grandson of the goddess of the sun, descends to earth and founds the court of Yamoto, whilst his great grandson, the emperor Jimmu, founds the line of imperial leaders, which continues to this day. It is a unique story in the history of the world, but the Japanese do not question their founding myths despite the fact they might have been adapted to suit the political needs of a particular period.
That does not detract from the fact that this 1300-year-old book is one of the oldest texts in the archipelago and that it greatly helps in forming a better understanding of Japanese culture. The philosopher Katô Shûichi says that, “the most beautiful and inspired pages in the Kojiki are nearly always related to love, especially the lovers’ flight from their father’s house”, and he cites the tragic example of prince Karuno and his stepsister Karuno-Oiratsume. Karuno was exiled because of their forbidden love, but his sister followed him. “According to the Kojiki, the banned couple decide that without love, their home and country hold no significance for them, and after singing love songs at length to one another, they end up committing suicide together. The concept that love finds supreme accomplishment in death is very common in Japanese literature that followed on from the Kojiki”, he notes. This clearly suggests the important place this anthology occupies in the country’s culture. Professor Ueno Makoto stresses this as well (see interview, page 15). According to him, by reading the Kojiki and its founding myths, one succeeds in better understanding how the Japanese think and behave. So it is worth a try!