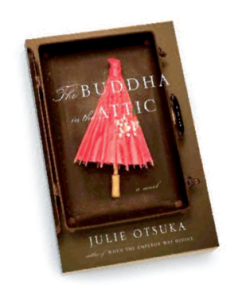 By continuing the work she started with her first novel, Julie Otsuka forcefully evokes the conditions of Japanese immigrants in America.

On the boat, we were mostly virgins. We had long black hair and flat feet and we were not very tall.” It is with these words that Julie Otsuka starts her new novel. In this, her second novel, the American of Japanese origin delivers an account of the life of Japanese women, who left the archipelago during the last century to flee poverty and get married to compatriots, who had themselves previously left Japan to make their fortune in the United States of America. Japanese emigration to the US started in 1890. That year, 148 arrived. Twenty years later, there were over 150,000, but their presence gave rise to many problems, and Japanese immigration was officially suspended by the US in 1924.

Following her first novel, When The Emperor Was Divine, distributed by the same publisher in 2004, in which she described the way immigrants of Japanese origin were mistreated and locked up in concentration camps during the Second World War, this time she pursues the quest for her roots. “I built up a picture of myself from what I knew of my own family history. My grandfather was suspected of being a spy for Japan and was picked up by the FBI on the day Pearl Harbour was attacked (7 December 1941), and sent to camps in Montana, Texas and New Mexico. My mother, my uncle and my grandmother were all interned in Topaz, Utah, for three years. My family has always been discreet about what happened during the war, and in a certain way, writing this novel allowed me to reach beyond this wall of silence,” she said, back in 2004, when her first “serious” fiction, as she called it, was released. Similarly, The Buddha In The Attic required a great deal of hard work from the young woman. “It slowly took me over completely,” she explains. However, and here lies the story’s strength, the writer never falls into pathos, and opts instead for a pared down style, resulting in a certain distance with the subject that allows her to avoid the use of vocabulary designed to play on the reader’s emotions. Of course, that does not prevent emotion from being present, quite the opposite in fact.
In the same way that rough textured ceramics can be beautiful, Julie Otsuka’s second novel makes quite an impression. In her first novel, she had already begun her stylistic plucking away of any sentimentality in order to give the reader freedom to get to know the characters, the majority of whom are unnamed. In The Buddha In The Attic, none of the women, linked by stories of misfortune in an unknown land, have names. The main difference, this time, is the omnipresence of the collective “we”. “We spoke seldom. We ate little. We were gentle. We were good. We never caused any trouble and allowed them to do with us as they pleased. We did not bother them with questions. We never talked back or complained. For most of us were simple girls from the countryside who did not speak any English and in America we knew we had no choice but to scrub sinks and wash floors.” These few sentences summarise the atmosphere in the novel that cries out to the deepest corners of the reader’s consciousness. He cannot be insensitive when reading this detailed account of the lives of individuals who might become part of his daily life one day, and in whom he might have very little interest, only slight disdain. Ultimately, these Japanese women could have been like the Senegalese, Gypsies or Tunisian women who are a constant presence in modern day Paris, and of whom we take little notice. One day, they might just disappear, as did the Japanese in 1942. “The Japanese have disappeared from our city. Their houses are boarded up and empty now. Their mailboxes have begun to overflow. All we know is that the Japanese are out there somewhere, in one place or another, and we shall probably not meet them again in this world.” In the last chapter, Julie Otsuka revisits the first chapter of When the Emperor Was Divine, called “Evacuation order n°19”. The novelist takes us back in time, and underlines how society’s response to immigration issues has barely evolved over the past century, although she never preaches, leaving the reader to make up his own mind about his attitude towards foreigners.