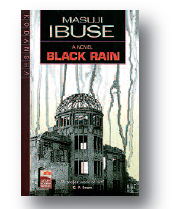 Five years after the atomic bomb explodes, young Yasuko is living with her uncle and aunt in a village near Hiroshima where they took refuge after the city was destroyed. Graceful, clever, and gentle, Yasuko has yet to find a husband. A rumour says she was caught in the shower of black rain that fell over the western side of the city after the monstrous atomic cloud had risen into the sky. The rain was radioactive. Nevertheless, she shows no sign of illness, so in order to find her a husband, her uncle decides to prove that it is only a rumour and that she was not affected. To achieve this, he uses the diaries that he and Yasuko kept at the time. These diaries are the backbone of the story. The smallest details guide the reader through this horrific event. He is able to imagine all the suffering that was endured immediately after the explosion, and over the following years. Those who were not killed immediately went on to suffer unimaginable agony. This book is a must-read if you want to find out and understand what really happened on that day; or maybe, on the contrary, to refuse to understand, and rather question how mankind could ever have taken the decision to drop such a disproportionate weapon of death on fellow human beings.