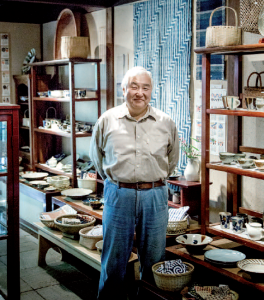 One of Miyamoto Tsuneichi’s former students says it is essential to continue supporting the work of craftsmen.
Situated down a street in the old town of Kamakura, Kuno Keiichi’s shop looks like a museum. Finely chiselled potteries, ceramic tea sets, old-fashioned baskets and indigo dyes are all displayed along the length of a large traditional wooden room lit by a garden window. Nevertheless, the property owner says these are not art objects. To this lover of mingei, these pieces collected from all over Japan have a daily use and are sold like any other plate or tea bowl that can be found in a shop. He speaks of the respect these objects inspire in him, with their fundamental values of simplicity and honesty.

How did you come across mingei?

K. K. : When I was a student at the University of the Arts in Musashino, I had a famous ethnography teacher called Miyamoto Tsuneichi. His teaching related to Japanese minorities. That made me want to travel throughout Japan and that is how I found out about mingei. I have had this shop for 40 years now, and I opened it to promote this kind of craftwork.

What is the difference between mingei and other forms of craftwork?

K. K. : The aim is different. A mingei craftsman makes useful objects whereas most craftsmen nowadays make pieces to be exhibited. They sign them with their name hoping to become famous. The cost and the aim of the object are completely different. A mingei piece doesn’t have a brand. It has no name, except for the region in which it was created.

How do you explain the separation of craftsmen from the utilitarian aspect of craftwork?

K. K. : There are fewer buyers. A very small percentage of Japanese use mingei objects. Thus craftsmen become artists. That allows them to promote their work better. It’s a hard job to have nowadays, but there still are mingei craftsmen all over Japan. But I am the only one to have a shop in Kamakura with mingei products.

Are blacksmiths considered part of mingei?

K. K. : Blacksmiths make blades for Japanese swords with an incredible finish to them. However, with the abolishment of the right to keep and bear arms, many converted to making hôchô, the famous kitchen knives. They are everyday utensils, but they require special techniques that aren’t considered part of mingei. They don’t consider themselves as part of the mingei movement. Mingei brings together people who like neither blades nor blood. It’s a pacifist movement.

What are the characteristics of Japanese mingei in comparison with the other traditional craftsmen in the world?

K. K. : Japan has four very distinct seasons with a very humid climate. The wood and the other materials used in mingei reflect these particularities. Then, there are regional particularities that have been developed by craftsmen since the 17th century. They created original pieces with local characteristics. These inspired the mingei craftsmen. France is full of regional wines with their own specific features, and in the same way, Japanese craftwork has patterns and colours that change from one area to another. The renewal of agriculture also encouraged the production of new implements inspired by mingei. This regional diversity has always been preserved. I believe that this is the foundation of originality in Japanese folk art.

Can one say that traditional Japanese craftwork influenced the development of “made in Japan” technology renowned throughout the world?

K. K. : I believe so. The know-how and the advanced techniques that exist today were already visible 1,200 years ago. In other countries, the changes in leadership brought on great changes in the population. In Japan, when the government changes the people stay the same. That is maybe why ancient techniques have been handed down to the present day.

What is the essential value a mingei craftsman should hold on to?

K. K. : The transmission of know-how. For example, a good craftsman won’t change an object that has been made and remade the same way for centuries. He will pass it on when it’s his turn without adding any change or improvement. The willingness to keep this process of transmission unchanged is very important to the mingei craftsmen.

Are there many copies or forgeries?

K. K. : They aren’t really any forgeries. They are mostly imitations made in China, as well as in Japan. They are aimed for sale on a large scale. They are cheaper. One of my skills is the authentication of mingei pieces.

Can lovers of mingei recognise where a piece is from?

K. K. : Yes, every region has its own particular patterns that allow you to distinguish it when you know them. The pottery from Oita prefecture has a design that has been in vogue for the past 50 years. Ceramics from Okinawa or Kagoshima are recognisable by their blue colour. The definition of mingei is both wide and narrow.

Do you know what it really covers in Japan?

K. K. : No, very few people know what mingei really is. Authentic mingei is very rare nowadays. Everyday objects are nearly always made in factories because it’s cheaper to do so. Nevertheless, there are still people who are concerned with transmitting the traditional know-how and I am here to support them.