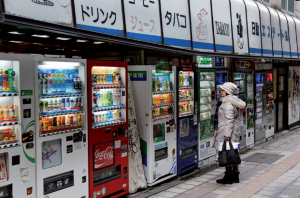 They are everywhere. From the north to the south, on top of Mount Fuji or under the sea and they are in service around the clock, adapting to evolving technologies and the changing habits of consumers.

There are three elements in the Japanese landscape that can be found all over the country: the train, Buddhist temples or Shinto sanctuaries and vending machines (jidohanbaiki). With a distribution of one for every 24 people and close to 5.1 million units spread all over the archipelago, there are more vending machines in Japan than in any other country. It is no exaggeration to say they are to be found everywhere, with machines on top of mount Fuji at a height of 3,776 meters as well as at 145 meters below sea level in Yoshioka Kaitei station situated in the Seikan tunnel, which connects the islands of Honshû and Hokkaido. There is a vending machine at the northernmost tip of Japan on cape Soya in Wakkanai, Hokkaido, as well as on Okinawa’s southernmost occupied island, Hateruma. It’s hard to travel in Japan without taking a train but it’s completely impossible not to come across vending machines, whether they sell drinks, cigarettes, or umbrellas. Supermarkets that now open 24/7 could have endangered their existence but vending machines are thick skinned and are far from ready to give ground. A friend recently pointed out that between his house and the station, just 600 meters away, there are 47 different dispensers. He can get rice, batteries, tobacco, fruit, ice cream or condoms. The number is surprising but it reveals a way of life in which relating to a machine is as normal as buying from a sales person. In a country with very little available space, these machines ensure an ideal service that takes up very little room. They are also beneficial for retailers as another not insignificant source of income. In short, everybody benefits from them. All the more since vandalism is not customary in Japan. They are too useful to be targeted by thugs, although it does happen from time to time.

The Japanese aren’t all angels, and, there are even dispensers that provide goods forbidden for minors. To prevent those who are under age (in Japan, the legal age for smoking is 20) from buying cigarettes from dispensers (a problem that was quite common in the past), the authorities and the industry have created machines that require a card to prove one’s age. Just because they’re automatic, it doesn’t mean they’re stupid. All these machines are subject to technological developments to keep people using them. Some time ago, Coca Cola Japan placed drinks machines in some areas with Internet access where people could use their mobile phones to connect to them to find out about local events such as concerts and other activities. Of course, it was set up so customers had to buy something before accessing any information. Even better, Sanden, in partnership with Okaya Electronics, has created an intelligent dispenser capable of identifying whether the customer is a man or a woman, young or old and then offering them appropriate products. Its large touch screen is animated, which contributes to making the experience both fun and practical, and bodes well for its success. On the practical side, the machine can also give vital information about the local area in emergency situations, such as after earthquakes.

On its website, Coca Cola Japan also reminds people that most of its machines are connected to a national network that not only allows them to keep track of how many drinks are still available but also allows them to respond if there are any problems. The company makes a point of the fact that in the event of a serious disaster (such as the Noto peninsula’s earthquake in 2007 and after the disasters of the 11th of March 2011) it ensures the free distribution of drinks from its vending machines. In 2011, the brand’s 400 dispensers that remained in service in the region hit by the earthquake gave away over 88,000 cans. The famous drink company understands the importance of good communications in relation to its machines. In November 2012, while a national debate about the future of the country’s energy production was taking place, the brand announced it would start installing machines with lower energy consumption and since the beginning of January these machines have been consuming 10% less energy on average than the previous generation of dispensers. It’s great publicity but it’s also a civic gesture from a brand that owns 980,000 vending machines throughout the country and occupies the leading position in the market, with its 40% share. You can distinguish a new dispenser from an old one by the polar bear on its front and sides. In other words, the conscientious customer will be more inclined to buy from Coca Cola than from others. It is important for the owners and manufacturers of vending machines to keep a close eye on the market though, as they have been generating progressively less and less income over the past few years. In 2000 there were 5.6 million of them in service throughout the archipelago, 9% more than in 2012, and during this period, turnover generated by these machines has decreased by 25%. The manufacturers need to adapt to changes in consumer habits. Sweet drinks (42.2% of machines) aredecreasing in popularity and people are eating more fruit than previously. That is why machines selling bananas and apples are now replacing those that were full of fizzy drinks. And rest assured, despite the drop in numbers, jidohanbaiki are still very much part of the Japanese landscape.