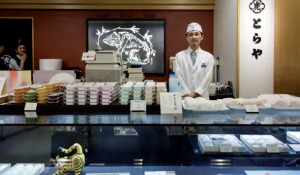 Set off on an adventure to discover one of Japan’s best-kept secrets: the basements of large department stores.

According to some foreign visitors, Japan’s so called “depachika” are among the country’s best-kept secrets. The word “depachika” is made from “depaato” meaning department store and “chika”, which means a basement, and refers to the large scale food halls found on the basement floors of major Japanese department stores. It’s easy to see why an American or European traveller would be dazzled by these places. You would be hard pressed to find something even remotely similar elsewhere. Even the world-famous luxury food department at Harrods in London wouldn’t stand a chance in a battle with one of the many depachika in Tokyo. So it’s easy to understand why the tourists go WOW when they enter these temples to glamorous consumption, but why do the Japanese like them so much? After all, most products sold at a depachika are anything but cheap. Yet the locals keep going again and again, so much so that these basement- floor markets bring in up to a quarter of the entire department store’s revenue.

Zoom Japan, being a very curious magazine, ventured into one of the most hallowed of these temples, Takashimaya’s flagship store in Nihonbashi, to learn the secret of their success. The place is packed with smartly dressed women, but we first decide to stop one of the few guys we manage to find shopping here. Being a businessman, he immediately gets to the bottom line. “It’s true that depachika are not exactly cheap,” he says, “but here you can get high-quality items for a fairly reasonable price. Either having lunch at an eat-in counter or buying a couple of dishes to add to your dinner at home make you feel like you are doing something special.”. This salaryman (white-collar worker) is about to go back to his office after having had lunch here. “It’s more casual than a restaurant as there is just a small counter and a few chairs,” he says. Enough of men; we decide to approach a pretty lady next. She looks about 40, so she must be at least 45. “I’m married but I’m what people call a career woman,” she says, “I don’t have much time to cook. I always try to do my best, but I must admit that I often rely on these places to put dinner together”. Takashimaya’s PR officer Mio Mayumi explains that more than 70 percent of women in their 40s are working either full-time or part-time, including many married women. “This latter group find themselves in a tough situation as they try to balance their careers with their responsibilities at home,” she says. “In particular, they often don’t have time to cook the traditional labour-intensive Japanese dinner, so they have come to rely on the depachika”. However, married women are not alone. A sizeable number of the female customers are single ladies in their 20s and 30s. We stop one of them while she is about to leave and ask her to show us what she’s bought today. Yasuko is an office worker, lives alone in central Tokyo and when she doesn’t eat out with her friends or coworkers she likes to have dinner at home while watching her favorite TV dramas. Today she bought a variety of fried fish a salad, and a chocolate cake. “For me it’s like going to Disneyland,” she says, “It’s never-ending fun. Every day I can change the menu on my table”.

The young O.L. (“office lady”, referring to a female office worker in a junior role junior) can’t wait to go home, so we let her go. Mio-san explains that people in their mid-20s to mid-30s are the so-called “transadult generation”. “They are fashion-conscious and have quite a lot of disposable income, which they spend at department stores,” she says, “Young women, like the one you have just interviewed, are constantly following the latest trends”. Speaking of trends and fads, one of the things that most women love to do is to hunt for sweet tasting things, and a depachika is arguably the best place to find an endlessly changing line-up of cakes, pastries and puddings. Certain depachika have up to 50 or more shop counters devoted to satisfying the clientele’s sweet cravings, ranging from Japanese sweets to French chocolate. “New items are easy to spot because there is always a long line of people in front of those counters,” Mio-san points out. Next we approach another woman in her late 30s. This one looks like a walking advertisement for Chanel. She has just bought some camembert and is now moving to the next shop counter while the shop assistant at the cheese counter is still bowing profusely, unnoticed by our Chanel lady. “What I really like about shopping in Japan is the customer service,” she says, “and a depachika is where this reaches a level of perfection. I travel abroad every year and have visited many countries but nothing compares to Japan. Look at the way they bow to you and their politeness. And the way they wrap your purchases! That’s the best part”. She explains that it’s all a matter of culture and habit, and everybody takes it for granted. We at Zoom think it’s a little overdone, but Chanel lady promptly disagrees. “I absolutely love it. Every time I come here I feel like a princess!”. Mio-san drags me away and gives me a tour of the premises. She explains how the overall layout has changed in recent years. “In the last few years there has been a lot of renovation in Tokyo’s depachika,” she says, “Shop space for gifts, for example, has been reduced to make way for delicatessens and takeaway meal outlets run by famous restaurants. More and more small kitchens were installed in order to provide the customers with constantly fresh food”. We interrupt our guide because we have spotted a group of women jostling for position around a confectionary shop counter. We ask what all the fuss is about and Mio-san explains they are selling a new cake. “Many customers can’t resist buying new items. They will line up for hours just to get some doughnuts,” she explains, “A few years ago it happened when Krispy Cream opened in Tokyo, and before that with Belgian waffles”. According to Mio-san, some department stores have even developed their own brands to attract shoppers seeking rare, hard-to-find food items. It’s getting late but the number of customers crowding the aisles of the depachika hasn’t decreased at all. If it’s possible, there are even more people than when we arrived. We follow a woman who is hurrying from one shop counter to the next. “I like the fact that department stores stay open until late,” she says, “Being a working woman

I don’t have a chance to shop for groceries during the day, so these depachika are real life-savers. Besides when closing time is approaching, many shops that sell fresh and perishable food slash their prices, so it’s actually very convenient to do my shopping at this time”. Miosan confirms that pushing back the depachika’s closing time by one hour has been a win-win decision. “The customers are obviously happy because they can rush here at the last minute to buy a ready-made dinner or bread for breakfast, and we have seen our sales rise by about 7 percent” she explains. Our mission accomplished, we realize we haven’t eaten all day. So we rush to the sushi area and grab a mouth-watering plateful. Originally priced at 1,500 yen, we are lucky enough to get it for just 800. That’s food paradise on earth!