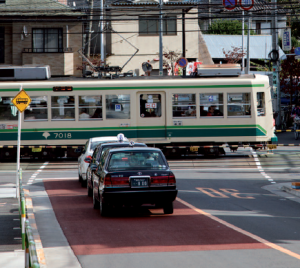 A unique survivor of Tokyo’s old tram network, the Arakawa line has a few beautiful surprises in store for eager visitors.

I’ve always had an obsession with trams. Maybe it’s because I love trains as well and trams look like trains that happen to criss-cross our cities. So I was somewhat disappointed when I moved to Tokyo and I found out that the once extensive tram system had been demolished for good. It had survived both the 1923 Great Kanto Earthquake and the American aerial bombings in 1945, reaching a peak of more than six hundred thousand passengers per day in 1955 but in 1960, with the Olympic Games approaching, the metropolitan government suddenly decided that the clumsy old trams clashed with the image of a new, modern Japan that it wanted to show the world and set out to dismantle the network.

My disappointment partially disappeared when I finally managed to find a line that had survived the slaughter, the Toden Arakawa Line. It is a very peculiar line to be sure, because even though it is labelled a tramway, it actually almost never ventures into the heavy Tokyo traffic, as it uses an independent railway that cuts through the streets only at one point, thus freeing the trams from red lights and traffic jams. Apart from this, the most important thing I noticed the first time I rode on the line was that the 12.2-kilometer 50-minute trip took me through some of the more un-cool and now neglected districts in northern Tokyo. This area is way off the two main beaten tracks of this labyrinthine metropolis – the ultramodern district centres on one side (e.g. Shinjuku, Shibuya) and the fake folkloristic neighbourhoods near the Sumida River on the other (e.g. Asakusa). These two urban extremes are respectively the favourite hunting grounds of the hip young crowd and those (namely tourists coming from abroad or the countryside) who want to have a taste of Old Tokyo. By contrast, the north is somewhere that nobody ever goes unless they happen to live or work there. What I saw on that first ride convinced me to make another trip to the area. But this time I decided to make several stops and follow the tracks on foot to check out what I had only half-seen from the train. Actually following the tracks is by no means an easy thing to do because the tramway often runs very close to the walls of the many houses that crowd the area (I can’t imagine how the people who live there can stand the noise and the vibration). So I had to make frequent detours. However, that wasn’t a problem, because my main goal was to see what was hiding beyond the tracks. In this respect, I wasn’t disappointed. It felt like a sort of time travel, as if I had stepped into an older, long-gone Tokyo.

I kept running into small, family-run factories and tiny little shops, full of dust and strange objects most people don’t even remember how to use. And trees. That’s a peculiarity that sets this area apart in a city that is not very tree-friendly (to give an example, the metropolitan area devoted to parks per capita is only one-twentieth that of Washington D.C., and the absolute area is well under that in Philadelphia and only a bit over Detroit – both of them much smaller cities).
The line starts in Waseda, not far from the famous university campus, and after a few stops reaches Zoshigaya, one of the most fascinating neighbourhoods along the line. On the right side of the tracks you will find the Zoshigaya cemetery. I don’t know about you, but I love cemeteries. I know it may sound creepy but I think many of them are very charming and the ones in Tokyo are among the most beautiful and, hopefully, quiet places you will find in the city. Zoshigaya is no exception. Walking its grass-covered uneven paths, surrounded by trees and the pervasive fragrance of incense, one can easily forget that the huge and ugly Sunshine City high-rise complex sits on the other side of the tracks. If you like hunting for famous people’s tombs by the way, this place is home to writers Natsume Soseki, Nagai Kafu and Lafcadio Hearn, and Prime Minister Hideki Tojo who was executed in 1948 as a war criminal. Many people say that Zoshigaya’s days are numbered and “progress” is coming, but a diminutive old man I met assured me that as long as he and the other elders in the area are around, gentrification will have to wait.

Speaking of senior citizens, all the city’s northern districts seem to be home to a good number of old people. This part of Tokyo has never been too fashionable. It’s considered too traditional and the pace of life is too slow for the younger generations. Besides, it lacks the status to attract those who think that living in the right place is everything. In a sense the tramway mirrors this lack of glamour. Instead of the high-tech subway stations, here you have much simpler affairs: concrete blocks, a wooden bench for three or four people to sit, with no ticket vending machines or ticket gates.

Leaving Zoshigaya, it is better to board the tram, as the next stretch is not that interesting – a grey area of dull buildings and the usual shopping malls. However, after the line intersects the Yamanote Line loop and shoots north towards the outer limits of the city, it is back to the usual old Tokyo feeling. Walking the maze of back streets and alleys that comprise these supposedly unappealing neighbourhoods is a refreshing experience after the usual hustle of the business and entertainment districts.
About halfway from the terminus, the tram reaches Asukayama and finally takes some courage and decides to join the car traffic. This is a pretty busy intersection and the tram has to reduce its speed to a crawl. This is the right time to get off and explore the area, as it is a place of great historical and natural interest. Located on high ground, with streams that spill over waterfalls to feed the Shakujii River, it was subject to largescale tree planting in the 18th century by order of the shogun. Many cherry trees were planted on the hilltops and when they bloomed hanami (flower viewing) parties were given that attracted sophisticates from the city centre some 8km to the south. Some of the trees still remain (even though a panoramic look from the tower on the top of the hill will show you a forest of mostly low, grey buildings) while four of the original seven waterfalls are hidden in the Nanushi no Taki Park just behind the Oji Inari Shinto shrine. This show of endurance is no mean feat, considering that industrialisation destroyed a good part of the natural environment and in turn made the area a target for heavy US wartime bombing.

After some more zigzagging at random I found a Buddhist temple, half hidden behind a group of houses. Its official name is Shojuin, but I learned from a small sign near the entrance that it is also known as Akachan- ji (Babies Temple). Actually, this is not the only example of the genre. Almost every town has a place like this, easily recognisable by the many dolls and toys one can find piled up in front of the altar. Many women who can’t get pregnant or who seek divine protection for their soon-to-be-born child come here and pray. Still many others seek forgiveness after they have had an abortion. In Japan, abortions are relatively easy to perform and neither Shinto nor Buddhism has problems with that. On the other hand, sexual education is nearly non-existent and for many couples, condoms are the only known or readily available means of birth control.
Back on the tram, the final stretch of the line offers other little jewels to the curious urban explorer (e.g. the Arakawa Amusement Park near Arakawa Yuenchimae Station, first opened in 1922). However, being a train otaku I decided instead to make two more stops: one at Kajiwara Station, where next to the tracks is Akemi Seika, a shop that sells cakes in the shape of trams (a real treat for train otaku); and one at Minowabashi Station (the end of the line), where I paid a visit to a coffee shop whose owner is even crazier than me about trams. Besides coffee he also, sells windup toy trams. I heard all kinds of tall and fascinating stories from him and just before I left he whispered in my ear that the Tokyo suburbs are actually home to one more tramway. But that’s another story…