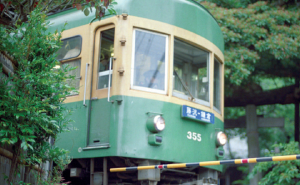 Just an hour away from the capital, Kamakura is so full of charm that you will forget how close you are to a big city.

Leaving Tokyo at this time of the year, with its stifling heat, is rather a good idea. Even more so now, since the accident at the Fukushima Dai-ichi power station means that air conditioning has been reduced to a minimum. So why not leave the capital for another, older, one? I am not thinking of Kyoto, however charming it may be, but rather Kamakura, which became the capital of Minamoto no Yoritomo in 1192, and gave its name to the period from 1192 to 1333. It is situated just an hour away by train from Tôkyö (on the JR Yokosuka line), has a population of 174,000 and offers many advantages to the traveller in search of to something fresh – which is provided by the sea, the woods, and the many religious buildings to be found in the area.

During the twelfth century, in a time of military turbulence, Kamakura became famous for its Zen Buddhism, which explains the presence of over sixty temples in the locality. There are also close to twenty Shinto sanctuaries, so your itinerary will be packed. I advise you to spend at least two or three days there if you also want to take advantage of the sea front at Sagami bay, so loved by the Japanese, with its memorable sunsets. As is customary in Japan, and Kamakura is no exception, the visit starts at the station. If you want to be efficient and make the most of the public transport, get off the train at Kamakura station (Kamakura eki), which is also the end of the Enoden line that runs along the coast. Several buses also leave from that station, and serve the main tourist sites. Nevertheless, if you choose to get there early and you have enough time, it is much nicer to enjoy this city’s treasures by getting off at Kita-Kamakura (Kita-Kamakura eki), the station before Kamakura. From there you can take a pleasant walk towards the architectural and historical locations of the ancient capital.

First stop:
Engaku temple (Engaku-ji), situated just two minutes away from the station. Founded in 1282, as a tribute to the Japanese and Mongolians who died during the two attempted invasions of the archipelago by the Mongolians, this site is surrounded by trees – which makes for a lovely summertime walk. During the spring the cherry blossom is the attraction for many visitors, and in the autumn the maple trees turn all shades of red. The Sanmon gate was the inspiration for The Gate by novelist Natsume Sôseki [translated by Francis Mathy, Peter Owen Ltd edition, 2006], and it is the only ruin that reveals how majestic this site once was. It shelters two national treasures: the Great Bell of 1301 and the Pavilion of Relics (Shariden). You can end your visit to Engaku Temple at Benten-dô teahouse where you can taste some delicious macha (600 yen), while contemplating the view of nature below you. Then, proceed towards Kenchô temple (Kenchô-ji), which is approximately a fifteen-minute walk away. It was the first Zen temple in the country, built in 1253, and the most beautiful compared with the other four in the city. Its Buddha Hall (Butsu -den) and Dragon in the Clouds (Unryû), painted in the 1920s on the ceiling of the public ceremonial hall (Hattô), are both definitely worth a visit. Following this, another ten-minute walk will get you to Tsurugaoka Hachiman-gû. It is Kamakura’s main historical Shinto sanctuary, built in the heart of the town in 1180. This sanctuary offers something quite different from the previous visits, and is a beautiful conclusion to your first day spent in Kamakura. Although the walk under the trees is not too tiring you will soon feel hot and hungry. Now that you are close to Kamakura station you can easily find a place to eat. You can then return to Tôkyô aboard one of the many trains that run on the JR Yokosuka line, or you can extend the enjoyment by taking the famous Enoden line that runs between Kamakura and Fujisawa. The latter is a thirty-minute ride running partly along the beautiful coastline. More like a tram than a train, the Enoden line was opened in 1902. It is the third oldest train line still in use on the archipelago. Many train lovers visit Kamakura to take pictures of the pale yellow and green carriages known throughout the country.

For 580 yen you can get a day ticket that allows you to get on and off the train and take advantage of the many attractions along the line. If you want to continue at this pace then just ten minutes away from Hase station is Kôtoku-in, mainly worth a visit to see the great Buddha statue. It is bronze, weighs 121 tons and stands 13.35 metres high. Inspired by Nara’sTôdai-ji Buddha, Kamakura’s is smaller but recognized as more beautiful. It would be a shame to miss out on this amazing sculpture, just as it would never do not to visit the temple at (Hase-dara) just five minutes away from Kôtoku-in. This beautiful place is worth a long stop so as to take advantage of all its treasures, the most famous being a statue of Kannon, the eleven-headed Goddess of pardon, which is situated in the Kannon-do and provides a viewpoint overlooking Sagami bay. On your right, in the Amida-dô pavilion, you can see the gold statue of Yakuyoke, a protection against evil spirits. The temple is particularly attractive to visit in autumn, when all the leaves change color. In the summer it is the turn of the hydrangeas. They bloom all around Hase’s Temple, in pink, crimson and white, and along the way to Goryô’s temple (Goryô jinja), Jôju-in and Gokuraku’s temple (Gokuraku-ji), from where you can get back on the Enoden line.

From then on forget the temples and sanctuaries and focus on the sea and the outline of Enoshima in the distance. Many Japanese stop at Inamuragasaki station (Inamuragasaki eki) or Kamakura Kôkômae (Kamakura Kôkômae eki). Quite a few films have been shot there, and they are locations from which you can take wonderful pictures at sunset. Young couples enjoy sitting outside one of the many restaurants. Do not expect haute cuisine, however, a beautiful sunset is sometimes worth a good meal.
Outside Shichirigahama station (Shichirigahama eki), between Inamuragasaki and Kamakura Kôkômae, Amalfi della Sera (which sounds and looks more Italian than Japanese) serves delicious Mediterranean food. But it can be hard to get a seat on its famous terrace. You can also continue to Enishima station (Enoshima eki) for a stroll at dusk. Whether you stay for a day or more you always end up forgetting how hot it is in Tôkyô when visiting Kamakura. In addition, you return with beautiful pictures and memories to share with your friends.