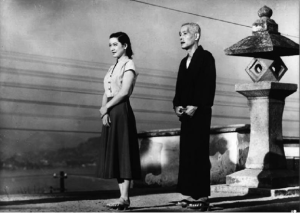 This year is the 60th anniversary of the release of Tokyo Story. Yamada Yoji drew inspiration from this major work.

Directors Yamada Yoji and Watanabe Yutaka (Kinoshita Keisuke’s assistant) came to the Shochiku Studios in Ofuna in 1954, one year after Ozu directed his opus, Tokyo Story there. There were many famous directors there at that time, including Ozu himself as well as, Shibuya Minoru, Oba Hideo, Nakamura Noboru, Kawashima Yuzo, Kobayashi Masaki, and Nomura Yoshitaro. We had a lengthy discussion with the two men, who had been living at the studios in Ofuna during that period. They talked to us about Tokyo Story and Yamada’s new film, Tokyo Kazoku (Tokyo Family), a tribute to Ozu’s most famous work.

Watanabe Yutaka : I’d like to turn to Tokyo Kazoku straight away, in which I could see the “Ofuna style” even though those studios have closed. I don’t know if I’ve already said this but Oba Hideo once said that, “through Yamada Yoji’s amazing talent, we were able to rediscover this tradition”. He was right.
Yamada Yoji : Really, Oba said that? That was kind of him. Well, for this film, I have to admit that Ozu was a good model. (laughs)
W. Y. : Just because you’ve got a good model doesn’t mean that everything’s always going to go well. It’s difficult.

I’m curious, when did you start to think that Ozu’s film making was so good?