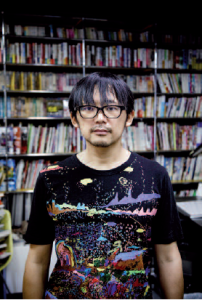 A rising star of the manga world, and the author of I am a Hero, Hanazawa Kengo lets usin on his work and his take on Japanese society.

Hanazawa Kengo already has a few successes to boast of. The latest, I am a Hero, has been published in Big Comic Spirits magazine since 2009. We took advantage of his visit to Brussels for the Made in Asia Festival to interview him about his progress and his latest manga.

Your manga I am a Hero is very popular abroad. It was even part of the official selection at the Angoulême Festival in France. What do you have to say about its popularity?

Hanazawa Kengo : Frankly, I was surprised. It’s quite surprising that a manga with a failed Japanese hero would get such a warm welcome abroad. I feel relieved that there are other people in the world that resemble me, and in whom I inspire sympathy. I’m happy to see that such typically Japanese culture, which is usually quite hard for foreigners to understand, was so well received.

How was I am a Hero born?

H. K. : Usually, when you start a new series, you have meetings with the publisher to determine the layout of the story. For this manga, we decided to include the themes of “fear” and “destruction”. I talked about it with my editor quite a lot, to discover my own fears. When I think about it, I’ve been fearful since I was a child. I never suffered from any particular experience, but I was scared to go to the toilet alone. And this childish fear stayed with me as I grew up. As for “destruction”, this is related to my previous comic strip, Boys on the run. I experienced a very difficult period during which I had a lot of trouble finding new ideas. At that time, while I was commuting between home and my studio, I sometimes wanted to just pack it all in. While I was thinking about a story that could combine with the themes of “fear” and “destruction”, the idea of a zombie character seemed perfect. And there are very few manga in Japan that talk about zombies. On the other hand, there are many zombie movies, such as 28 Days Later, the Army of the Dead, REC, I am a Legend. In fact I am a Hero was inspired by the Army of the Dead.

The zombie doesn’t appear until the eleventh episode, which is quite late. How come?

H. K. : In the pre-publication magazines, the global scenario can usually be imagined after the second or third episode. This time, I wanted to mislead the reader and surprise him. So the zombie appears in the script when the reader was starting to believe that the manga was just about a manga author’s everyday life. The horror film Paranormal Activity inspired that moment. Instead of changing the frame, I thought it more realistic to keep the camera still. In other words, if I had zoomed into a close-up, or had too wide a frame, I think it would have lost a lot of its realism. In a way, it’s a documentary approach that I wanted.

Does Hideo, the mangaka’s assistant and the main character in I am a Hero, resemble you?

H. K. : Yes. When I started this strip I wanted it to stick to reality more than in my previous work. That is why I decided to create a main character that resembles me. His face is mine, although we don’t have the same haircut. If I hadn’t been able to draw, I think I’d have been a failure. I’ve always believed I was useless. I’ve never felt like shooting someone though, because that’s a crime. In Japan, gun law is very strict. It’s quite rare to even get to touch a gun. This manga’s realism doesn’t only concern Hideo. For example, I went to Mount Fuji to smell the scent of rotting bodies [many people commit suicide there]. In fact, I only found bones.

Sometimes, Hideo denies reality and enters an imaginary world. Why?

H. K. : The main character has problems communicating. He has trouble living in the real world and hides away in an imaginary world. When you’re a mangaka, success promotes you to the top of the social pile. On the other hand, when it doesn’t work, you’re at the bottom of the ladder. Because we live in a very unequal society, many mangaka go through a lot of stress. Mangaka assistants carry out their work diligently, but from the outside they often appear slightly suspect because people know very little about what they actually get up to.

Unlike most ordinary Japanese people, these suspicious characters are able to survive crisis situations.

H. K. : When you are part of that group, or when you’re a loser, you can only survive by fleeing reality. And in the event of a crisis, these people are astonishingly strong because they are used to being cold-blooded by fleeing reality. In my case, if attacked by a zombie, I would probably become one after being bitten without fighting it off. I’d prefer to be a zombie because it wouldn’t be as stressful (laughs).

How did you become a mangaka?

H. K. : I didn’t want to do the same thing as others, I didn’t go to a specialized manga school. I did computer science training. When I graduated, I worked for a printing house first, before becoming an assistant to mangaka Uoto Osamu. He is someone who liked precision. When he drew an onigiri, he would really focus on bringing out the texture of the seaweed. I also worked for Yamamoto Hideo for a period of time. It was important for him to endure real life experiences to write his manga. I was very influenced by him, so I always undertake research before starting on my own projects. After my first manga, Ressentiment, I was still an assistant for quite a while. Now I am married, and I have someone there to listen to me, but at the time, like Hideo, it was up to me alone to speak up and to criticize the society around me.

In the beginning, Hideo goes crazy trying to become a hero. And he becomes one, step by step.

H. K. : There’s nothing special about a zombie. In that sense, the zombie only plays a secondary role as such. I only recently realized this. Because the main character is so closely related to me, if I were to think that I wasn’t the main character in my own life, he couldn’t be either.
Will Hideo be the last survivor in this world?

H. K. : I wonder. I don’t know yet, but I have a vague idea of what will happen. In general, in most zombie films it ends without really knowing what they are. I hope to give an answer to that.

In your manga you show Japanese people who are incapable of responding to the appearance of zombies. This a way of criticizing a society that doesn’t comprehend the feeling of crisis and attempting to shock?

H. K. : Hmm. I started the strip before March 2011’s earthquake. It’s something I created from my own imagination. And then reality overtook me. I wonder if I should allow my way of thinking to evolve. Before the earthquake I could evoke scenes of destruction while in a peaceful reality but once that reality was destroyed, perhaps I had to change the way I expressed myself, especially when writing about violent situations. This manga might not have seen the light of day if the earthquake had happened beforehand. The Japanese are not very aware of danger. They don’t know how to react in the face of danger, but that may not be such a bad thing. I became aware of that when seeing how united we all were after the earthquake.

Boys on the Run was adapted for the cinema in 2010 before the TV adaptation in 2012. I am a Hero was nominated for the Great Manga Prize and has been warmly welcomed abroad. As a result of this success, is it hard to continue drawing losers?

H. K. : No. I can’t yet leave the universe of losers. I know that to succeed, I need to develop more confidence. For the time being, I’d feel I was lying if I were to draw myself as a superman. So because I can’t draw lies, I think I’ll continue drawing losers.

Is it hard to meet the deadlines for pre-publication magazines?

H. K. : In general the editor keeps a close eye on what I’m doing when I’m drawing a strip and he deals with everything. So I always meet the deadlines. And sometimes, when I concentrate too hard on what I’m doing, I forget what I’ve drawn the previous week. I spend most of my time in my studio, which is in my house. And when I relax, I like to go out to restaurants with my wife.