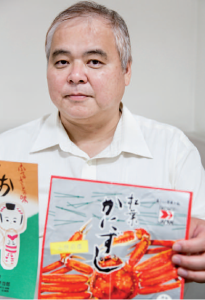 For 40 years this modest high school teacher has been collecting everything to do with station lunchboxes.

Passions can take many different forms and often result in extraordinary collections which testify to a persons love for a particular object. When thinking about Japan, the first things that come to mind are probably related to manga and anime (e.g. figurines and plastic models), but in Mishima, a small town about 120 km south of Tokyo, we find a very different kind of collector. When you meet Uesugi Tsuyoshi, the first things you notice are his chubby face and bulging waistline.
Indeed, this unassuming high school teacher is a different kind of otaku who hides a life-long passion for ekiben behind his quiet appearance. Actually this is not really a secret as Uesugi has a very popular website devoted to all things ekiben, which attracts thousands of hits every day. He has even published two books on the subject.

One of your books is about ekiben wrappers. It features 177 examples dating back to the Meiji Period (1868-1912). They come from all over Japan, and even its pre-war colonies (Korea, Taiwan and Manchuria). I think that’s just a tiny sample of your collection.

Uesugi Tsuyoshi : Yes, right now I have about 10,000. I also collect particular packages, such as pot-like kama, and other ekiben-related stuff.

What do your students think about your passion?

U. T. : They agree with me that life is not only study and work, and that there should be a space for our particular hobbies and interests as well.

I think the ekiben phenomenon is unique to Japan, right?

U. T. : Pretty much so. The only other countries with something similar to our ekiben are Thailand and Korea.

I read somewhere that you eat ekiben every day.

U. T. :Well, some days I do not have one but sometimes I may eat two or three. So you can say that on average I eat about one a day.

Where do you buy them?

U. T. : I usually go on ekiben-hunting train trips about twice a month. Then, of course, I check the ekiben fairs inside department stores. But even here at Mishima Station there are a couple of shops with a good variety, from fish to beef and chicken, so I’m never short of choices.

When did you start collecting ekiben wrappers?

U. T. : About 40 years ago, when I was in junior high and I went to Hokkaido on a school trip. On our way back we stopped at Aomori Station and I bought a Makunouchi Bento whose wrapper featured a beautiful picture of the local night-time Nebuta Festival. Unfortunately we couldn’t stay for the festival, so I decided to keep the wrapping paper instead, as a memento. After that I got in touch with other ekiben enthusiasts through the readers’ column of travel magazines and began to trade wrappers with them. Little by little I began to notice how those beautiful pictures actually carried a lot of information – not only about the food but about that particular area as well. For me this became a way to travel vicariously through ekiben. My interest deepened when an elderly person gave me a wrapper from pre-war Japan. It was as though the wrapping paper gave me a chance to travel not only through space but in time too, and see what old Japan looked like. So I began to seek these rarer wrappers. To cut a long story short, when I graduated from high school I had accumulated more than 200 wrappers and by the time I finished university I had more than 1,000. Now when I look at all these wrappers one after another it’s like viewing a museum display or reading a book of Japanese history. They have become a sort of traveller’s journal.

Where do you find the old wrappers?

Why, in your opinion, are ekiben so popular?

U. T. : Because each one of these small packages contains a whole world. Inside you don’t just find many delicacies, but a particular way of life. Even more than the food, you taste a particular local culture. As soon as you board the train and sit down, you get restless. You can’t help thinking about your freshly purchased ekiben. When shall I unwrap my lunchbox? What will I find inside? Then the train leaves the station and you surrender to its rolling movement, waiting for the perfect time to open that magic box. For the Japanese, our food culture is dear to our hearts. We place great importance on what we eat because eating is so close to the way we live. Indeed, it is part of our traditional culture.

But why keep the wrappers?

U. T. : A lunchbox is something you enjoy while looking at the scenery out of the window or chatting with your fellow travellers. The problem is, when you have finished eating, nothing is left. After a while you even forget how the food tasted. But you want to keep some kind of memory of your trip. That’s why wrapping papers are so important.

Why do you find them so fascinating?

U. T. : It’s the excitement one feels before opening the box. You look at that picture and start fantasizing. For example, the drifting ice featured in the “Okhotsk Bento” reminds you of the freezing sea near Abashiri Station, on Japan’s northernmost island of Hokkaido. “Obento” is another ekiben that you can buy at Nishi-Maizuru Station in Kyoto Prefecture. It features a very detailed picture of Amanohashidate, the thin 3.3 km long sandbar that connects the two opposite sides of Miyazu Bay and is considered one the top three scenic views in Japan. These images amuse you, tickle your fancy and appeal to your inner gourmet. It’s a way to taste something with your heart even before you actually taste the food inside. I think it’s very Japanese, the same way that we put a lot of effort into food’s aesthetic presentation. Because after all, ekiben are not only about filling your stomach. They are a way to enhance your travelling experience.

Do you have a favorite wrapping paper?

U. T. : There are so many but to name just one, “Tai Meshi” is a lunch box you can buy around this area at stations such as Numazu and Shizuoka. It sports a picture of a sea bream vigorously jumping out of the water and perfectly expresses the fish’s vitality and energy.

Has ekiben fever caught up with the rest of your family?

U. T. : My wife has resigned herself to the fact I’m incurable (laughs). On the other hand, I sometimes buy them for the whole family so she doesn’t have to cook. It’s true that most ekiben don’t come cheap, so I have to be careful with the money. As for my children, they love them. Sometimes they join me on my travels, and one of my daughters even said she would like to work for an ekiben company!
Interview by G.S.