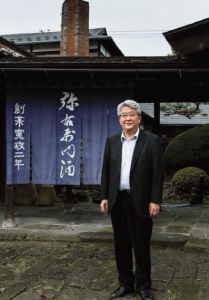 In Kitakata, the Yamatogawa brewery produces a 100% guaranteed alcohol while supporting the region’s producers.

Situated at the extreme northwest of Fukushima, on the border with Yamagata and Niigata, Aizu province is known for the taste of its water, its rice and it’s sake. Although spared by the radioactive winds and rains that followed the nuclear explosions on the 11th of March 2011, Aizu is still a part of the administrative district of Fukushima. Nevertheless, Sato Yauemon, head of the Yamatogawa brewery, decided not to let the calamities deter him, and to pull his company out of the troubles. He is the 9th generation of the Sato family to make use of their jizake brewing know-how in the city of Kitakata. His perseverance and the reputation of his good name has triumphed over all obstacles. The reason for this success is the drastic control of the level of caesium in each barrel of sake. The intoxicating smells when visiting the Yamatogawa brewery where this year’s new sake is prepared are heady. The structure is only twenty years old but the brewing experience applied there is ancestral. “We have been in existence since the French revolution!” says Sato. Founded in 1790, the Yamatogawa domain is about to celebrate the 224th birthday of its Yauemon sake brand. “Before we only had three classes of sake:1st, 2nd and platinum, like air travel,”he says. Now, the range of sake is infinite, from vintage to table sake. It is classified according to the degree the grain has been polished, its period of fermentation and whether or not extra alcohol has been added. Despite these variations, the basic process doesn’t change. Made entirely from their own rice, Yauemon sake is a real local jizake.

Sato Yauemon is a dynamic businessman who travels the world to talk about sake, an infinite source of inspiration for him. “Sake soothes the heart, and gives one strength. During the war, some men would return after having killed, with their hand still gripping their gun. They were the given a glass of sake. It also has disinfectant properties, livens up meals, favours romantic encounters… or ruins them, it depends…,” he laughs. In Japan, sake is sacred. Omiki, the sake of the gods is made with love in shrines and given as an offering during each Shinto celebration. “The four essential elements of everyday life are sake, rice, water and salt,” says Sato. He has two sons who will take over the brand after him, but in the mean time he still leads his company with an iron fist and it has survived many storms. “The seventh generation lived through Kanto’s big earthquake in 1923. My grandfather was a military man and kept a stock of water in barrels under the house. Thanks to that, we were able to restart the production. As long as there is water, anything is possible”. Grandfather Sato was right to be proud, as the reputation of of Kitakata’s water is second to none. As well as its sake, its ramen (noodles in broth) is known throughout the archipelago. “The water is so soft that even instant coffee is good,” he says. Running down from the Ide hills, it irrigates the rice fields that cover this region, including 4,600 kuras, or farms. “We are one of the rare breweries who still grow our own rice,” says Sato proudly. This is 100% guaranteed organic rice grown without any chemical fertilizer. The Yamatogawa brewery owns 25 hectares of rice fields. Not for sale outside Fukushima, this rice is still allowed to be used in the making of sake. “No rice from Fukushima is sold in supermarkets outside the prefecture. Its wasted effort: even if it meets all the regulatory standards, nobody will buy it,” explains his brother Kazunori.

The government has set a threshold of 100 Becquerel per kilo of food. These standards, which didn’t exist before the nuclear accident, control the sale of produce from Fukushima Prefecture. Aizu is 100km away from Fukushima’s power plant, the exact distance that separates it from Sendai in Miyagi Prefecture. Yet rice from Miyagi is sold,” adds the master-brewer at the centre of the family business. Aizu’s local authorities have set up a radioactivity measuring system, but anticipating the influx of products to be regulated, the producers set up their own measuring unit attached to the farmer’s union. “Two years ago, control samples were taken from plots of land, but it was too random. At that time, nobody could ensure that 100% of the produce didn’t exceed 100 bq/kg”. Now, Yamatogawa controls its production at every step of the process, sack by sack, barrel by barrel. “First we measure the harvested rice, then when it’s polished, then the water, then the sake,” assures Kazunori. “The results are between 0 and 25 bq/kg; the equipment doesn’t measure above 25 Becquerel. It is also possible for consumers to check the results with a barcode on the label” he explains, adding that. “We sell throughout Japan, including 40% to individuals, and abroad”. Despite the region’s rice being taken off the market, sales in sake haven’t diminished drastically. “It is strange, because it’s the same rice! But I think it can be explained by the fact that rice alcohol is considered to be less “dangerous”, and also because children don’t drink it”. It will take a long time before the mental block against buying produce from Fukushima disappears but the disaster had positive repercussions as well, by forcing innovation in new ecological fields. Yamatogawa created the Aizu Electricity Company to promote solar energy in the region. It also encouraged other producers throughout the prefecture by introducing a new range of sakes produced from regional fruit, made to the same control standards. Under the large wooden vaults of the old brewery, guests stroll around in a celebration of the god Ebisuko. This beautiful structure dating back to the Edo period was transformed into a tasting cellar and a museum to house a collection of private art belonging to the Sato family. The best sakes are ranged the length of a long corridor. Amongst them is a particularly fine daiginjo class brew, with a polished grain content of 50 to 65%, that has won its third gold medal in a row at this season’s sake competition, organized by the National Research Institute for Brewing. The star of the show though, is without doubt Tadatona, a sake that is fermented and kept in the cellar for 30 years. It is the jewel in the crown of the Yauemon catalogue, costing 30,000 yen [£173], which is three times more than daiginjo. In the reception room, Sato Yauemon welcomes his guests, producers, farmers, bankers and sponsors, who chat happily under the eyes of Ebisuko. “Ebisuko is a god who returns once a year to promote sales. In order to welcome him, we leave the head of a sea bream on the altar, a black radish for longevity, and sake of course,” he explains. On the tables is arrayed the new collection of this season’s sake, as well as the new range of original peach and yogurt liqueurs. “Aizu was lucky not to have been contaminated, but that wasn’t the case for everyone. For example, peach producers in the centre of Fukushima were badly hit, but tests showed that when distilled, peaches lose their caesium content. So, in conjunction with them, I decided to create a peach sake”. Born directly out of the consequences of the nuclear accident, the ‘Peach’s Teardrop’, a junmai sake without alcohol, has a bitter-sweet taste. Sato Yauemon has also produced a junmai mixed with fresh yogurt to help milk producers, a liqueur that has proved amazingly popular with women. “After the disaster, I thought everything was over,” he admits, “but challenges are part of life. There is nothing that cannot be overcome as long as you keep faith, because it’s this trust that is transmitted to the consumer”. After the guests have left, Sato and all his team gather in the tatami room for a traditional ‘uchiage’, to celebrate Japan’s achievements at work. A guitarist wearing dark glasses plays Spanish music that rises to the arches through the cigarette smoke. The atmosphere is both happy and dreamlike. All the guests have gone home with two bottles of this season’s sake that will also be used to celebrate New Year. An employee abruptly surprises the crowd with a bottle of daiginjo. “It’s the only sake that isn’t sold, and it can only be drunk in situ,” he jokes. It has an unforgettable taste and is one of those moments that the Japanese call a “taste of the ephemeral”.