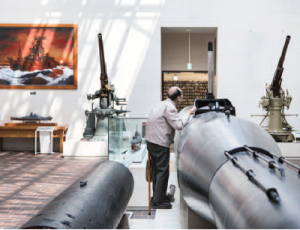 In Tokyo’s Yasukuni Shrine, the Yushukan Museum reveals its own version of the Second World War.

Many countries try to arouse their national pride through their military cemeteries and museums, but when it comes to glorifying an aggressive past, even to the detriment of historical truth, few places do it as blatantly and unashamedly as the Yasukuni Shrine/Yushukan complex in central Tokyo. At first sight it looks like a public park, complete with cherry trees and stands selling sweets featuring the portrait of the current Prime Minister. Office workers, students and couples, both young and old, stroll around the peaceful grounds, sometimes stopping in front of the shrine’s main hall – elegantly draped in a white banner sporting the Imperial family crest, the chrysanthemum – long enough to say a little prayer. The Yushukan, with its white façade and simple oriental design, stands to the right of the main hall. On this particular day, a group of very old men is huddled together in front of it for a memorial photo. Judging from their age, they all must be war veterans. Established in 1882, this military museum belongs to the shrine itself – a fitting match considering the millions of people worldwide who have died in countless crusades and holy wars through the centuries. Before entering the building, we stop to admire three monuments: a mother with three children, a kamikaze pilot and a tribute to the late Radhabinod Pal, a jurist who represented India at the 1946 Tokyo War Crimes Tribunal and gained the nationalists’ eternal gratitude when he stated that none of the defendants were guilty because the idea of a one-sided trial was fundamentally unfair. Pal is one of a handful of foreigners whom Japan’s nationalists – including Prime Minister Shinzo Abe – like to parade for supposedly acknowledging the country’s past innocence and good faith. Alas they all conveniently forget that Pal had actually condemned the Japanese war-time conduct as “devilish and fiendish”, and said that “the evidence is still overwhelming that atrocities were perpetrated,” including for the Nanking Massacre. This “creative” approach to historical documentation can be found again in the entrance hall where, between a Zero fighter plane and a couple of big guns, they have managed to squeeze a steam locomotive that was used on the infamous Thai- Burma Railway, also known as the Death Railway.

According to the Japanese-language-only description written on the plaque, the Japanese engineers succeeded where the British Army had failed, by Jérémie Souteyrat for Zoom Japan building 415 kilometres of railroad in record time in spite of the rugged terrain and the extreme tropical heat – thanks to the 180,000 Asian civilian labourers and 60,000 Allied prisoners of war (POWs) who were forced to work on the project. However the description fails to mention that around 90,000 those Asians and 12,399 of the Allied POWs died in the process due to maltreatment, sickness and starvation. On the other hand, the translated portion of the text only mentions that in the late ‘70s members of the Japanese railroad squadron – those hopeless romantics – contributed funds and bought the locomotive back before donating it to the museum. Next to the guns, the museum shop sells stickers, postcards and candy boxes, all of them sporting Japanese Navy flags. Among the books on sale there are two by former Taiwanese President Lee Teng-hui, another of Japan’s excellent foreign friends, who in the past has often defended Tokyo’s foreign policy. On the second floor, the usual array of weapons, uniforms and flags is on display, but the real treat is a documentary which glorifies the Imperial Army’s war-time exploits as simple acts of selfdefence. Ironically, it is titled “Watashitachi ha wasurenai” (We Don’t Forget), even though, once again, they have chosen not to include all those events that stand in the way of their nationalistic ideology. The second floor is also the best vantage point from which to have a look at other large exhibits that are displayed downstairs, among them are: a bomber plane, a tank and – my absolute favourite – a Kaiten torpedo. Developed towards the end of WWII and modelled on the Italian maiali (manned torpedoes), the Kaiten stood out because of one unique feature: the pilot was locked inside and could not escape. For some reason, the Japanese have always been fond of suicide missions, as demonstrated not only by these torpedoes and the even more famous kamikaze planes, but also by the Shin’yo suicide boats and the Fukuryu suicide divers (often referred to as human mines). One cannot but despair of all those young lives sacrificed to a lost cause. As if to emphasize this sense of wastefulness, the last few rooms display thousands of photo portraits of dead Japanese soldiers, whose spirits are now preserved in the shrine. In 1985 incumbent Prime Minister Nakasone Yasuhiro stated that places like Yasukuni and the Yushukan were necessary to inspire patriotic feelings in the Japanese people and convey the message that dying for one’s country was an act worthy of national honour. “Otherwise,” he added, “who is going to give their life for the country?”. Let us hope future generations will not fall into this trap again.