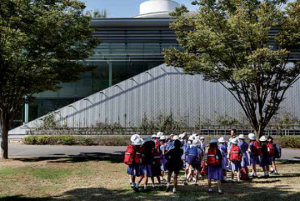 Vulnerable to the whims of nature, Japanese people learn to prepare for the worst through fun and games.

Living in Japan is like sitting on a ticking time-bomb that could go off at any moment. Not only is this country one of the most earthquake-prone places in the world, we also have tsunamis, floods, active volcanoes and a typhoon season in which fierce storms wreak havoc across the islands every year. Most of us have filed this fact somewhere in a dark corner of our minds and try not to think too much about it, but the fact remains that a strong earthquake can strike at any time, whether we are walking in the street, riding on a train or sleeping in our homes. How we react in those first few seconds can save our life. Luckily for people who live in or around Tokyo, there are plenty of places where we can learn everything we need about how to deal with a natural disaster. And this being Tokyo, we can actually have some fun in the process. Tokyo has five main “disaster prevention centres” but if you only have time to visit one, there is no better way to prepare than spending a few hours at the Honjo Life Safety Learning Centre. Strategically placed not far from the Tokyo Sky Tree (so you can even plan a whole day out in that area), this centre is the largest and most modern of its type in the capital.

Two more can be found in Ikebukuro and Tachikawa, but this mammoth building is the best of the three. It houses exhibitions, a well-stocked library and other amenities, but the main reason why most people visit it is to take a two-hour course in which you can watch a 3-D “earthquake movie”, experience a Magnitude 7 earthquake, escape from a smoke maze (replicating an apartment on fire), practise how to extinguish a fire and brave a storm. You can think about it as a kind of disaster-themed amusement park, and there are always many families among the visitors. The tour starts from the Disaster Prevention Theatre located on the 4th floor. Here you put on 3-D glasses and watch an instructional film on what to do when an earthquake strikes. The film was clearly shot a couple of decades ago but looks very realistic and is genuinely scary. It reminded me of one of those cheesy disaster movies from the ‘70s. Next you are taught what to do in the case of a fire and enter the smoke maze section, an apartment- like environment where you have to find the exit while moving in a crouched position in order to avoid inhaling the smoke. Then, once you have successfully found your way out, they give you an extinguisher and teach you how to use it by aiming at a screen showing a room on fire to simulate putting out the flames. The place that most people can’t wait to see is the earthquake simulation room – or at least it was before the disasters of March 2011. Your guide decides how much to make the machine shake depending, for instance, on the age of the visitors, but if you are a healthy and brave adult he is likely to set it all the way up to level 7. If you need to clear your head after all the rocking and rolling, there’s nothing better than a good shower, so you are next invited into the rainstorm simulation section – but not until after putting on heavy hooded raincoats and boots. Visitors are guided through every stage by an instructor and everything is safe, even for children.

Everything feels authentic and gives you a good idea of the real thing. Usually all the explanations and instructions are only in Japanese, but the staff is reasonably bilingual and English info is also available. In any case, you can enjoy the experience by just following what other people are doing. Those of you who want to experience more scary scenarios are advised to head to the Tokyo Rinkai Disaster Prevention Park. On the second floor, visitors can find a large amount of bilingual information, can compare emergency equipment from around the world and even watch a couple of videos, such as a “Mega Quake” documentary and a specially edited version of the animation “Tokyo Magnitude 8.0” (you can also find this one on You Tube). The real “fun”, though, awaits you at the “72 Hours” simulation zone on the first floor, where you are handed a multilingual Nintendo DS game console and are guided around an imaginary earthquake- devastated Tokyo. Your console directs you to different places and you score points by answering survival questions. The aim of the “game” is to see how well you can survive the first three crucial days following a disaster, i.e. before organized rescue efforts get underway. “72 Hours” is very well done and its only fault is that it is over too soon. Just be warned that smaller children could find the dark and noisy environment a little overwhelming.