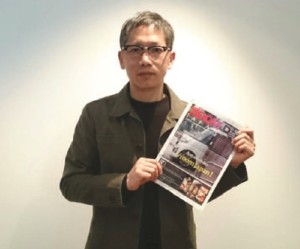 This month Zoom Japan met with film director Yaguchi Shinobu to talk about his latest project, a film about more than just lumberjacks!

Please could you tell us what led to you making the film Wood Job?

YAGUCHI Shinobu: Up until now I have only worked on original projects, but it is not the case that I did not want to try adaptations too. I have always said to people that if there is a novel or comic series that would make an interesting film project then to let me know about it, and lots of people have made recommendations to me along those lines. However, I had never encountered a work that I really felt I wanted to adapt for the big screen until one came up quite unexpectedly, and that was the novel “Kamusari NaaNaa Yobanashi” (Lit: Tales of lazy nights in Kamusari) by Miura Shiwon. I was handed the book by the film’s producer, who said to me “You will probably not go for this one either, but if you say you will read it then give it a look”. So I decided to give it a go and it turned out to be an extremely interesting novel. I read it all and got back to him to say I wanted to do the film all on the same day.

And what were the reasons that you were able to visualise the novel as a film?

Y. S.: Ultimately I could see a very easy to understand image in the world of forestry that is completely unknown to most people, and in how a happy go lucky man from the city with a similar lack of knowledge would experience it. In addition to that, one other very important thing was the traditional festival. One such traditional Japanese festival appears in the novel and the climax of the whole story sees the protagonist having to rush through it and break out the other side like a right of passage. I felt that if I could make a solid depiction of the forestry industry and also show the festival in an honest way then it would build an amazing movie.

And where is the location the film is set?

Y. S.: The setting for the story in the original novel is actually a real village called Misugi in Mie prefecture. The name “Kamusari village” is fictional, but the author Miura Shiwon’s grandfather actually worked in forestry in that village. He went to Misugi to research for writing the novel and so we made that same place the set for the cinematic adaptation too. So you will be able to see many of the same vistas in the film if you go to Misugi. The village festival itself is fictional
though.

What do you think should be done to make more people interested in forestry and get that message across?

Y. S.: I think that this film might be the best thing actually, although I had no intention at all of making Wood Job in order to get people to respect the forestry industry. Almost everyone knows that there are people who work in forestry but the vast majority of Japanese people, myself included, have no idea what that world is actually like. So I wanted to let them experience this amazing world and the jobs in it, with both awe and humour, through the eyes of the protagonist Yuki.

What and where do you get motivation for making films from?

Y. S.: One of the things I really focus on is the idea that the film should be something that I would want to watch myself after paying my own money and sitting in the seat at a cinema. I mean its 1800 yen! (£9.70) Seeing films at the cinema in Japan is really expensive, so I want my audiences to feel that they had the most enjoyable time possible after paying that 1800 yen and losing two hours of their own time. That is the kind of films that I want to make.

What kind of audience would you want to go and see Wood Job?

Y. S.: I guess that it has to be younger people I would want as the main audience; people who are around the same age as the protagonist Yuki, such as students or those who recently were students, or people who are tired after work. I think it would be great if I could cheer them up and give the message that life can be hard but that can’t we also find joy in things as well?

Last year the British daily newspaper “The Guardian” rated Wood Job as one of the worst films at the 2014 Cannes Film Festival. What do you think of film critics like that?

Y. S.: That is a very easy to understand reaction. In the film we see a group of Yuki’s former friends from the city who have formed a group called the “Slow Circle”. From their perspective, the countryside in Japan is a mysterious place from another time, filled with a quaint oriental atmosphere rooted in animism. And so they come to visit the area where Yuki now works on a casual jaunt, expecting to see just that. I think that the perspectives of these characters are perhaps not too dissimilar to those of the people at Cannes. When they actually get to the village it has none of the things they were expecting and instead they see rough, bad-mouthed men and lewd, violent types at work. So the people with those kinds of expectations are surprised and think “Hang on, is this the kind of place Japan is? It is very different to what I thought”. Because of this the visitors are driven out of town and I think the reaction at Cannes may be a similar thing. It could be that kind of feeling of disappointment at seeing things that are wildly different to what you had thought when told that the reality of Japan is actually quite a different place. So I think it is similar to the reactions of those characters when they are kicked out of the village.

What films and directors do you think have influenced you, either from Japan or abroad?

Y. S.: There aren’t any really. When I was small I got into cinema starting with big Hollywood movies, things like Indiana Jones and Towering Inferno. When I went to the cinema it was a thrilling, voyeuristic kind of enjoyment for me, similar perhaps to the old circus curiosity shows, where I could come into contact with amazing, outlandish situations. However, those kinds of films were always nothing but simple entertainment and had no meaning for me beyond that. I think that this perhaps has something in common with the kinds of films I make and want to make.

Please could you tell us about any enlightening or amusing episodes relating to your film “Swing Girls”?

Y. S.: If most people were trying to make a film like that which focussed on musical performances then they would usually do so by getting actors who could already perform or alternatively just dub the singing over the cast that they wanted, but my approach was slightly different. I got together a group of relatively unknown actresses who were not popular and managed to fix down the production schedule very early to allow them time to train and practice intensely in order to be able to perform themselves in the final filming. So the actual cast is performing for real in the finished footage and although they are not highly polished and may be a bit off, I think that makes it a very interesting and appealing performance because of the reality in it and the joy it shows, and thus links to the overall appeal of the film. In the year between completing the film and its theatrical release, the Swing Girls cast went on a performance tour and the production staff was so jealous of that they actually formed a Jazz band to perform together with them. I still play the tenor saxophone at home from time to time!

What is your impression about the youth of Japan today?

Y. S.: I think that the protagonist in the film, Hirano Yuki, is a good representative for young people in Japan today, who do not have big thoughts about their future. It is probably the same the world over, but because it is so normal for them to get their information from the internet, they do not realise how narrow their actual worlds are and believe that they understand everything already. But when they are disabused of that, what kind of situations do they find themselves in? I think that Yuki in Wood Job shows this in a very clear and easy to understand way.

Please could you give us a message for all the readers of Zoom Japan out there?

Y. S.: Wood Job has quite a comical tone to it but this kind of scenario was seen as very natural in Japan. It does not deliberately try to make things too cartoony, but audiences naturally accepted the premise of a young man from the city going to the countryside and getting into these kinds of situations. So I would hope that people can enjoy watching the film and not take it as a particularly special story set in a very special world, just seeing that Japan has its big cities but it also has rural areas too.