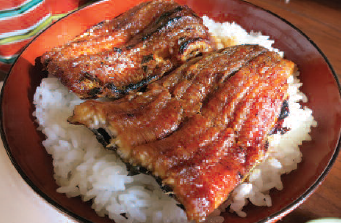 Midsummer day of the ox

July: “For today is the midsummer day of the ox!”

The beginning of July marks the changing of the seasons, and in particular the holding of the Tanabata festival, one of the five major traditional festival days in Japan. On Tanabata people will write their hopes and dreams on a small strips of paper and then tie these to bamboo in the hope that they will be granted. Tanabata has its own associated culinary delicacies, but when most Japanese people think of traditional foods for July, the first thing they will bring to mind are the eel dishes eaten at the end of the month, on the day known as “doyou no ushi no hi”, or the “Midsummer day of the ox”.
Eel is a fish that is intimately connected to Japanese food culture, and there is even archaeological evidence that it has been eaten on the island since the Stone Age. We have no idea how the people back then would have prepared it of course, but today the most common method of cooking eel involves broiling it in a soy based sauce. This recipe is known as “kaba yaki” and sees the eel first cut lengthways in two and all the bones removed before it is skewered, coated in a thick sauce and broiled, creating a mouthwatering aroma that sends the appetite racing. The custom of eating broiled eel on the midsummer day of the ox dates from the Edo period (1603-1868). It started when a renowned scholar of the time called Hiraga Gennai met an eel seller who was distressed at the downturn in his business during the summer and wrote the catchphrase “For today is the midsummer day of the ox”! for him. The slogan was a big hit and the eel flew off the shelves, starting this trend that has continued ever since. It is undeniable that the vitamin rich meat of the eel is effective in staving off the predations of Japan’s brutal summer heat, but the season for eel is actually late autumn to early winter, so it is often said that July is the time when their flavor is at its poorest. Personally I love eel, but recently the numbers of fry used in farming them have been depleted through overfishing, and it is even feared that they may be in danger of extinction. I sincerely hope that a way can be found to protect both fine culinary traditions and an environment that supports an abundance of species.