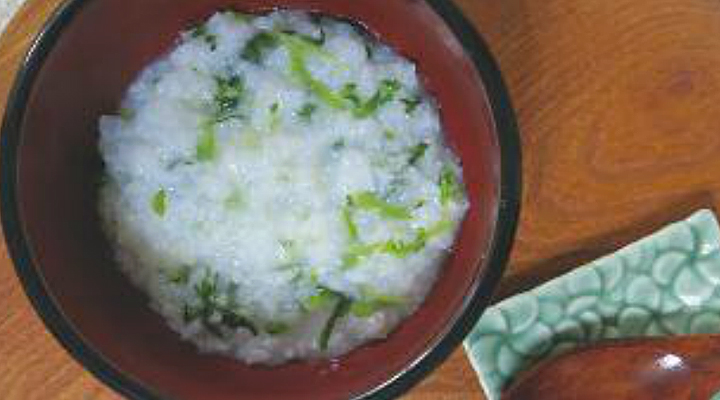 The Japanese round off the excesses of the New Year period with seven seasonal herbs, a tradition dating back over 700 years. Over the last twelve months we have run features introducing the five major seasonal festivals of Japan, traditional celebrations to mark the changing of the seasons and pray for health and safety known as the gosekku. This month we feature the very first of the years festivals; jinjitsu no sekku or the “day of mankind”. This celebration is held on the 7th of January and marks the final day of the traditional New Year period. The customary food eaten on this day is known as nanakusagayu (Lit: seven herb rice porridge), which, as the name suggests, is a warm rice porridge (kayu) containing seven varieties of green herb.

There is a waka poem dating back to the Muromachi period (1333 to 1573) that sings of the traditional ingredients as being Java water dropwort, shepherd’s purse, Jersey cudweed, henbit deadnettle, turnip, giant white radish and common chickweed. It is said that by eating these seven plants that are at their most vital around this time of year, one borrows that vitality from the natural world and will be able to get through the coming year in good health. The truth behind this is that the seven herbs contain a bounty of vitamin C, a nutrient which people often miss out on during the winter months. On top of that, the act of the whole family going out to pick the herbs and then gathering around the chopping board to slice them together while singing counting songs was an important opportunity for family communication and bonding. In the modern day, green vegetables can be easily acquired all year round and people do not have to pick the herbs or make the nanakusagayu themselves. Even so, this simple meal is much loved by the Japanese as it provides a welcome break for tired stomachs pushed to the limit by the rich feasting of the New Year period.