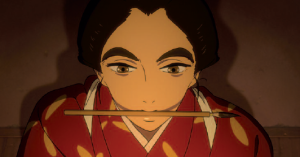 The work of O-Ei, the main character in Miss Hokusai, remains little known. We investigated in order to tell you more.

So who exactly was Katsushika O-Ei, also known as Katsushika Oi, the star of the film Miss Hokusai and the famous Edo period manga Sarusuberi upon which it was based? The main events of her life are known, but light could still be shed on many of the details. She was the daughter of the famous Katsushika Hokusai (1760-1849), and was the only one among his five children to inherit her father’s talent and to choose to follow in his footsteps. The date of her birth and her death are unknown, but written evidence proves that she worked alongside her father and took care of him until he passed away. She then gave drawing and painting lessons to earn a living. O-Ei was clearly very close to her father and resembled him in her willful personality, her passion for drawing and her lack of interest in household tasks. She wasn’t very beautiful and her father even nicknamed her “Ago”, meaning “chin”, because of her angular chin. She didn’t really care about her looks, but it is said that she always kept her hair perfect as her one concession towards vanity. Hokusai would say that O-Ei was better at painting female beauties was than he was, and many academics agree that she helped her father with several of his works. Her signature doesn’t appear on them, without doubt because Hokusai’s famous name allowed them to get higher prices for the paintings, so we don’t know the exact extent of her productivity. Only a dozen paintings in the world are listed as hers, but the Ota Museum has one of the most interesting ones: Yoshiwara Koushi saki no zu – Through the bars of Yoshiwara. Yoshiwara, a pleasure quarter in the capital city of Edo, was created in 1617 and destroyed in a huge fire in 1657. Later in the same year, it was rebuilt further away from the city centre and re-named Shin-Yoshiwara (new Yoshiwara). Yoshiwara was surrounded by a ditch and encircled by a palisade.

There was just one door, through which the courtesans could only leave if some rich man bought them. They were sold by their families, locked away in the city of pleasure at a very young age, and received an extensive education. A printed guide to the entertainments of Yoshiwara was on sale, describing every house and listing the name and the rank of the courtesans who worked there. Yoshiwara was considered a very sophisticated place and had very strict codes of conduct that all the clients, from the poorest to the richest, were required to respect. The luxurious fineries of the courtesans are so beautifully represented in paintings and etchings that one can sometimes forget the harsh reality of these young women’s lives. Those who became ill, or who didn’t have much success with the best customers, were sent to lower quality pleasure houses where they died young and miserable. O-Ei, like her father and many other painters, was interested in Western art, and there were many European engravings in circulation around the nation at the time. Hokusai studied Western perspective, which he illustrated in several pages of a famous study (a set of 15 sketchbooks relating to numerous topics that were published from 1814 onwards, aimed at his students, or anyone else wanting to learn how to draw). He was also interested in shadows, which he reproduced in several etchings – as did O-Ei. O-Ei’s famous Yoshiwara painting is a fantastic scene full of light and shadow. She plays with the shadows of the customers, simple silhouettes in the foreground, and those of the courtesans sitting in a huge well-lit room. At the back of the room are the oiran, the highest-ranking courtesans, and around the sides are the younger, lower- ranking women. The entrance is on the right-hand side. A courtesan preceded by a young apprentice, known as a kamuro, appears to be returning from her official walk, to attract potential customers in the main street of Yoshiwara. This painting by O-Ei is different from her other works on the same subject. She doesn’t focus on a particular courtesan’s beauty and the lit-up faces are all stereotypical. She doesn’t paint the interior of the room where customers, geishas and courtesans are all enjoying themselves, and instead paints the young women through the bars. And although the customers’ faces are in darkness, it is easy to imagine their lust as she attempts to reproduce Yoshiwara’s distinctive atmosphere. O-Ei is not just a painter, she is also a woman, and despite Yoshiwara being a place that people would visit freely without risking disgrace, she couldn’t have helped but feel sorry for these courtesans under lock and key. This painting isn’t signed, but ideograms of O-Ei’s name are concealed in the lanterns. This remarkable painting of and light and shadow, with both soft and shimmering colours, was reproduced by Sugiura Hinako in her manga Sarusberi.