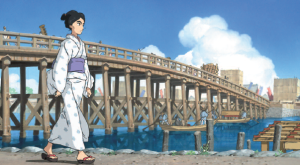 After winning the Jury award at the annecy Festival, Hara Keiichi’s latest film is now on cinematic release in Britain. In this enchanting film we meet the charismatic Katsushika O-Ei, the daughter of master print maker Hokusai, whose work symbolizes the wealthy Edo period.

His new film has been long awaited. After five years of absence from the world of animation, Hara Keiichi is back with Miss Hokusai (based on the manga Sarusuberi by Sugiura Hinako), a powerful work that he talked to Zoom Japan about.

How did you come to work on Miss Hokusai?

Hara Keiichi: I have been a fan of Sugiura Hinako’s works for years. One day Ishikawa Mitsuhisa, the CEO of Production I. G, suggested I should direct this film version of her famous manga. That’s how it all started.

In 2013 you directed the live-action film Hajimari no michi. Were you tempted to direct Miss Hokusai in the same way or was it Production I.G’s decision to make it as an animation?

H. K.: Because the offer came from Production I. G, which happens to be an animation studio, I couldn’t imagine myself directing it as a live-action film. Besides, I thought animation was more appropriate for this story.

How long did the project take?

H. K.: (laughs) In fact, just before they offered Miss Hosukai to me, I had already agreed to direct another live-action film. It took me a few months to finish that project before I could work on the proposal from Production I.G..

Sugiura Hinako’s original work, from which Miss Hokusai is adapted, is made up of several stories based on different characters from the Edo period, but you chose to focus on O-Ei and O-Nao in particular. Why was that?

H. K.: Of all the episodes, I thought the chapter relating to these two sisters was the most dramatic. That’s why I decided it would be the main storyline. Once I had made up my mind about that, I was able to develop the rest of the story.

Were you the one who made that choice?

Did you have any trouble developing this episode?

H. K. : (laughs) The main problem was how deeply attached I am to this masterpiece. To choose just one episode was very difficult. Of course, to make the film I had to make that choice, but as I loved the whole of this manga, it really hurt to reject some of the episodes, especially as many of them are quite extraordinary.

So would you like to direct another film adapted from the same manga?

O-Ei is a fascinating character and as a female protagonist is a first for you and somewhat of a contrast to the main characters in the other films you’ve made, such as Summer Days With Coo or Colorful. What led you to work on a female character?

H. K.: My mind-set during the making of this film was exactly the same as in my previous work, which centred on male characters, that’s true. Nevertheless, as this project unfolded I thought a lot about the character of O-Ei, a 23 year old single working woman. I thought about the female audience and it made me want to attract the attention of an audience that was like O-Ei. Nowadays in Japan there are many women who resemble her.

During the preparation and production of this film, did you meet any young women like O-Ei who influenced the character’s behaviour?

H. K.: I didn’t really make an effort to meet any, but I was surrounded by quite a few women during the making of the film. There was the producer, the screenwriter, the composer and also several animators. So I can say that this film was the result of the input of many women.

What examples can you give us of this input?

H. K.: Several animators suggested actions and approaches that I hadn’t thought of. And the producer of Miss Hokusai is a woman, too, so she took great care to ensure the smooth running of the project. That greatly helped the film making.

The credits include many well-known figures in Japanese animation. How were you able to bring them all together?

H. K.: That’s thanks to Matsushita Keiko, one of Production I. G’s producers. Without her help we could not have brought them together.

H. K.:During the first meeting, there’s always is a little tension, as everybody is rather nervous. But the team’s first results were so perfect that I had nothing to say. Working together was very easy.

You relied on Inoue Toshiyuki for the animation?

H. K.: Once again, it was Matsushita Keiko who suggested him. It was the first time I worked with him, and I was taken aback by how talented he is. Whatever he drew, it was always perfect.

To come back to the main character in Miss Hokusai, why did you give O-Ei such thick eyebrows?

H. K.: (laughs) I wanted a way to express her strong will and her inner strength. I needed a physical trait, so I chose her eyebrows.

The Japanese voices in Miss Hokusai are perfect. How did you choose them?

H. K.: I was really the one who decided on the voices. Firstly I thought of the actress for O-Ei’s voice. Then for the others, I made suggestions that were all accepted. The actors took to their parts wholeheartedly, so the result is great.

H. K. : (laughs) It was another producer, Mrs Nishikawa, who suggested Kora Kengo. She knew that the actor really liked Crayon Shinchan, which I directed. That’s why she thought of him.

Why did you choose rock music for the soundtrack?

H. K.: Because O-Ei is Rock’n’Roll! (he laughs) And Sugiura Hinako, the author, listened to a lot of Rock’n’Roll when she wrote the manga.

I was wondering whether you were influenced by Sofia Coppola’s Marie-antoinette – that had a very rock’n’roll soundtrack.

And how did you choose Sheena ringo for the theme song?

H. K.: The two producers made that suggestion. Sugiura Hinako was a fan of Sheena Ringo. I am extremely happy with their choice, because she’s one of those rare Japanese rock stars who expresses a genuine awareness of her Japanese origins. So that suits the film very well.

H. K. : (laughs) Indeed. She does have a strong personality.

Before undertaking this project, were you interested in the Edo period?

H. K.: Yes. And in general I am more interested in the past than in the future. As for the Edo era, most films and novels relating to it describe the life of samurai. Sugiura Hinako’s work completely changed that perception because she mainly focused on the little people, on their daily lives that were ordinary and peaceful. It is thanks to her work that I was able to discover an aspect of the Edo period that had often been neglected. That’s how I became a fan of her work. The men and women she portrays seem somewhat lazy to us nowadays, but I find their lives extraordinary and full of charm.

The family that you describe in Miss Hokusai very much resembles a contemporary family.

H. K.: Yes, indeed. There are many common traits between the Hokusai family and a contemporary family. But I think they lived in greater proximity to one another during the Edo period. Everybody slept together in the same room. Nevertheless, Hokusai and his daughter have quite a particular relationship. It’s not an ordinary father- daughter relationship because, as artists, there was a rivalry between them, and it was also a master-pupil relationship. Several scenes highlight that rivalry. 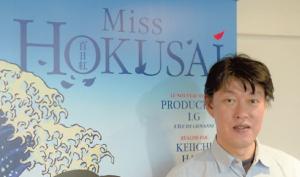 The mother-daughter relationship is also interesting. O-Ei is a modern, independent woman but her mother is the archetype of a submissive woman.

H. K.:Yes, but during the Edo era, conditions for women were very different. They had more freedom. It’s something that’s not well-known, but the film reflects this reality. At that time there were many single men in Edo, because there were fewer women than men. As a consequence, they were treasured and well-treated by the men. They had the privilege of choice. That’s why it’s said they were proud and had great strength of character – perhaps a bit like Parisian women (he laughs).

You rather quickly tackle the subject of sexuality, notably through the character of O-Ei.

H. K. : In the film O-Ei visits a brothel, but I think that this was rather naive of her. She goes because people like the work of Zenjiro and his erotic paintings, despite her thinking that he’s less gifted than she is. She gets angry and thinks that she might be inferior to him because she doesn’t have any experience with men. That’s why she goes to the brothel. But in the film, it’s deliberately not made very clear and I don’t show what takes place. I don’t think anything really happens between her and the boy with whom she spends the night. When she leaves the next day she definitely regrets what she’s done, but this impulsive behaviour fits her character. I think Sugiura Hinako wrote that episode to underline the young woman’s personality, just as she insists on the fact that she loves to watch fires, which is characteristic of her impulsiveness.

Your film is like a bridge between Japan past and present – one only has to look at the poster with the image of the Tokyo Sky Tree.

H. K.: I think the past and the present are strongly linked. I’m very interested in the fact that most Japanese people will soon come across someone from the Edo period when researching their family trees. It isn’t a fictional period, it is a time that really existed. I remember what Sugiura Hinako said to describe this period. She said that it was “beautiful, gentle and wild”. I think that’s a very good description. I’d like the film to inspire that state of mind in the current corrupt and obscene climate.

No22 [Train] The man who loved trains

No13 [Interview] Hanazawa, an unintentional hero

No46 [Encounter] The amazing Kakuta Mitsuyo