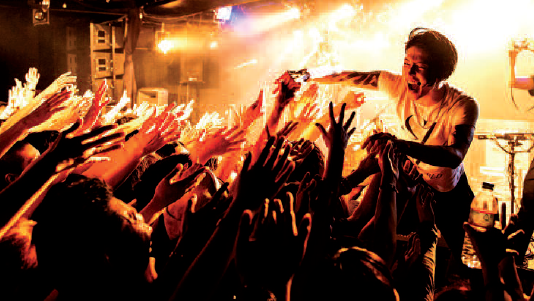 The world famous Miyavi was back in London during his latest European Tour and shared his thoughts with us.

Congratulations on the release of your album “We are all the others”. What is the big selling point of this album and were there any things that were tough for you in making it or any amusing episodes?

Miyavi: This is my fifth European tour, but last time, just after I finished the fourth tour, I had actually moved to live in America. As a Japanese person who travels the world I wanted to surround myself with a more global environment and grow more as a person, so I moved to America, including moving my children’s education there, and this album was made in the city of Nashville. It is actually much more global musically, mixing rock, funk and dance music. I felt the importance of learning about ones individuality and about the history in western culture, and in that sense it was a process in which I really learned so many things. But at the same time, the message behind it has to be what’s in the title, “we are all the others”, and this is something that I have felt travelling all over the world on tour for so long. Everyone is different, of different colours, but we should all accept each other and respect each other. I feel that having more of an awareness of and respect for that diversity will become more and more important in the future. In particular, having been born in Japan, an island nation, our attitude towards diversity itself is not very mature or developed. That goes for my past self and for the country as a whole, but after moving to America I strongly felt the value of diversity, through being an outsider, perhaps you might say being something “bizarre”, and placing yourself in a different system, as a different person from a different culture with a different language. Even though people are from different ethnic groups, we are all different, each and every one of us are all individuals. All kinds of news comes at us from the television, for example the refugee crisis. And especially for those kinds of conflicts, I think that this attitude towards difference is the origin of the problems occurring in the different regions of the world. Everyone is fighting for justice, fighting to protect something, but how aware are they of what their enemies are fighting to protect too? It is such a difficult proposition, but should humanity, as a species, not have been learning this kind of stuff for a long time now? But the fact that these things have not been solved yet is obviously something tied to human nature. So I created this album with a very keen awareness of how accepting others ties in to accepting oneself.

Please could you tell me about the origins of your distinctive slapping musical style and what influenced you in creating it?

Miyavi: That would be the shamisen. I hit upon it when I thought about what my own identity as a Japanese person, as an oriental person is, in the context of playing western instruments like the guitar and of western culture. It came to me, “ah, there’s the shamisen”. I am of the generation that was influenced by rock music growing up, so when I took up the shamisen it was not to play for its own sake, but with the idea that it would be great if I could somehow incorporate the essence of it into my guitar playing. Technically I have adopted the slapping techniques of base players such as Marcus Miller or Larry Graham, but the whole overarching idea started based on the shamisen and Japanese instrumentals. That is the true heart of it I think you could say. What I am currently aiming to create is kind of the musical equivalent of the sushi dish known as a “California roll”. From the perspective of proper traditionalist sushi chefs, the California roll is an aberration right? There are lots of Japanese restaurants in California where I now live, and it is precisely because of those kind of cultural bridges like the roll that people now eat sashimi here. Someone made a starting point for people to experience sushi rice and Japanese culture didn’t they? Of course, the California roll is not traditional and it is westernised, but in the end I think that kind of creativity, those kinds of things that can do cultural bridging, are huge. That putting in of the avocado, trying it out because previously there had been nothing in the traditional selection of sushi fillings which brought out that sweetness, I think that works too. It is exactly this kind of thing that I am trying to do with my music at the moment. I have my own soy sauce. And my own rice. I have my slapping and my appearance, and of course the things that only oriental people can bring to the table too. So in mixing that with western culture and becoming a cultural bridge to a global market, what is the avocado? Sometimes there are those people who are stubborn or who would put chocolate or something into that mix, but currently I am searching really hard with my music to look for the meaning of putting the avocado in there. To be honest I am groping for it, and it is not something which is all that easy, so I think I will have to step up a gear and try even harder.

I also hear you are doing well as an actor. Can you tell us any notable episodes about the film “Unbroken” that you performed in?

Miyavi: Well Jack O’Connell was from the U.K. and we got on really well. His accent was really strong so I had no Idea what he was saying most of the time, but we were surrounded by staff who I knew, starting with Angelina Jolie with her motivation and her vitality. It was one of her missions there. And I resonated with that. It was war. Not about who won or lost or who was wrong… I mean of course that was in the background of it yes, but more than that was how people can be strong in their lives and how beautiful they can be. I think it all depends on that. The world and society of the future will not have that way of looking at things either, with thinking based at the level of nations and regions, but instead at the level of individuals. Within a country there are many different people with different ways of thinking. I think this era calls for a more cosmopolitan outlook and I think it is an era where that is possible. Are we not now in an age where individuals have been tied closer together, especially with the development of the internet? We are in a time where artists, and even the audiences, are joined together so directly. So we have to think more about those links between people, and I feel that we have burst into a new era where we can think about just that. So in that sense it is why I am doing this acting stuff, and it is an education for me. I am seeing that there are other ways of expressing things outside of music. It is somewhat strange perhaps, but I have felt that perhaps it doesn’t have to be music and I don’t have to be so hung up on that medium. Of course, playing music and doing my slap guitar is also part of my identity, but I am not just that, and it is important for me to get across different messages. The medium for me to do that could be music or it could be acting or fashion, expressing things as the subject of a camera. It is all about what am I portraying in my performance and trying to express in the final product. So I really have a lot of tools. For my music it is my concerts, or outside of singing myself it can be playing at fashion shows or doing soundtracks. Basically I want to touch people’s hearts. I won’t be able to change the world directly by doing that, but I can move the hearts of the people who will build that world and who will change it. That is the biggest appeal and the greatest power of culture. So with the migrant crisis and the like, Angie has been working as an ambassador for the UNHCR for a long time, and she introduced me to the people who work for them. I visited one of the southern camps and everyone there was just a normal person. They were the same as you or me. Up until several months, several weeks ago, they were just living normal lives, eating at restaurants and talking to each other until they were caught up in this conflict between other people. They had to leave regions and places they know, places with memories for them, and paid their life savings to get on a boat or something. All said and done it is not just a problem for Europe. Somewhere within myself I have a feeling that this is linked to everyone’s living in a capitalist system and consuming each and every thing. It is a very difficult thing, but I really do have a feeling that this is the karma of capitalism catching up with us. But I was really nervous before I went. I am not as famous as Angie is and I wondered what I could really do there. So I took along a guitar and the children sang together with me. And just by being around music they were smiling. It was something so small, but it was something definite. I really felt it, that music has great power after all. What I do day in, day out from my own perspective was something very special for them and it impressed upon me all over again how we can be responsible for changing people’s lives. It was a great learning experience, meeting Angie while working on the film too.

Finally, please could we have a message for all the readers of Zoom Japan?

Miyavi: Exactly because of the age we live in, people can now move past the limits of “nations” and mix with others freely. You guys pay attention to, and are aware of, this country of Japan to a degree, whether that is Japanese food or fashion or music, and that makes me really happy. At the same time that you have feelings towards Japan, Japan also has a certain respect and affection towards other countries, such as the U.K. They are countries separated by vast distances, but I think it is a really great thing that there can be this shared awareness. I think that it would be great if people, my fans included, could become these kinds of bridges between cultures, so if you can then I would really want you to come to my show and check out the music.