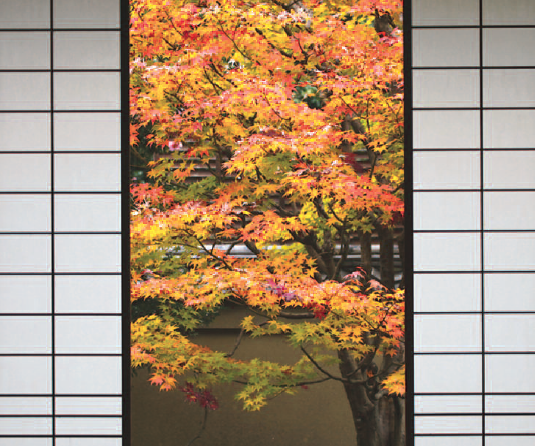 November sees the people of Japan searching out autumn leaves and celebrating three big milestones of childhood. November is the time of year to enjoy autumn leaves turned golden yellow and fiery red. The “koyo gari” or “autumn leaf hunt” is one of Japan’s classic seasonal leisure pastimes, and is as well established as the “hanami” flower viewing of spring. Sometimes people will drink sake with autumn leaves floating in the cup known as “koyoshu” but it seems there are few other examples of food inspired by the leaves. The most well-known traditional celebration in November is the “shichigosan” or “753 celebration”. As the name implies, this event celebrates the growth and development of children who have reached the ages of 7, 5 and 3 years old. In the past, when the infant mortality rate was very high, children who reached the age of 7 were said to be “children of the kami” and their survival to each of these three milestones was rightly celebrated. The first is called the “kamioki” and takes place at age 3 when both male and female children start growing their hair out. The second, the “hakamagi” is, for male children at age 5 when they first wear a hakama (a traditional Japanese garment similar to culottes). The final one is the “obitoki” for girl children aged 7, when they wear the traditional obi (belt/sash) for the first time. The nature of the three ceremonies used to celebrate these milestones today were actually formalised around the Meiji era (1868 to 1912). On the day of the shichigosan, families will usually travel to a shrine and have the holy man banish misfortune and evil away from the child. During these ministrations, a long, hardened sweet called a “sensaiame” is waved over them. The name translates as “thousand years candy”, which clearly indicates that it is the focus of the parents hopes for a long and healthy life for their offspring. After visiting the shrine the family will often take a commemorative photograph and have a special meal. However, in recent years the ceremony has been shortened from the classical version and more and more families just leave it at dressing the child in traditional costume and taking the picture.

No49 [DISCOVERY] Something for every taste