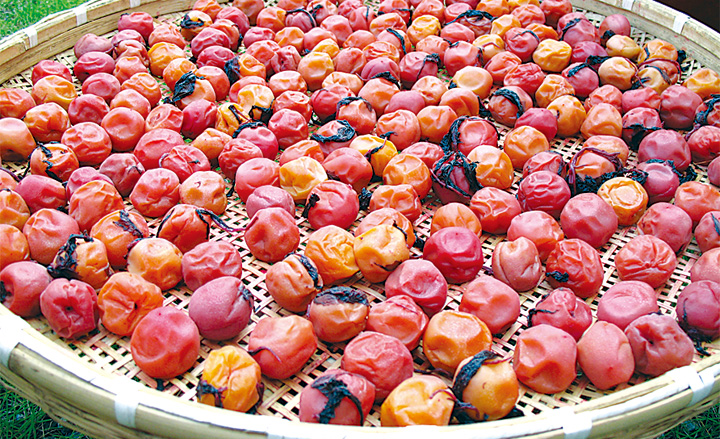 The secret to Japanese cuisine is often found in its traditional ingredients. Ume (plums) are a case in point.

If there was a food that could keep you from falling ill, wouldn’t you want to have some in your home? In Japan, such items are usually based on plums, known in Japanese as “ume”. This stone-bearing fruit is a relative of the apricot, and was first imported from China before the Nara period (710-794). Naturally acidic and poisonous, they would be unimaginable to eat raw, but once made into a drink or left to marinade, the abundant citric acid not only helps to fight fatigue, but also to overcome the effects of certain poisoning. In Japan, the plums found on sale in markets are mostly “aoume” that are, still green and unripe, but ideal for the preparation of the liqueur umeshu. When you have an important meeting the day after a big party, this plum wine is your friend, as its picric acid stimulates the function of the liver and will prevent you having a hangover! If you can’t drink alcohol, you could still make ume syrup: Put some cane sugar and some plums in a jar and let them macerate for 7 to 10 days. When the sugar has completely dissolved and the juice has oozed out, boil the syrup in a saucepan after removing the fruit and filtering the liquid. This will last for a year in the fridge if kept in a sealed preserving jar.

Serve by diluting it with either still or sparkling water. Once plums have ripened, they take on a yellowish tinge and resemble apricots. At this stage they are used to make umeboshi or pickled plums, literally translated as “dried plums”. Leave the ripened plums for at least a month covered in a volume of salt equivalent to about 12% of the volume of fruit, then dry them in the sun for 3 days. That’s all! Once pickled they can be kept in a jar in a dark place for over a year. If stored at a constant temperature they can even last for over a hundred years! Umeboshi are often used in bento because of their anti-bacterial qualities, and because they also act as an antiseptic for any food they come into contact with. This effect has been known for hundreds of years, and onigiri (rice balls) with umeboshi were served as battle rations to samurai in the Sengoku period (during the 14th and 15th centuries). It was also used to heal their wounds, but the magic of Japanese plums doesn’t end there! It’s important not throw away the juice, called “umezu”, which appears when the plums are pickled in salt, as this also contains nutrients beneficial for good health. It’s even said that saliva produced from its bitter taste contains a kind of anti-ageing hormone! If you haven’t got any any plums to make them yourself, you can find all these products in Japanese groceries or whole-food shops. It is also possible to adapt the umeboshi recipe to use similar fruits like mirabelle cherry plums or apricots that are more widely available in Europe, but remember to add some citric acid or lemon juice.

No27 [Eating] Madam is served