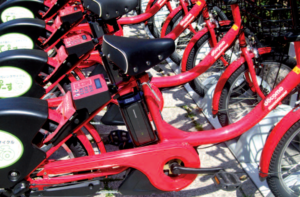 A system of self-service rental bikes allows you to travel around the city easily.

Hiroshima and its region are not lacking in interesting things to do. Here are some suggestions for making the most of your visit..

Every year, over 1.2 million people visit Hiroshima’s Atomic Bomb Dome and Peace Memorial Park. Important as it is to see this World Heritage Site, there are plenty more reasons to come to Hiroshima – the City of Peace – snuggling between the Chugoku Mountains and the Seto Inland Sea. Here are ten of the best:

It’s the City of Water
So-called because of the six rivers that carve downtown Hiroshima into a series of islands. Such an abundance of water gives the city a pleasant, open feel, making it especially spectacular at cherry blossom time (late March-early April), when mile after mile of riverbanks turn pink. Why not watch the world go by from the Caffe Ponte riverside restaurant opposite Peace Park or take a sightseeing cruise? Fancy something racier? Hail a Ganji Taxi speed-boat from any of the stone jetties going down to the river.

Miyajima’s Munchies
With its “floating” shrine and huge red torii gate rising out of the sea, Miyajima Island is rightly called one of Japan’s Three Most Scenic Places. However, locals also love Miyajima for its unique cuisine, such as oysters, so much a part of the island’s life that they even have a festival devoted to them (held on the second weekend in February). Other specialties include anago-meshi (rice topped with broiled conger eel) and nigirinbo (a fish-paste roll stuffed with cheese, bacon, asparagus and other delights). Miyajima’s most famous treat is the momiji-manju – maple-leaf shaped cakes filled with chocolate, custard or azuki bean paste. The deep-fried version – agemomiji – is particularly popular. At Daikon’ya you can watch them being made, then savour your purchase outside with a complimentary green tea while contemplating a delightful koi pond.

Art & Nature
Ride the Skywalk elevator up Mt. Hijiyama to the Museum of Contemporary Art, which rises out of the surrounding forest. When opened in 1989, it was Japan’s first public modern art museum. Designed by Kurokawa Kishio (co-founder of the Metabolist Movement), it won the 5th World Festival of Architecture’s grand prize. Outside, there are lots of little art installations dotted around the hillside, while Henry Moore’s massive arch frames a panoramic view of the city. The profusion of cherry trees also make Hijiyama one of the city’s favourite blossom-viewing spots.

No. 1 for Oysters
Hiroshima has been farming oysters since the 1500s. Today it produces 25,000-30,000 tons of oysters a year, 60-70% of Japan’s total production. Known locally as sea-milk for their nutritional value, they are eaten boiled, fried, grilled, with rice, in stews, or even raw. Cultivation involves suspending oysters from floating rafts, of which you will see hundreds dotted all over Hiroshima Bay.

Cycle Across The Sea
Mountains surround Hiroshima prefecture on three sides, but the fourth side looks out onto the Seto Inland Sea National Park. Explore its sleepy labyrinth of misty islands via the Shimanami Kaido, a stunning 65-km road and bridge route that joins Honshu, Japan’s largest main island, with Shikoku, its smallest. The bridges link six smaller islands on the way, with cycle and pedestrian lanes along the whole route, so you can quite literally cycle across the sea. The bridges start in the charming port town of Onomichi, a short train ride from Hiroshima city. 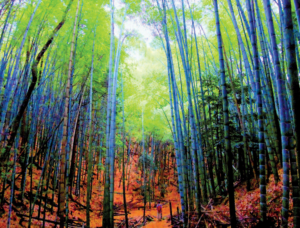 The incredible bamboo forest on Mt. Mitaki is a marvellous sight.

Mystic Mitaki
Dense woodland, three waterfalls, a 16th century pagoda and a ninth-century temple – all just two stops from Hiroshima Station! Mitaki Temple, at the top of Mt. Mitaki, is the city’s best spot for experiencing a bit of nature. The way up to the temple is lined with hundreds of statues of Buddha and red-caped jizo figures of all shapes and sizes, mosscovered and worn with age, adding to the mystic atmosphere. The two-tiered orange pagoda to the right of the entrance was dismantled and brought to Mitaki all the way from Hirogawa in Wakayama Prefecture (south-west Kansai) in 1951, to comfort the souls of the atomic bomb victims. Follow the trail beyond the temple into a shady forest of towering bamboo, where you may even spot some wild boar. On the way back down, take a break at the rustic Kuten-an cafe, half-hidden among the maples.

Mobile Museum
After the war, Hiroshima needed to get its transport system up and running quickly. Tram cars were donated from cities all over Japan and even abroad, earning the city’s fleet the nickname of the “Mobile Museum”. Today the tram fleet ranges from prewar clunkers to the futuristic Green Mover Max. The cheapest, easiest, and most eco-friendly way to get around town.

Football champions
Sanfrecce Hiroshima is one of Japan’s top football teams, winning the J-League Division 1 title in 2012 and 2013, and the Japanese Super Cup in 2008, 2013 and 2014. They also finished third in the 2015 Club World Cup. At the time of writing they have even reached the semi-finals of the Emperor’s Cup. Their magnificent Edion Stadium is set on a hill outside town, surrounded by landscaped parkland, complete with plum trees and a koi pond.

Brush Capital of Japan
Kumano, a village 20 kilometres east of the city of Hiroshima, produces 15 million calligraphy, makeup and artists’ brushes a year. That’s 80% of Japan’s total production. Of the town’s 27,000 inhabitants, 1,500 are brush craftsmen, hand-making brushes the traditional way. The best time to visit is on September the 23rd, when 10,000 brushes festoon the streets for Kumano’s spectacular Brush Festival. Be sure not to miss the Fudenosato Kobo brush museum, where master craftsmen are in residence to demonstrate Kumano’s unique brush-making heritage. The museum also houses the world’s largest calligraphy brush – a massive 3.7 metres long and weighing 400 kilos, suspended from the ceiling.

Samurai Garden
A sublime city-centre oasis, Shukkeien Garden was built in 1620 by Ueda Soko, a samurai warrior who became a Buddhist monk, tea-master and landscape gardener. He designed it for Asano Nagaakira, the feudal lord of Hiroshima. Shukkeien is actually a miniaturized version of the landscape of Xihu (West Lake) in Hangzhou, China, squeezed into a space of just 40,000 square metres. Ideal for losing yourself along one of the little side trails among isolated nooks, waterfalls, mossy rocks and lichen-covered lanterns, you’ll forget you’re just a five-minute walk from the downtown bustle of the city. Monthly tea ceremonies are held in the lakeside Seifukan tea-house to celebrate the changing seasons, including one for moon-viewing in September. The adjacent Prefectural Art Museum is also worth a visit.