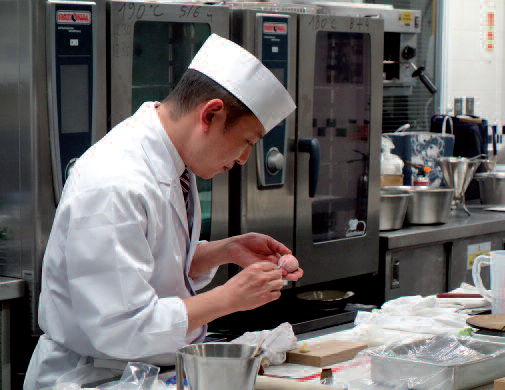 An event dedicated to Japanese confectionery (wagashi) was recently held in London on the 8th of February.
The wagashi event held at Le Cordon Bleu in London consisted of a lecture about the history of Japanese confectionery and a demonstration by artisan confectioner Mr. Takeshi Inoue, third generation owner and proprietor of the renowned Baika-tei in Tokyo.
Rice and azuki beans are two of the most important ingredients used in making traditional Japanese sweets. Japanese people grow up eating rice, which in the ancient period they believed was a blessing and a gift from the deities, due to how the plant turns gold, the same colour as sunshine, in the autumn. The colour of the azuki beans, on the other hand, is a deep maroon red, which was considered to be an auspicious colour and protect people from evil. By contrast, the white of rice symbolised pureness, and this is why red and white are often used together in Japan for joyous occasions. The scheme even features on the national flag.
Traditionally, Japanese culture has been very sensitive to the passage and changing of the seasons, and the old way of dividing up the year went much further than the four major seasons commonly recognised today. Each of the four major seasons was split into six periods, and each of those split further into three, making for a total of 72 distinct divisions in a year!
There are many kinds of wagashi, and what is seen as the highest quality class is eaten at traditional tea parties, especially accompanied by thick “koicha” tea, the higher class of matcha green tea (see Zoom Japan vol.45 for the differences between thicker tea and weaker tea). Another type are called omogashi, and come in 24 designs that correspond to the traditional calendar’s 24 seasons. Many of them are shaped to imitate the form of flowers or plants that bloom in the season they represent, but these are not always named directly after the plant itself. In ages past, cultured individuals would compose poems about the season and discuss these poems while eating the appropriate seasonal sweets. During the demonstration, Mr Inoue showcased several of these 24 seasonal wagashi. The various vivid colours are made by mixing up suitable quantities of red, yellow and blue coloured anko, a kind of jam made out of simmered azuki beans. A mixture of yellow and blue creates a green shade, but that the exact green used changes for spring and autumn. He also demonstrated one way to make the anko itself, describing how each confectioner will have their own unique methods. Contemporary people can learn a lot from the deep world of Japanese confectionary culture, which was born out of a philosophy of living in harmony with nature.

No50 [TRADITION] Tango no sekku