a master of science fiction addresses the question of the family in a brilliantly original way. 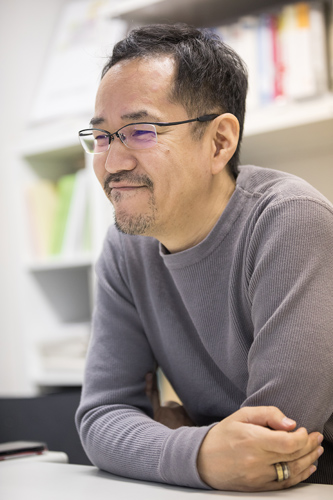 Kamiyama Kenji has tackled the theme of the family in an unexpected way.

Fans of SF anime know director Kamiyama Kenji very well. After all, Kamiyama has worked on several popular projects related to the Patlabor and Ghost in the Shell sagas besides directing other SF movies such as 009 Re: Cyborg. This time, however, Kamiyama has something quite different to offer his fans. Following on from his first original work, Eden of the East, which received critical acclaim, his new film, Ancien and the Magic Tablet (original title: Napping Princess: The Story of the Unknown Me) is a story that successfully mixes the usual robots with traditional fantasy elements, while exploring the enduring value of family ties. Zoom Japan caught up with the director after his appearance at the New York Children’s Film Festival.

People know you as a hardcore SF anime creator. This time, though, you have mixed the robots and hi-tech gadgets with fairytale-like elements. For instance, there’s a princess who’s good at coding, and mecha (giant robots) whose drivers have to pedal like mad in order to make them move. Why did you put together these seemingly disparate elements?

KamIYamaKenji :I wanted to do something different; a sort of family movie with a lighter, pop feel to it. Actually, when I was making this film one of the producers said to me, how about making something that could be a message for your daughter? This approach was quite new to me, even though with Eden of the East (2009) I had already added a comical touch that was absent before.

How did you get the inspiration for this story?
K. K. :I have a daughter who is 16 now, but when she was about three I used to tell her a bedtime story every night. I’d start with a traditional fable and then go off on a tangent adding bits and pieces
from anime or TV shows, eventually creating an original story just for her. I remembered how happy she was while working on this film, and used it as a start. Another source of inspiration was Tim Burton’s Big Fish. The son in that film doesn’t believe any of his father’s tall tales, but in the end they all turn out to be true.

What does your daughter think about your job?
K. K. :For many years I made the sort of adultoriented SF films she didn’t really like, and was probably too young to understand, but when she saw Ancien… she seemed to enjoy it. I guess she got a better understanding of the kind of work I do. Personally, I never create something specifically with my family in mind, but I was pleased when my daughter noticed a detail I’d included in the story. In one of the film’s flashbacks you can see the protagonist, Kokone, with a lightblue randoseru (typical backpack used by elementary schoolchildren in Japan). One day, I got an email from my daughter. She said that when she watched the film she realized it was exactly the same randoseru she’d had at the time. I was very happy to hear that.

Do you think Kokone-san is similar to your daughter in character?
K. K. :Not much, but they are both easygoing girls who like to sleep a lot and follow their own rhythm.

How did you create Kokone-san?
K. K. :All the heroines I’ve created so far are quick-acting, strong-willed women. I began to wonder what kind of person they would be if they were not warriors but normal teenagers. That was my starting point. From there, I created her character little by little, keeping in mind a young girl who, though just a high school student, would demonstrate the ability to take action when necessary.

Another novel element in this film is that you wrote the original story as well, right?
K. K. :Yes, I usually work from an existing manga, focusing at first on defining the characters. I did the same with Eden of the East, even though that was my original story. I first imagined the two heroes, Takizawa Akira and Morimi Saki – their life, habits and friends – and then developed their world. However, this time I started with the plot and added the characters later. 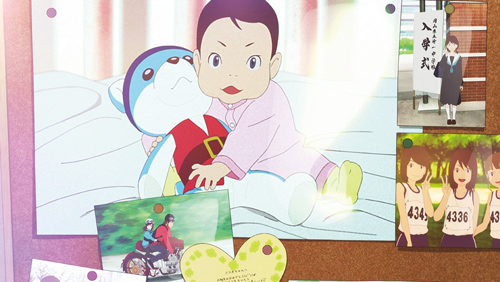 Like many young girls, Kokone-san is very attached to her childhood memories.

Kokone-san is a charming 18 year old. She’s about to graduate from high school and is trying to plan her own future. What kind of person were you at 18?
K. K. :At the time, I had already decided I wanted to become an anime director. In high school, I was already writing stories and scripts and making my animated works. I was rather shy. I had very few friends, but we all shared the same interests: making anime and video movies. We were completely absorbed in the activity. Like most boys of my age, I didn’t really talk to my parents or share my thoughts with them, so they were really surprised when I suddenly told them I wanted to work in animation.

To be a director means having to work with many people and seeing that everybody does his job as instructed. It requires someone with excellent communication skills. Was it difficult for you, as you mentioned being rather shy?
K. K. :In the beginning, when working with my friends, I was just content to follow their lead. However, little by little, I emerged as the guy with the better creative ideas. Also, the other members began to drop out, one after another, in order to pursue different interests. Eventually, I had to become more assertive in order to explain my ideas. That’s when I realized I had the qualities to become a director.

At the New York Children’s Film Festival, a kid in the audience candidly asked you how you had made your film, and you simply said that you had gathered together 200 people, and you had all drawn pictures every day for a long time. That was a very cute exchange but can you tell me more about the creative process?
K. K. :I’m not the kind of guy who usually spends a lot of time on drawing pictures myself, so I tend to delegate a lot of the creative work to other staff members. The problem is choosing the right people to get the job done. They may be talented, but not good team players. As a director, I always have to pay attention to what they do, how faithfully they accomplish what they are instructed to do, and see that everything
goes smoothly. Inevitably, problems will emerge especially when you work with a group of creators each one of whom may have a different opinion on how something should be done. So I have to explain that their idea is good, but it’s not a good fit for this particular story. Things get even more complicated when you work on an original story. If you have a manga to start with you at least have an established model to follow, but in the case of Ancien and the Magic Tablet the whole story was in my head, and sometimes explaining my vision to other people can be very difficult. That’s why I usually need to be more hands-on than I would like. In the end, I have to do some of the things myself, which other people were supposed to do for me. When working on Ancien…, this was especially true with the post-synchronization. When you have to add sounds to a film with 300 sequences, it becomes very time consuming.

Have you ever had doubts about this story?
K. K. :
Yes, there were times when I doubted my choices and thought about giving up. Again, when you work on an original story, you can’t really know what it’s going to look like until you’re finished. You must have faith in yourself.

The story starts three days before the opening of the 2020 Tokyo Olympic Games. Why did you choose this time frame?
The first Tokyo Olympics in 1964 are still remembered as an incredible success – an event that showed the world what Japan had achieved after the war. Everybody who lived in that period has very fond memories of the
Olympic Games. I was born two years after the Games, so didn’t experience them directly, but heard a lot of stories and felt the great pride everybody shared for Japan’s success on the world stage. But now things look very different. Young people like Kokone have no particular expectations about the Games, and you don’t feel the same kind of excitement. As you know, six years ago we had a huge earthquake and tsunami. Since then, Japan has really not been the same as it has lost a lot of its spirit. We see conflicts between different generations, between young and old, and even technology, a field that Japan was very strong in, has been quite sluggish. I was looking for something that highlighted this difference between current Japanese society and the old times, while at the same time injecting a feeling of enthusiasm, and I found it in the Olympic Games.

What do you think about Tokyo 2020?
K. K. :I share most people’s negative opinions about the way money has been used for the Games. I’m not particularly happy about them. As I said, today is very different from 1964, and this country has nothing particularly good to show to the world.

Kokone-san lives in a small town in Okayama Prefecture. Why did you choose that particular location?
K. K. :I visited this place on a trip, and I liked it so much that I thought I wanted to use it one day in one of my films. I also wanted to show the growing gap between Tokyo and the rest of the country. That’s why the first half of the story takes place in Okayama, while the second part is set in Tokyo.