Just 50 years ago, this famous ward in the Japanese capital was one of the main centres of rebellion in the country. 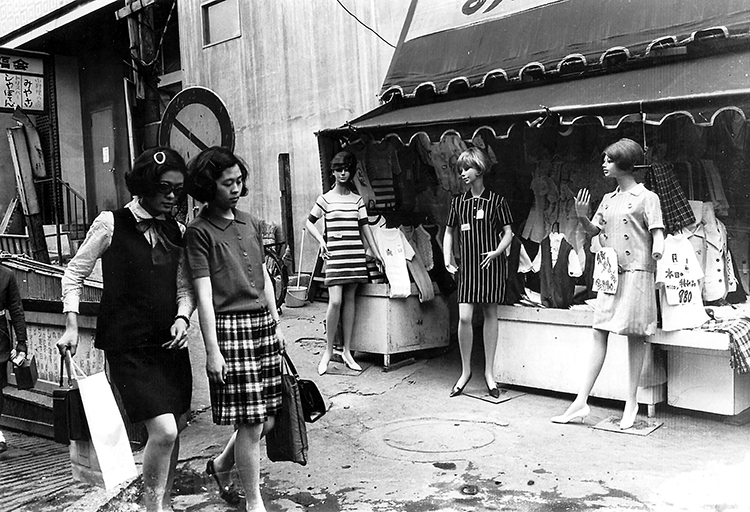 Shinjuku in 1968 as seen by Watanabe Hitomi in his book 1968 Shinjuku (pub. Machikarasha, Japan).

These may be photos of the past, but they show the present”. This testimonial from famous photographer Araki Nobuyoshi appears on collection of photos by Watanabe Hitomi. The publication of this book, in 2014, by the small publishing house, Machikarasha, passed almost unnoticed, but it’s a gripping testimony of life in Japan at that time, and is also a reflection of what Shinjuku has become. Simply entitled 1968 Shinjuku, it allows us to understand the degree to which this Tokyo ward was at the centre of the unprecedented cultural turmoil, and transports us back in time as though nothing had really changed in 50 years. However, though Shinjuku remains the beating heart of the city to some extent, we have to recognize the fact that it’s far from being the same centre of cultural ferment as before. We need to travel west towards Nakano to rediscover some of this lost atmosphere.

Though there had been a short period of great unrest in Paris, which became known in the history books as May 1968, Tokyo was at the centre of widespread upheaval, which lasted at least a decade. “I think it was a time when we were all angry. We were all rebelling against our parents’ generation,” confides the mangaka Sasaki Maki whose work portraying life in 1968, he agrees, was filled with “rage”. “I might have been messing around or experimenting, but I was angry,” he states in an interview in Charivari!, a collection of his manga from 1967-81, recently published in France by Le Lézard Noir. Questions about the rise in university tuition fees or the renewal of the U.S.-Japan Security treaty, which brought millions of people out onto the streets at the start of the decade, as well as other issues such as the Vietnam War, in which Japan was involved indirectly as U.S. bases on Japanese territory played a vital role in the American military effort, and the rising awareness of ecological problems, all fed into the anger he depicted in his drawings, but it was an anger common to many other young people at this period. Though Paris and its barricades became worldwide symbols of the rebellion of young people born after the Second World War, it would be wrong not to dwell a moment on what was happening at the same time some 10,000 kilometres away. This is the reason, on the eve of celebrating the events of May 1968, we want to shed light on Shinjuku and the testimonies of those who spent most of their time there and saw how it evolved. It’s a place of ever changing memories, and it’s important to remember the crucial role it played in contemporary Japanese history, so we can understand better the ways the country itself has changed since then.