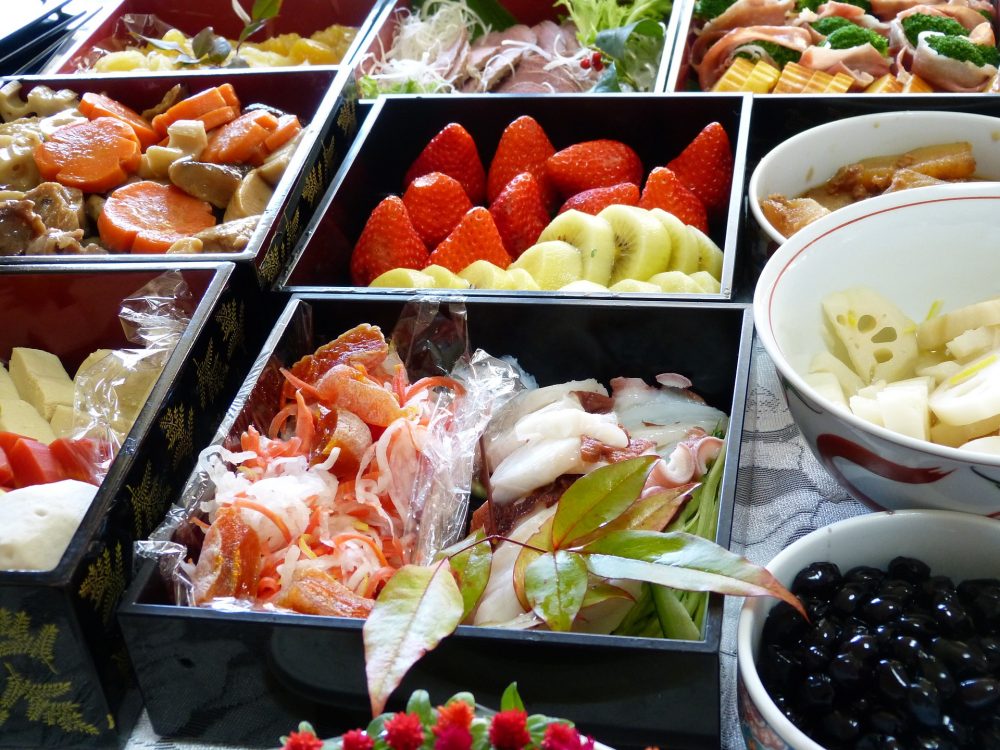 This column will include useful Japanese phrases that cover a variety of topics.

Konnichiwa, mina-san! (Hello, everyone!) There’s only one month of 2018 to go! How do you all spend New Year? This time of year is an important time in Japan for preparing for the New Year. First of all, colleagues, friends and relatives write each other “New Year’s cards (nengajoo)”. These are greetings cards like Christmas cards, and if people send them while it’s still the previous year so that they can arrive all at once on the morning of 1st January. As well as nengajoo, people clean their entire house and prepare “osechi” (Japanese traditional food for the New Year). And as the holidays draw closer, everyone at work no matter their position in the organisation will enjoy a “forgetting the year (boonenkai)” party. “忘 Boo” means “to forget” and “年 nen” means “year”. It’s a “会kai” (gathering/ party) where everyone drinks alcohol together to forget the difficulties of the previous year’s work! This month, I’ll teach you the special “year’s end greeting” that colleagues and friends say to each other the last time they meet before the New Year.

Picture this: It’s the last day of work before the New Year! The work day has ended and you are leaving the office, so you must say a “year’s end greeting” to your (senior) colleagues so you can put the past year of work behind you!

(Thank you for all you have done for me this year.)

(Best wishes for the New Year!)

Next, “Yoi otoshi o” translated literally means “good year” – but that is because the second half of the sentence has been abbreviated. In Japanese, if the two people in a conversation understand what is being talked about, then the subject or the verb are sometimes abbreviated. If you were to write out the full sentence, it would be “Yoi otoshi o omukae kudasai (“I hope that you have a good year”). The half abbreviated sentence, “Yoi otoshi o”, is a special phrase everyone knows the meaning of. If you want to be more formal, then you should use the full phrase.

So now you have successfully finished your last day of work for the year and the long-waited New Year’s holiday is upon you! For Japanese people, New Year’s (especially from 31stDecember to 3rd January) is a time for all the family to get together and is the year’s busiest and liveliest special time. On New Year’s Eve, the family gets together and everyone eats “toshikoshi soba” noodles together. When the countdown to the New Year approaches, the family goes out for the “ni nen mairi” shrine visit. “Toshikoshi soba” New Year’s noodles are a tradition that started in the Edo Period. Compared to other types of noodles, these are easy to cut so they represent “cutting away the year’s misfortune”. They are long and thin, so they also represent wishing for a long life. The name “toshikoshi” combines “年 toshi (year)” and “越す kosu (to pass)”, so “toshikoshi” means to enter the New Year – and so people eat them on 31st December. And some Japanese people go to the shrine or temple to pray (“参り mairi”) on New Year’s. Because the shrine visit spans the old year and the New Year, it is called the “二年参り ni nen mairi (“two year prayer”). Unlike New Year’s Eve in the UK which calls up images of a lively night full of fireworks, there is a quiet and peaceful atmosphere in Japan with the sound of “joya no kane” – temple bells ringing out the old year with one hundred and eight rings. If a Japanese person hears this sound, they will have a profound feeling of “oh… this year has finished”.