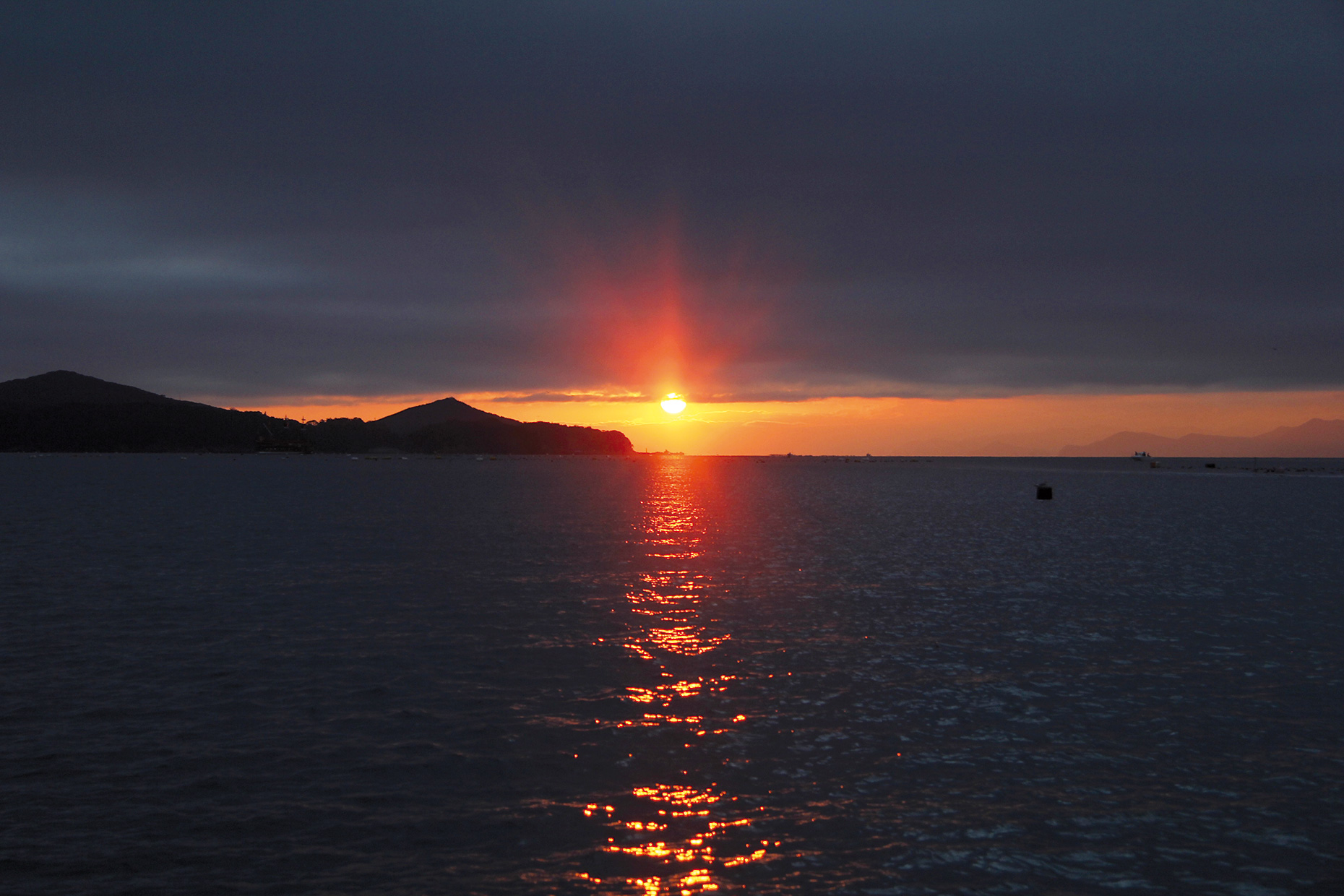 Those who love to watch the sun setting will find something to satisfy their passion in this part of Japan.

An unspoilt marine oasis, Ago Bay in the Ise-Shima region is full of wonderful discoveries.

The sea is calm and peaceful in Ago Bay, in the region of Ise-Shima, Mie Prefecture. To keep the water pollution-free, there are no boats, just the gentle lapping of the waves. You can spend hours at the Yokoyama Observatory, surrounded by mountains, and contemplate the breathtaking views over the sea. The 60-odd islets of all sizes are characteristic of the region, and present a harmonious and relaxing whole. It’s in the waters of this bay that the world-famous Mikimoto jewellery company cultivates its precious pearls, which are sold as far away as Place Vendôme in Paris. The effects of the extraordinary life of its founder, Mikimoto Kokichi, are evident throughout the region.

Born into a family of soba (buckwheat noodles) manufacturers, he developed an unusual grasp of business at a very young age. “On a visit to Tokyo, he met a Chinese merchant who was selling pearls at exorbitant prices, and the idea of cultivating pearls immediately occurred to him, though it was something no-one had yet achieved,” recounts Inoue Tatsuo, the manager of the Mikimoto Pearl Island museum. At that period, it was extremely rare to find pearls in the sea: an experienced diver would risk life and limb to collect just four or five every three months or so.” On his return to Toba, Mikimoto Kokichi, an entrepreneur to his fingertips and an excellent business man, decided to discover the secret of cultivating pearls with the help of the akoya oysters which grew in abundance in Ago Bay. The idea was simple, but not so easy to carry out: with the support of his wife who shared his crazy dream, he attempted over many years to find a way of successfully implanting a small bead in an oyster, so that it would produce nacre (mother-of-pearl) to envelope the unwanted irritant. On 11 July 1893, following years of failure and after just having lost 5,000 oysters in a red tide (algae bloom), he obtained his first five cultured pearls on Ojima Island, in some shells left over from the natural disaster. His wife, Uma, died three years after this first success, leaving behind five children and never knowing about the Mikimoto empire that would come into being.

“At the start of the cultured pearl story, losses were enormous,” adds Agathe Torz, in charge of foreign visitors to the Mikimoto Pearl Island museum. Once the bead has been implanted, it takes two to three years for the oyster to produce the 2,000 to 3,000 layers of nacre necessary for a high-quality pearl. During this time, it’s watched over like a pan of milk on the stove. “A pearl oyster is very sensitive. The least amount of pollution, the slightest change in water temperature and the cultured pearl is lost.” Just offshore from Toba, the Mikimoto Pearl Island museum can claim to be the pearl centre of the world. Here you can learn everything about the local cultivation of pearls, but also about oyster shells from all over the world, alongside specific information about locally cultured pearls and their historical and economic impact on the region of Mie, not forgetting the development of what over time has become the Mikimoto jewellery business. “The jewellery workshop only keeps around 5% of the pearls cultivated each year: the roundest and shiniest. Those with the most perfect nacre,” Agathe Torz states.

At the Mikimoto Pearl Island museum, you can also observe the ama, the famous female snorkel divers, also a fundamental part of the region’s identity. At one time, they collected the oysters to be implanted as well as then returning them to the sea,” adds Agathe Torz. Now, they no longer work producing cultured pearls, it’s completely automated. They put on demonstrations for the museum in the name of “folklore”. Dressed in their very recognisable diving outfits made of white material, the ama-san still dive between March and September to gather awabi, the very expensive abalone principally eaten during New Year celebrations, and sazae, another type of local shellfish. To get to know these women better, who are well-known for their feisty character, you must leave Toba and travel to the heart of Ago Bay, right at the end of the Shima peninsula.

This is where 69-year-old Mitsuhashi Mayumi lives, in the village of Wagu. She loves the sea, has been an ama-san for 37 years and misses the time when “there many more of us. Today, there’s no more than a few dozen, so we stick together. Ama are strong women,” she smiles. They are the last survivors of an ancient tradition, and continue to dive at all costs. “When I am deep under water, I think of nothing else. If I were troubled with negative thoughts, I’d put myself in danger. Above all, I must not hold my breath for too long. I must be calm and relaxed.” With a serious look on her face, she adds gravely, “When you’re deep under water, you’re as alone as you are when facing death.”

This widow is surrounded by her three children and eight grandchildren. Her energy and strength exude from every pore of her body. “Physically, you need to be as strong as iron to be an ama. The youngest in our group is 46. I know one ama in the region of Wajima, in the Noto Peninsula, which projects into the Sea of Japan, who is still diving at the age of 82: it’s all in the mind. Unfortunately, it’s a profession that will disappear completely, we’re the very last survivors,” she explains regretfully. Mayumi learned her profession from a teacher who was very dear to her, “just diving and swimming has nothing to do with it. You need many years apprenticeship before you’re proficient.” Her resistance to the cold is “natural. Personally, I even dive in winter to look for namako (sea cucumbers).” It’s a way of life that’s at the mercy of the weather, and “that’s what’s the most difficult: always having to juggle with the vagaries of the climate to decide whether or not one can dive.” She says, teasingly, “Now there are men who dive too, but they wear wetsuits: ama is a women’s profession, they can’t resist the cold like us without all their protective gear.” In Sato-umi-an, some ama are getting ready to meet some travellers and introduce them to their profession. In a wooden hut facing the sea, they cook fish and shellfish for a large meal, and explain how they work, showing the visitors the tools they’re permitted to use to scrape the shellfish from the rocks. “We each have our own little secrets: I make my own diving mask, for instance,” she says, displaying it proudly.

For those who want to know more about the region’s cultured pearl industry, not far from here Morita Tochiko welcomes visitors, directly alongside the nets where the oysters implanted with a nucleus are placed. This little lady with a wonderful turn of phrase has always earned her living from the cultivation of akoya oysters. She loves to recount the story of her little fishing port, to observe the fish that swim in the clear water, and to watch the oysters grow. She even gives you the opportunity to look in the nets yourself to find an oyster and extract a pearl. “Akoya oysters are not edible, apart from this tiny little bit which you eat raw, it’s very good! Go on, eat it!” she exclaims, and bursts out laughing. Once the pearl has been retrieved, it’s off to the workshop where it can be worked and mounted onto a piece of jewellery if you wish. An unforgettable souvenir.

The region of Mie is particularly proud of its seafood products, and its cuisine is also quite exceptional. From its small sushi restaurants to the grandest luxury restaurants, alongside the wide variety of shellfish, you’ll be served ise-ebi, a kind of small local spiny lobster. At the Sushifumi fish restaurant, you can eat a dish of sardines with vinegar and ginger that’s outstanding, and for the finest of meals, the Shima Kanko Hotel in Kashikojima will astound you. Since 1951, this exceptional establishment has offered its clientele an incredible view of the islets in the bay. The Emperor has been a frequent guest and the hotel was chosen to host the G7 summit in May 2016. The writer Yamasaki Toyoko also stayed here between 1955 and 2007, and often referred to the view over the sea from the hotel in many of his novels.

For the Japanese, Ise-Shima represents a highpoint of culinary know-how, but, above all, it also symbolises a deep-rooted connection with the history and religion of the country, as illustrated by Ise-Jingu, which is considered to be the most sacred of the all Shinto shrines in the archipelago. That’s the reason it attracts dense crowds of people throughout the year. People come to pray, to imbibe spirituality, to engulf themselves in the surrounding nature. Within the Ise-Jingu complex, there are two main shrines: Kotai Jingu (Naiku), dedicated since 2000 to the ancestral goddess, Amaterasu, protector of the Imperial family and guardian of Japan, and Toyo-uke (Geku), dedicated to the god Toyo-uke. More than 1,500 religious rituals take place here to please the Japanese gods and to ensure world peace, prosperity for the Imperial family and a good harvest.

In the 1990s, out of a deep sense of gratitude for this beautiful place and to give thanks for nature’s generosity, the city of Ise devised Okage Yokocho, a maze of little streets and small artisan shops at the foot of the shrine. During the Edo period (1603-1868), Ise-Jingu attracted many pilgrims, and to recreate the atmosphere of this bygone age, buildings dating from the Edo and Meiji period (1603-1868) have been renovated or reconstructed. You’ll find old-fashioned flavoured sweets and traditional children’s toys, pearl jewellery, of course, and crafts. It’s undoubtedly the best place to try ise-udon, a local speciality made with thick noodles, as well as imoan, a Japanese sweet made from sweet potato, or even a cone of freshly roasted chestnuts…