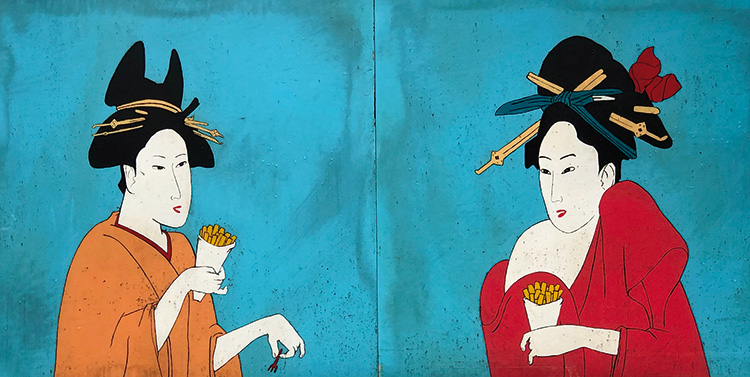 In the city centre, many stalls have been decorated by street artists inspired by Japanese art.

Former HQ of the Dutch East India Company, the port is an ideal destination for lovers of Japanese culture.

After Japonismes, the incredible season of Japanese culture that France has been enjoying since July last year, and before London and the United Kingdom in their turn experience a proliferation of events, including the largest manga exhibition ever organised outside Japan, which opens at the British Museum on 23 May, why not visit Amsterdam, in the Netherlands, to immerse yourself in a Japanese weekend? Of course, you could travel there just to walk along the canals and enjoy this city’s wealth of architecture and its many other charms. But you should not forget that all these riches that are still here for us to feast our eyes on are in part linked to the special connections Holland has maintained with Japan since the 16th century. Do we need to be reminded that Dutch merchants were the only Westerners permitted to trade with the Archipelago during the two centuries the isolationist policy decreed by the shogunat lasted? They settled in Hirado, then on the island of Dejima in the bay of Nagasaki, and allowed Europeans to discover Japanese culture as well as ensuring that Japan was not totally isolated and thus able to resist the imperial ambitions of the Western powers from the middle of the 19th century.

To understand the importance of the role played by The Dutch East India Company (Vereenigde Oostindische Compagnie, VOC) founded in 1602, a year before the shogun (military dictator) Tokugawa Ieyasu decreed that the country should be closed to foreigners, you need only pay a visit to its headquarters at Oost-Indisch Huis (Oude Hoogstraat 24), built in 1606. Owned today by the University of Amsterdam, it’s not open to the public, but you can still admire its grandeur and remember that it was home to the activities of the first multinational corporation in the world. The VOC did not hold sway over trade worldwide solely because of its trading post in Japan, but it was the only company to benefit from access to Japan. So it’s not surprising that there are remnants of that strong relationship, which lasted for 250 years before other Western companies had any contact. The Japanese, without knowing, use many Dutch words daily. From biru (bier, 1724 – “beer”), to garasu (glas, 1763 – “glass”), kohi (koffie, 1797 – “coffee”), Japanese vocabulary was enriched over time thanks to the Dutch while, at the same time, Europeans were able to become captivated with Japanese arts and crafts carried back in the ships of the VOC.

Should we search for the roots to the interest Europeans have nowadays for the culture of the Land of the Rising Sun? It’s a difficult question to answer, but it’s a fact that Amsterdam remains an important place to keep in contact with Japan. Unlike in the past, many Japanese have now settled in the Netherlands, whose advantageous tax system has encouraged several Japanese companies to locate their European headquarters there. Today, there are 8,000 Japanese residents in Holland, half of whom live in Amstelveen, a few kilometres from Amsterdam. So the ties remain strong and explain why some Japanese favour the Netherlands to strengthen their cultural connections with Europe. This is certainly the case for Yoshida Ryutaro, president of Time & Style, which specialises in promoting the art and craft of a Japanese lifestyle. With several shops in Tokyo and a factory in Hokkaido, he hopes to open a branch in Europe. “Amsterdam is an obvious choice,” he confides. “People here have an affinity with the aesthetic beauty we advocate. The fact that their buildings with their large windows face outwards is another important reason as it allows items that appeal to people to be shown off to their advantage.” So, in 2017, he took possession of a former police station (Marnixstraat 148, open Tuesday to Saturday from 11:00-19:00, Sunday from 11:00-18:00, www.timeandstyle.nl) and, over three floors, offers a selection of varied and unique products (furniture, china, decorative items), which showcase traditional skills. “We want to preserve and use techniques acquired by our ancestors to create objects that will find a new lease of life in our modern times,” he adds. For this reason, he regularly invites craftsmen and women to visit to not only exhibit their work but also, during private views, to explain to the large numbers of curious people who come how they produce their creations. Ceramicists, cabinet makers, master glaziers are thus able to widen their audience appeal and find buyers for their work, which is difficult to resist, especially as the prices are not prohibitive.

Other Japanese creators are also choosing Amsterdam to launch their activities in Europe. Each year, at the beginning of February, the Lloyd Hotel hosts the exhibition Mono Japan (1-3 February, from 10:00-18:00, Oostelijke Handelskade 34, https://monojapan.nl). The event has a special feel to it as the artists are resident in the hotel and unpack their products every morning to display them. It seems unnecessary to point out that it’s really worth making the effort to get there as it’s guaranteed you’ll find something to enhance your home. There are numerous workshops on offer. To learn more and to buy an entrance ticket, visit the Mono Japan website.

Dutch interest in Japan is not limited only to handicrafts. Popular culture is not left out, as demonstrated by the imposing exhibition Cool Japan which is taking place in the Tropenmuseum until 1 September 2019 (Linnaeusstraat 2, Tuesday to Sunday from 10:00-17:00, www.tropenmuseum.nl). Amsterdam’s ethnographic museum is not just displaying work connected to the world of popular culture, which is often the case for events dedicated to this aspect of Japanese culture. The exhibition curator hoped it would lead to a better understanding of why manga, animation and, more broadly, the Japanese imagination have managed to conquer the world. In order to be free to choose which artists to invite to display their work, he didn’t ask for any official financial help. That may seem to be an insignificant detail, but you can see the difference it made as you make your way through the exhibition, as long as you take the time to read the notices that accompany the exhibits, which range from a Tezuka Osamu original to the robot Pepper, from Hello Kitty! shoes to an item of ancient armour.

The only regret is the lack of a catalogue, which “would have taken years to compile,” Daan Kok assures us. Informative, fun and affordable, this exhibition is unmissable, as is the Nihon no hanga museum (Keizersgracht 586, www.nihon-nohanga. nl), a private collection of modern Japanese prints, which is a good example of Amsterdam’s pioneering role in its approach to Japanese culture. Instead of concentrating on what is already widely well-known, it turns its attention towards lesserknown areas. Open every weekend from May to November, you can also visit this museum by appointment. If you’re unable to get there, have a look through Vagues de Renouveau, the magnificent Nihon no hanga museum catalogue published by the Foundation Custodia (€49). The Rijksmuseum (Museumstraat 1, open 09:00- 17:00), www.rijksmuseum.nl) or the Van Gogh Museum (Museumplein 6, open from 09:00, www.vangoghmuseum.nl) are examples of a more classic approach to exhibitions about Japan, and nowhere will you see anything more stunning than the two magnificent 14th century wooden temple guardians at the Rijksmuseum.

As for Japanese restaurants, there are plenty to choose from in Amsterdam. Akitsu (Rozengracht 228-230, open Tuesday to Sunday from 18:00- 22:00), situated near to Time & Style, is excellent and offers a variety of reasonably priced dishes. For less sophisticated food Fufu Ramen (2A, Elandsgracht, open Tuesday to Sunday from 12:00-15:00 and from 17:00-21:00) will suit ramen fans, unless you just can’t resist a portion of chips from one of those stalls decorated with images of elegant Japanese ladies. Amsterdam is waiting just for you!

▶︎PRACTICAL INFORMATION
THE QUICKEST WAY TO to get there is by train as it takes only 3hrs 50min from London to amsterdam by eurostar. Tickets from £44.50. Travelling by coach is less expensive, starting at £20 with Flixbus, for example.