Niigata Prefecture is home to the largest number of breweries in Japan, with some 90 companies. 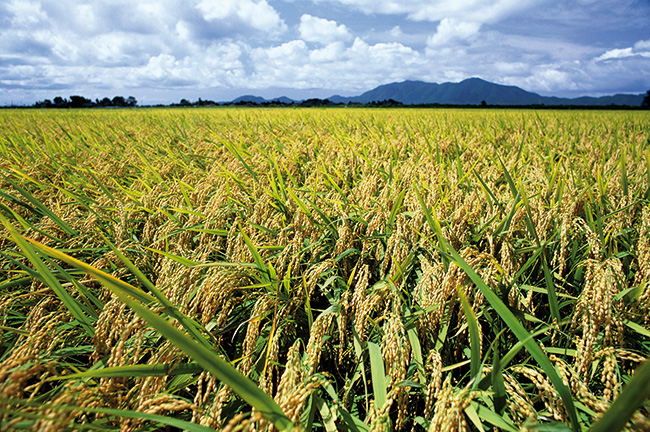 Rice produced in Niigata is considered to be the best in the country.

It’s 9.40 a.m. on this particular Saturday, in the port city of Niigata, situated on the Sea of Japan coastline. In front of the Toki Messe convention centre, queues of people wait excitedly for the opening of “Sake no jin”, the largest sake fair in Japan. The fair has taken place for the past fifteen years, and offers visitors the opportunity to discover and try sake products from 85 of the 90 breweries in Niigata Prefecture, representing the very best of nihonshu (fermented sake). When the entrance doors open, the first in the queue, some of whom have been waiting for more than two hours and are familiar with the event, rush in to get to the producers’ stands. During the two days of the fair, 130,000 people will file past the stands, and the celebrated Japanese beverage will flow in the festival-like atmosphere.

In Niigata, where the winters are bitterly cold and it snows for six months of the year, it’s said that a good sake is essential to survival in such a harsh climate. The emblematic Japanese drink “represents perfect harmony between rice and water,” recalls Kitazawa Akiko, spokesperson for the historic Imayo Tsukasa brewery. “The knowhow is all about the choice of rice, how much it’s polished, the quality of the water, and controlling the fermentation.” And that’s it. The key to the quality of the drink is in the polishing: the more highly-polished the rice, the finer and more delicate the sake. And this is what Niigata has staked everything on for a very long time.

In this prefecture with the highest consumption of sake (2.4 litres per inhabitant) in Japan, it’s considered to be a treasure. People cherish it, and are proud that it’s gained a reputation and is enjoying an upsurge in popularity today. “At the beginning of the 1970s, the sales of sake peaked in the archipelago,” remembers Odaira Shunji, president of the Niigata sake brewers. “In the aftermath of the war, famine raged, and production came to a halt: rice had to be kept for food. When we were able to start making this alcoholic drink again, everyone cheered!” Then, gradually, in the face of competition from wine, beer, and even shochu (alcohol made mainly from sweet potato), the Japanese shunned sake, which they considered old-fashioned. In Niigata, “people continued to drink it,” observes Odaira Shunji. “Consumption peaked in 1998.” The prefecture used innovative and unique methods of production, and distinguished itself by gaining the highest ratings, alongside Kansai (Osaka and Kyoto region), the other region producing excellent- quality sake.

In Odaira Shunji’s opinion, this success is due, above all, to the rice used, which is cultivated locally and considered to be one of the best in the whole country. Then, the most important choice is the degree to which the rice is polished in order to obtain the finest and driest taste, what the local inhabitants call the “Niigata Tanrei”. “For about thirty years now, we’ve taken the decision to depend on a wide range of know-how, which encourages the production of high-quality sakes and, today, these are the ones that sell the best. Admittedly, the Japanese consume smaller quantities of sake, but they’re ready to invest in the best quality sake.” The classification of sake categories corresponds to the degree to which the rice is polished, as the centre of the grain contains the most starch. For the lowest category of sake, junmai-shu, it’s 70% or more; for tokubetsu- junmai-shu, 60%; for junmai ginjo-shu, less than 60%; and, finally, for the highest quality sake, junmai daiginjo, it will be 50% or less.

“For some of our sake, the polishing of the rice grains falls to 35%,” specifies Kitazawa Akiko, as she enters one of the production rooms in the brewery where she works. The Imayo Tsukasa Brewery stands in the heart of Niigata city. Founded in 1767, it’s an institution in the archipelago and demands respect from those who pass through its majestic entrance door. Immediately, your nose is filled with the fragrance of rice and the smell of the wood from which the whole building is made. “There’s a legend that says that, at one time, the Imayo Tsukasa Brewery was located in a secluded spot on a nearby mountain, and noone knew exactly where,” continues the brewery’s spokesperson. “It moved here during the Edo period, and expanded around this central wooden structure.” Right at the back of the brewery is a little shrine enthroned on a platform, accessible by means of a stepladder. “That’s where we come to pray to the god of sake whose temple is at Nara,” she confides. “A slight change of temperature can jeopardize the whole process of fermentation, and thus the whole production of alcohol, so we pray that everything goes well and that it tastes perfect when it’s bottled. In Niigata, sake is not just an age-old traditional know-how, but a religion.”

Obata Rumiko would not disagree. She inherited the Obata Shuzo brewery, which produces the celebrated Manotsuru sake, and is the only woman in the prefecture to manage an establishment such as this. A participant at the “Sake no jin”, she smiles broadly, and is here to let people sample her family’s produce. Her friendly face betrays a strong character and a definite pride in representing her native Sado Island. At one time, she hadn’t the slightest intention of taking up this difficult profession. “I studied communication and cinema, which I was passionate about,” she explains. “I followed that career path, in Tokyo, until I was 28 years old. Then my father fell seriously ill. I was frightened, I realised he would not live forever.” So she returned to Sado with the aim of taking over the family brewery, founded in 1892. Today, her father is as fit as a fiddle, and she doesn’t regret her choice for one moment.

“We’ve started to use a traditional production technique again, using oyster shells to filter water,” she says, smiling. “We take great care of our environment and our raw materials: it’s the only way to create real sake.” Off the coastline of Niigata, the mountains of Sado are silhouetted. Above its farmland and rice fields stretching as far as the eye can see, you catch sight of a toki (Japanese ibis) in flight, the prefecture’s famous emblem, which is now an endangered species. Depopulation is seriously affecting this small corner of paradise where, nowadays, there are only five sake breweries compared to around a hundred at one time. “A few years ago, the primary school closed down: in this magical place where you can watch the most beautiful sunset in Japan.” Obata Rumiko made an investment here, in 2010, and set up a second brewery, then founded a school, in 2014, where training sessions are organised. Making this drink is “like looking after a baby,” she says. “It’s important to pass on our know-how.” This is especially true as the Obata Shuzo brewery uses traditional methods where the rice is hand-crafted, and pressed in the old-fashioned way “in sacks hung from the ceiling”. She also uses 35% polished rice. “It’s a sake with an unusual character. Drinking it is like meeting a woman who you’d want to see time and time again.”

Obata Rumiko is very focused on the international market, and her bottles of sake are sold in 14 countries including the United States, Singapore and Korea. In Europe, though people easily confuse the strong Chinese alcoholic drink sold in sushi restaurants with the delicate-tasting sake drunk in Japan, connoisseurs of the latter are working hard to introduce the drink to novice palates. Since last spring, the great chef Guy Martin, for instance, has had sake from seven Niigata breweries available on the menu of his two Michelin- starred restaurant. The chef of the Grand Véfour who has “travelled more than a hundred times to Japan” has been won over by this “country that gets under one’s skin”. A convert to sake, especially from Niigata, he personally selected the seven bottles available in his Paris restaurant. Depending on their taste, whether it’s drier or sweeter, Guy Martin readily pairs them with foie gras, carpaccio of scallops, oysters, even with desserts, whether they’re made with chocolate, apples or citrus fruits. “I strongly believe we’ll soon be talking about vintage sake in the same way we talk about wine. And it will be a worldwide phenomenon,” he maintains.

Odaira Shunji agrees. In his opinion, the future of sake lies in the quest for the highest quality. This is the reason he’s about to go into partnership with Bordeaux University, and since last spring, Niigata University has a sake speciality as part of its diploma course. “We want to create a model for the study of sake the same as they have in France for wine. Specialisation will allow us to develop the character of this exceptional product,” he assures us. However, it’s not a question of excessive sales growth. “Niigata has many breweries, but it’s all about the small family firms who only produce quite small quantities: above all, it’s about how to master and pass on these complex production methods, which will allow us to achieve an evermore perfect taste. Light, mild and rich at the same time.” The ultimate alliance between rice and water.

FROM TOKYO, take the Joetsu Shinkansen from either Tokyo or Ueno station. The journey takes between 90 and 120 minutes, depending on the train you catch. Several departures every day. THE IMAYO TSUKASA BREWERY organises free guided tours daily (every hour from 09.00). It’s situated 15 minutes on foot from the railway station (Bandai exit).
1-1 Kagamigaoka Chuo-ku Niigata 950-0074
http://imayotsukasa.co.jp/en/

No53 Ogasawara: The treasure archipelago

No38 [Travel] Samurai spirit, are you there?

No35 [Travel] The hidden face of Yokohama

No13 [Travel] High up on the sacred mountain