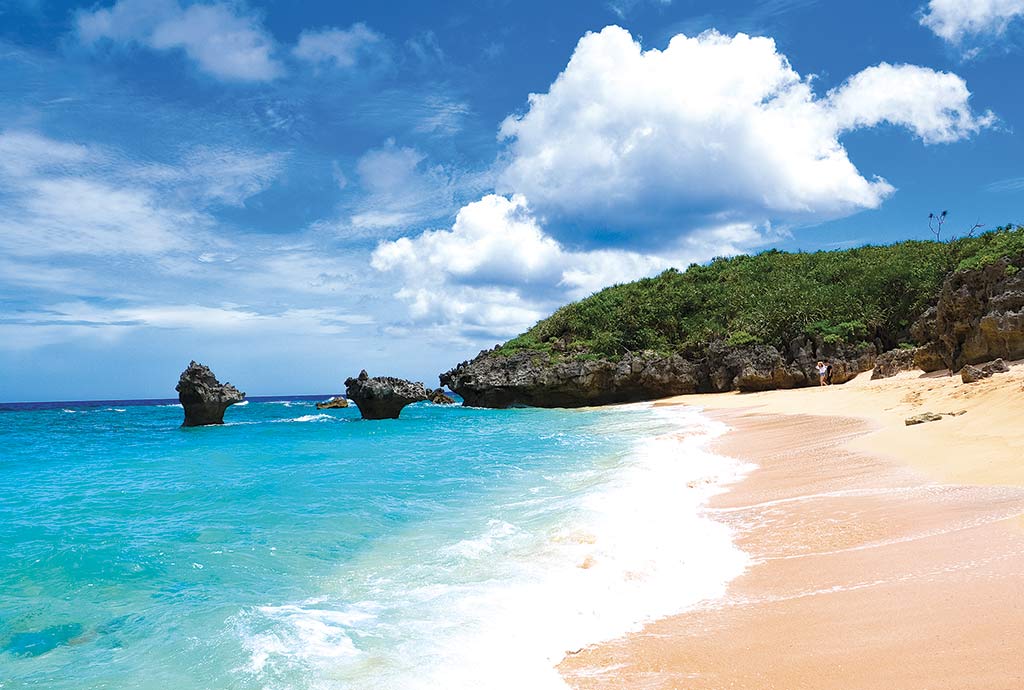 Our reporter followed the famous artery from south to north to discover its secrets.

Travelling through Okinawa by car is an experience not to be missed if you wish to discover not only the landscape but also the history of this island, the largest in the archipelago. From Naha, National Route 58 follows the coast from south to north, passing historic remains, heavenly beaches and ancient forests. It’s the route I take to get to the Motobu Peninsular, 80 kilometers to the north west of the island and the starting point to exploring the northern wilderness of Okinawa, registered on the Unesco World Heritage List in 2021.

At first, after leaving Naha, you’re greeted by the surprising sight of military depots, burger outlets and shopping centres with bilingual signs. A legacy of the Second World War, the island of Okinawa is still inextricably linked with its ten American bases. Around 30,000 GIs are stationed there, or 75% of the US forces in Japan. Ospreys are lined up behind the barbed wire fences of the vast Kadena Airforce Base, right in the centre of the town of Chatan, population 28,000. These impressive military transport aircraft weighing over 20 tonnes regularly fly over the island.

Under the palm trees, tattooed soldiers can be seen jogging in the late afternoon. However, in contrast to Chatan, the streets of the Yomitan Peninsula are lined with shuttered restaurants and bars. Opened at the height of the Vietnam War, most of the American villages in Okinawa have withered away. Here, only Café Malibu, with a Statue of Liberty on its roof, appears to be open. Inside, surrounded by black and white photos of Hollywood stars, an American is eating a hamburger while enjoying the last rays of the sun on Malibu beach. Dozens of military camps are scattered around the island, but Kadena is the last base on the west coast.

We arrive in Onnason. The road travels through beautiful coastal scenery to the large town of Nago, lined with tourist hotels. I leave Route 58 to travel further into the Motobu Peninsular and unload my luggage at the Motel on the Beach Lue after dark. With modern rooms with terraces overlooking the beach, this small hotel is not without charm, but the owner tells me that for some years now the beach has not been what it was. In fact, trawlers dig up the sand day and night to extract gravel. You have to go to the northern side of the peninsula to really enjoy a taste of the tropics. Suddenly, there’s far less traffic. Accompanied by the melodious sounds of the uguisu (bush warbler), we enter Nakijin-son and the village of Nakijin, overlooked by an imposing fortress. Listed as one of the nine World Heritage sites in Okinawa, Nakijin Castle is an excellent place to start understanding the history of this region, which was once part of the Ryukyu Archipelago with close links to China. “The Ryukyu were independent from central Japan until the beginning of the 17th century and consisted of three kingdoms, the south, the centre and the north. Nakijin Castle was the gateway to the Northern Kingdom,” explains a guide, Yoko Junko, while climbing over the ancient stones towards the castle. Built at the end of the 12th century by a ruler called Han Anchi, the castle is now in ruins, but what remains is an imposing 1.5 kilometers long wall and a breathtaking view of the jungle and the South China Sea. “The King of the North controlled all of present-day Motobu and dealt directly with China. In 1422 the castle was invaded. Han Anchi slashed this stone with his sword before committing suicide,” continues the guide showing us the mark of the legendary impact. “The sword was found in the river. It’s exhibited in Naha. Do you realise? This river is down below in the jungle, it’s been there for 5,000 years!” We bend our heads to catch the sound of the water rippling under the dense canopy. “The castle then became the residence for one of the kingdom’s administrators until the Satsuma invasion in 1609. Then the castle burned down, but the inhabitants of Nakijin continued to visit and honour the sacred places inside the fortress,” adds the guide, and shows us an utaki, a sacred spot around a stone where ancestors and the deities of nature are honoured. Animist belief is still alive in the Ryukyu Islands, and utaki ceremonies are held by noro (shaman priestesses). The Nakijin Museum of Culture and History at the castle’s entrance displays photos of the rituals that shape the life of each Okinawan village. “During the war, the people of Nakijin wanted to prevent the Americans from entering the fortress compound with their tanks and built a stone staircase to replace the road!” 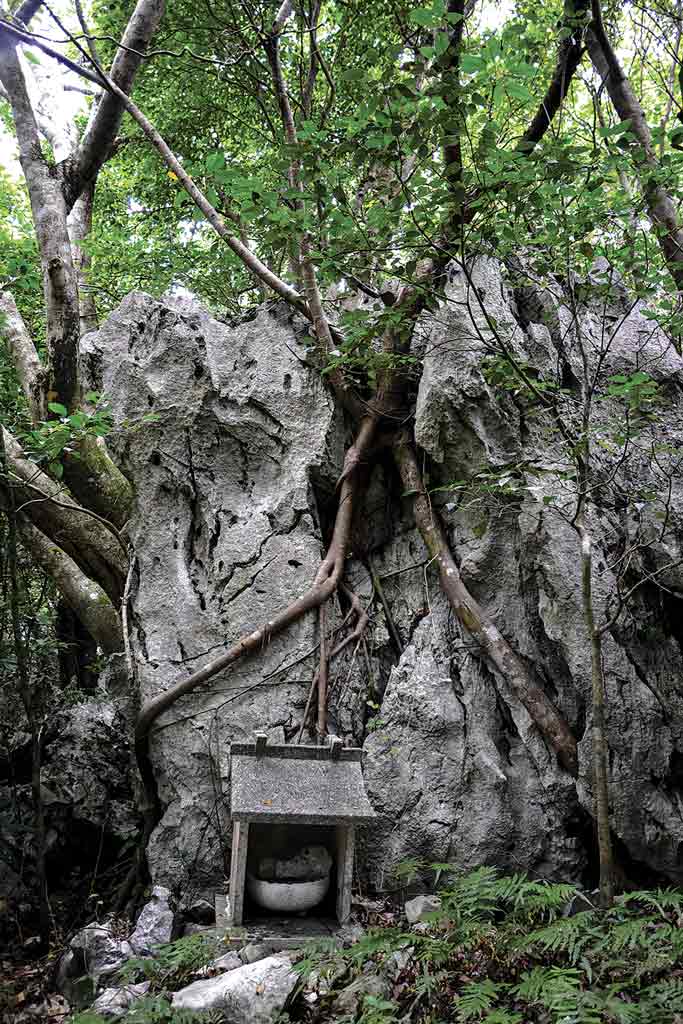 The sacred site of Daisekirinzan forest in Yanbaru National Park.

The sacred site of Daisekirinzan forest in Yanbaru National Park.

In 1945, Okinawa was the setting for the final act in the Pacific War. Japanese and Americans fought and killed each other for 80 days. 150,000 civilians lost their lives. The guide watches the sun setting over the jungle before hurrying down. After the Battle of Okinawa, the castle ramparts became home to numerous habu, highly venomous rattlesnakes endemic to the Ryukyu Islands. They come out at dusk to protect the forests and old stones from intruders. The beautiful road passes through banana fields to the village of Nakijin with a population of 9,000. From the eastern tip of the peninsula, ferries depart for the more remote islands of Izenajima and Iheya-jima. However, two of them are accessible by road. A first bridge spans the sea to the small island of Yagaji-jima, covered with rice fields and beaches. At the entrance of the second bridge, which in turn connects to Kori-jima Is- land, the view over the bay with its jungle canopy plunging down towards the clear waters of the estuary is spectacular. The large bridge leads to the large white sandy beach of Kori and the harbour lined with cafes and restaurants. The road winds alongside the sugar cane fields to the northern end of the island where you’ll find Heart Rock Beach, known as a rendezvous for lovers. Rising out of the turquoise water, two heart shaped rocks face one another. The surrounding area is equally splendid, with beautiful coves shaded by kewra palms (fragrant screw pines).

There are no facilities, except for a few beautiful traditional red-roofed guesthouses, which offer luxury accommodation situated around flowered patios and spas. On the way to the port, I stop at the Shirasa Inn to sample the Ryukyu speciality, champuru, a stir-fried dish with tofu, eggs and ham, accompanied by seaweed in rice vinegar and bitter goya cucumbers. The owner is one of the 300 local inhabitants of the island and laments the lack of visitors. Okinawa, like the rest of Japan, has been closed to tourists for almost two years. 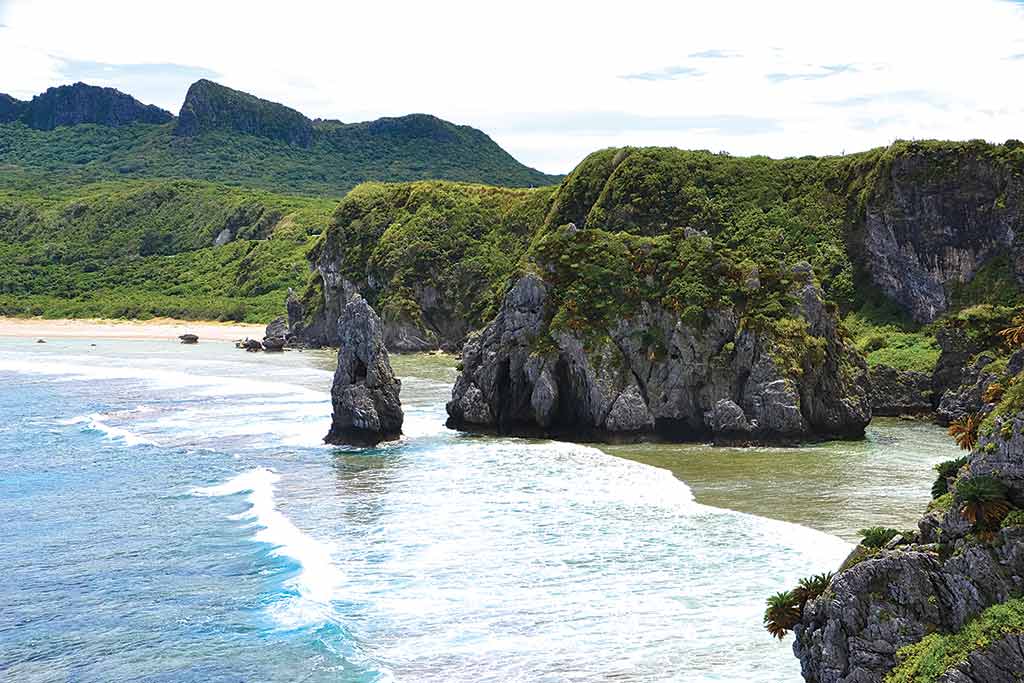 Cape Hedo at the northern tip of Okinawa Island.

Returning to Nakajin at sunset, its good to relax on beautiful Nagahama Beach, whose calm waters are ideal for swimming and kayaking. At low tide, fishermen walk to the reef to collect shell- fish. Some of the local guesthouses have terraces overlooking the sea like the Nakijinson Resort and Spa, which offers aromatherapy sessions in a stunning setting. Several restaurants also offer the local speciality, Motobu beef, fed with local brewers’ yeast from the equally well-known Orion beer!

I take Route 58 towards Cape Hedo, which marks the northern end of the island. In the village of Ogimi, local workshops showcase the handicraft of bashofu, a textile woven from the stems of banana trees, which gives an inimitable colour and elegance to the kimono of the Ryukyu Islands. Lightweight and sheer, bashofu is ideal for a tropical climate. Ogimi is also known as the village of longevity! An organisation has even devised an opportunity for eco-tourism with visits to locals’ homes to discover the secrets of the village’s centenarians. They’ll tell you to eat a lot of shikuwasa, a small tangy fruit between a lemon and a tangerine that contains anti-oxidants. Nature becomes more abundant as we progress towards the less-populated areas of Okinawa. Straddling Ogimi, Kunigami and Higashi is Yanbaru National Park, listed as a UNESCO World Heritage Site in 2021. A vast, untouched expanse, it’s necessary (unfortunately) to pay to travel through Daisekirinzan Park in order to survey it without the risk of getting lost. With its four themed tours and information boards, it resembles a theme park in contrast to the unspoilt countryside. But it’s worth it. From the very first step, you’ll be amazed by the beauty of this forest of stones and thousand-year-old trees. Daisekirinzan (lit. Big Stone Woods Mountain) refers to a forest that was formed in the sea 250 million years ago in the Paleozoic era. The limestone rocks are actually corals that have been eroded by wind and rain to form extraordinary shapes, which the park does not hesitate to classify as “Godzilla”, “Camel” or even “Picasso”! Many animist sites can still be seen around the menhir-like rocks. The Ryukyu natives call this sacred forest “Ashimui”, whose four emblematic peaks were venerated by the kings of the Ryukyu dynasty. From these four summits, you can admire the view over the 210 square kilometres of subtropical forest covered with impressive banyan trees and gigantic cycas plants. In addition to endemic bird species such as the woodpecker and the Okinawa rail, Yanbaru has a mangrove in its southern part. During the Showa era (1926-1989), the forest supplied the kingdom with firewood and timber for building ships. At present, the eastern part of this forest is still home to what has been, since 1958, the largest training site for the US Marines stationed on the island, some 7,800 ha of “jungle training area”. Since the inscription of the site on the Unesco World Heritage List, the debate has reopened about how this unique ecosystem can coexist with the noise pollution from the military bases.

National Route 58 finally leads me to Cape Hedo, the northernmost point of Okinawa, from where I can see Yoron Island. The ocean crashes against the coral reefs in shades of blue and green. On this windswept coastline stands a monument commemorating Okinawa’s transfer back to Japan in 1972. This year, as the archipel- ago celebrates the 50th anniversary of this event, many Yanbaru residents are praying more than ever for the return of their precious forest. As if in response, the sun illuminates the four peaks of Ashimui.

Avoid the motorway and take National Route 58, which goes up to Cape Hedo (120 km). It splits into two roads in places, one of which winds along the coast. Magnificent scenery guaranteed!

Nakijinson Resort and Spa (https://iyashinakijin.com) Three Japanese-style bungalows with fridge and kitchenette.
Musubiya (https://musubiya.co) Perfect hostel for small budgets with single rooms or simple dormitories. The garden has a view over the sea with a large terrace ideal for barbecues. Shared kitchen and friendly atmosphere.