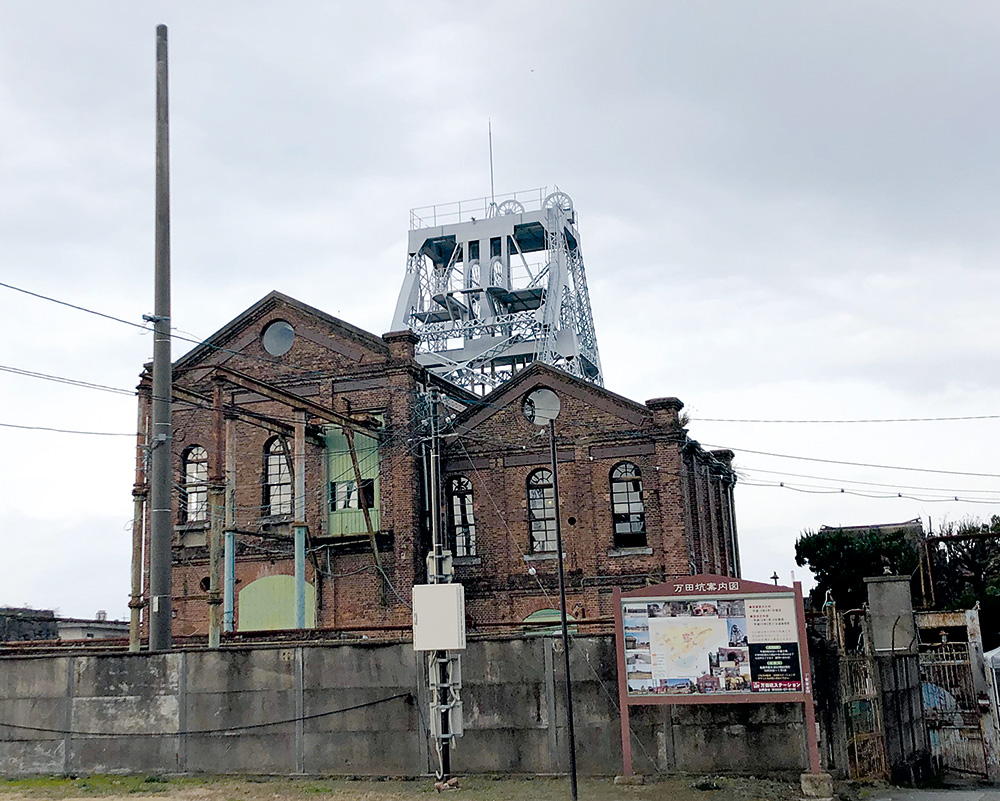 Built with bricks imported from Great Britain, these buildings are 110 years old.

The region took an active part in the economic development of the country at the turn of the 20th century.

For most tourists, Kumamoto Prefecture is known for its nature, its magnificent Kumamoto Castle and for Kumamon, the mascot created in 2010 to promote this region on the occasion of opening of the highspeed Shinkansen line on the island of Kyushu (See Zoom Japan no.23, September 2014), whose fame has spread beyond the region and even Japan. However, Kumamoto owes its reputation in part to its industrial history, which has left numerous traces, sometimes tragic as in Minamata, but it has never faded in the memory of a population proud of having played a part in the country’s development.

Minamata celebrates 130 years of existence as an administrative body this April, and is nowadays best known for the illness that some of its inhabitants fell victim to following the dumping of heavy metals into the sea by the Chisso factory, founded in 1932. Today, the industrial company responsible for the poisoning in more than 13,000 identified cases, while around a further 25,000 are still waiting for their cases to be verified, is still there. It is located opposite Minamata railway station, and is symbolic of a period of industrialisation in Japan during which only economic results counted. This meant a very heavy price was paid, as demonstrated in the photos of the victims taken by the Japanese Kuwabara Shisei and the American William Eugene Smith, and in the moving accounts by the late lamented Ishimure Michiko, which eventually led to Japan reviewing its industrial policy. It took a tragedy like Minamata for people to become aware of the situation. The consequences of this low point in local history have still not been completely sorted out, and many are not prepared to forget even though the authorities now boast about having decontaminated the affected places.

Further north in the prefecture, in Arao, we don’t want to forget the industrial past of the city. It’s not just the memory of the pollution, from which they also suffered, but the fact that the city played an active part in the growth of the country mainly thanks to coal. When visitors arrive at Arao station, they are greeted by posters announcing the registration of the Manda coal mine (Mandako, 200-2 Haramanda, Arao. Open from 09.30 to 17.00, closed Mondays, 410 yen) as a Unesco World Heritage site along with several other industrial sites from the Meiji Industrial Revolution. The Manda mine, part of the Miike coal mine, which lies mainly in the neighbouring prefecture of Fukuoka, stopped producing coal in 1951, but continued to be used by the Mitsui group until 1997. Some of its buildings testify to the crucial role played by the region in the country’s development at the turn of the 20th century. Unlike the city of Omuta in Fukuoka Prefecture, where the first pits were opened in the 15th century, the Manda mine was fitted out in 1899 and started to produce coal three years later, that’s to say in the 35th year of the Meiji era. When you approach it, you quickly understand why this place was chosen by Unesco to feature on its Heritage list. Despite its lack of maintenance before it was listed, it has a certain powerful presence. Built of red-brick imported from Great Britain, its buildings recall the industrial influence of Europe. They are testament to a period when the region lived to the rhythm of coal production.The buildings housed the machinery that allowed miners to descend to a depth of 268 metres, to the bottom of two pits, to extract the black nuggets so important to the transformation of the country. Volunteer guides, often former employees, accompany visitors on a descent lasting several minutes into the world of Japanese coal mining. As Natsume Soseki wrote, in 1908, in The Miner (Kofu, trad. by Jay Rubin, pub. Aardvark Bureau), “among workers, the miner was the most cruelly exploited”. For a long time, women, children and prisoners were made to work down the mines before the company decided to put an end to the practice after the First World War in favour of a more skilled workforce.

A sign of this change was the construction of a Shinto shrine at the entrance of the site in 1916. The Yama no kami saishi shisetsu (a ceremonial structure for the mountain gods) was built here so that the miners could pray for the site’s protection. Until then, safety had not been a priority, especially as the mine owners could sack workers at will. Listening to the guides who lived through the last period of local coal production, you come to realise that miners gradually became the spokesmen for workers’ protests, especially after the Second World War. They will tell all those who are interested about the widespread strikes in 1959 following mass layoffs instigated by the management due to the recession in the coal industry.

Their energy is boundless, just like Sobu Masayoshi’s, who sells ekiben (lunch boxes sold in railway stations), in Hitoyoshi station a town in the south of Kumamoto Prefecture. At 75 years of age, he’s one of the last to work in this trade and he never misses a train departure from this city, which used to be one of the main railway termini in the country. In the last century, a quarter of its population worked on the railway and there are many remnants recalling the time when Hitoyoshi was a most important railway hub. Mr Sobu, tall and slim and always smiling, remembers the time when powerful steam-engines would sound their whistles and you could follow their progress along the Kumagawa River thanks to their plumes of smoke. He is again experiencing the excitement caused by these machines thanks to the launch of the SL Hitoyoshi (www.jrkyushu.co.jp/english/train/sl.html), a tourist train between Kumamoto and Hitoyoshi, pulled by the locomotive 58654 which dates back to 1922, between Kumamoto and Hitoyoshi. It is an unforgettable journey of 2.5 hours in the heart of the mountainous landscapes of Kumamoto while enjoying a kurimeshi ekiben (rice with chestnuts), a speciality lovingly served by the energetic Mr Sobu.