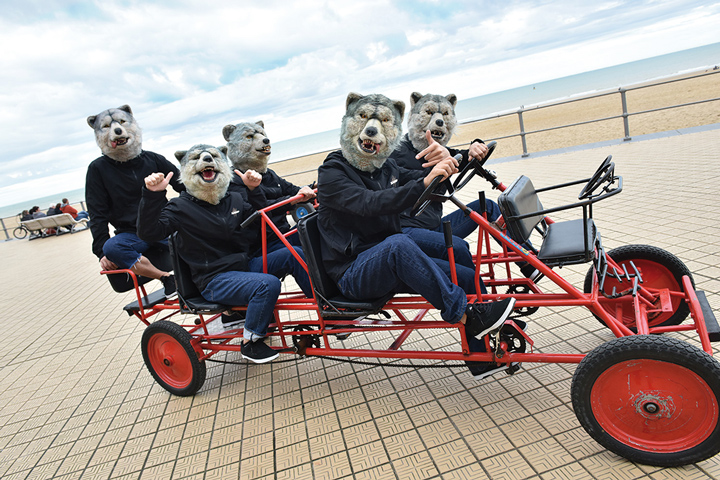 We spoke to the leader of man with a mission in advance of their performance in London on June 22nd.

According to the story, five half-man, half-wolf creatures emerged from their deep-frozen state in 2010 due to global warming, and after some travelling around ended up in Japan where they formed a rock band called Man with a Mission. Their music has roots in hard rock and heavy metal, but they are not afraid to mix it with EDM, punk and hip-hop (one of them is a DJ), resulting in a sort of progressive rock for the new millennium. Their rapid ascent on the international stage has culminated (so far) with the release of last year’s album The World’s on Fire, which sold 200,000 copies in fewer than two months. Their music seems to be a perfect match for animation as they have contributed theme songs to such works as Nanatsu no Taizai (Seven Deadly Sins), Log Horizon and Mobile Suit Gundam: Iron- Blooded Orphans. Zoom Japan talked to guitarist and vocalist, Jean-Ken Johnny, about their music and upcoming European tour.

So when you escaped from antarctica you made your way to Japan and began to play as a band. What was it like in the beginning?
Jean-Ken Johnny :We were based in Shibuya at first. We just took part in an event some guy organized. That was the first time we played in front of people here. As you can imagine everybody was like: what the heck are these guys? Obviously, whenever people see something different they’re curious about it, but as soon as we played they were just into what we were doing.

How is the music scene here?
J.K. J. :The band scene in Japan is really strong, even these days. Internationally, rock music is probably not as powerful as it used to be, but in Japan the bands are very aggressive and focused on what they do. We have lots of friends: 10- Feet, Dragon Ash… One of my favourite bands is Hi-Standard; they were one of our main influences. There are just too many bands to mention.

In Europe, the Big Bad Wolf has become a generic archetype of a menacing predatory antagonist that appears in several fables and cautionary tales. How about Japan?

J.K. J. :Our wolf-related folklore actually comes from overseas. We have taken such stories as The Three Little Pigs and Little Red Riding Hood and made them ours. So I guess wolves are seen as the bad guys in Japan too. On the other hand people here treat them as some sort of divine creatures, even though you can’t find them in Japan anymore [the last Japanese wolf was killed in 1905 – JD]. I guess the only places you can see them now are zoos in Hokkaido.

Listening to your songs, one can pick up many different styles and influences, and I’m sure each member has different tastes. I’m curious about your creative process. How do you write your songs?

J.K. J. :The main composers in the band are Kamikaze Boy, the bass player, and me. We usually start with the music, and add the lyrics later. Each one of us may come up with a basic idea, a particular chord or a melody we start humming to ourselves. Then we play it to the rest of the band and start to work on it together. I believe our style and approach to musicmaking is mainly based on the kind of rock that was popular during the 90s or early 2000s, but that’s just the base on which we build our music. There’s a lot of rapping, but in the end we love a catchy melody. We always strive to add new, more contemporary elements. Today’s We spoke to the leader of man with a mission in advance of their performance in London on June 22nd. MUSIC Watch out! Wolves are out! technology makes it very easy to work on new musical ideas; now you can even make music on an iPhone.

How about your lyrics? are you inspired by certain subjects in particular?

J.K. J. :We write the lyrics depending on the musical mood we have developed for each song. I’d say that most of our songs are about trying to figure out who you are and what your place is in this world. We are curious about human nature. I believe that everybody has his own problems, and that’s definitely one thing all of us have in common and can share with other people. So we’re not really into love songs or anything like that. Sometimes we may pick an idea from what we read, or movies. We try to decide what kind of subject or message would reach everybody.

Do you have any favourite films or film directors?

J.K. J. :Martin Scorsese is one of the best. I also like Richard Curtis’ comedies – About Time, Love Actually… He has a fantastic blackhumour touch.

According to your history, the world’s leaders had you “work in the shadows of history” and made you do many evil things. Now you are based in Japan. What do you think about recent developments in Japanese politics and society? Like changing the constitution?

J.K. J. : I’m really interested in these things. Of course, it’s a really hard subject to talk about. We definitely need to find a solution to domestic and international problems, but it’s often hard to come up with something that satisfies everybody. We are all trying to make the world better, but you need to recognize and understand what other people want. This problem is common to every country, of course. As for Japan, I’m not sure this country is going in the right direction. That said, people are always complaining about the government, but at the same time these are the politicians we have elected.

In august you are playing Otakuthon in Canada. Several of your songs have been used in anime works. How do these collaborations work?

J.K. J. : We are usually asked to compose original songs for these anime projects. We always work in close collaboration with the anime creators, which helps a lot because when you are writing a song by yourself you’re not comparing ideas with other people, but when we compose for animation we have to keep in mind their story and themes, and that stimulates our imagination.

Are you into manga or anime?

J.K. J. : I’m a total otaku. Just to name the main ones, I love Tezuka Ozamu, who’s a real god to us, but also Otomo Katsuhiro and Ghost in the Shell’s Shirow Masamune. It’s really great to see that Japanese culture is breaking through and being appreciated everywhere in the world. I’m really a wolf – I’m not from Japan – but I’m happy for this country that its culture is loved abroad.

How about the many collaborations you’ve had with other musicians? It seems a lot of them come about by chance.

J.K. J. : Well, in Japan, of course, it’s a lot easier not only because we live in the same place, but we may have known each other for a long time and know each other’s work well. On the other hand, collaborating with international artists often means working with people we like and respect but don’t know that well, so it’s a different process, as our main purpose is making new sounds with them and exploring new ways to create a song. So, in a sense, it’s even more exciting.

In June you’re touring Europe. Of course, this is not the first time you’ve played abroad. Have you noticed any differences between fans in Japan and in other countries?

J.K. J. : Of course, every music fan around the world likes to go crazy and have a good time. I guess the main difference is how quickly they react to our performances. In Japan, they are more guarded at first; it takes longer to get going. But if they dig you, they’ll come to you after the show and tell you how much they enjoyed the concert, and become very loyal fans. In Europe, on the other hand, they’re pretty quick. It only takes them one song to go crazy, or even just the first verse of the first song. I think it’s because people have a clear idea about what they like and are more direct in expressing their feelings. They like to declare their pride in loving heavy metal or whatever genre they’re into. In Japan, as you know, people are not so outspoken.

I guess it must be hard to perform on stage as a big-headed wolf. Don’t you ever feel like fainting on stage?

J.K. J. :Well, I guess you can tell I’m very hot even now, but once you’re on stage you just forget about everything.