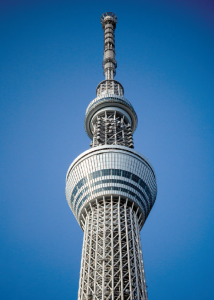 The opening of the Tokyo Sky Tree on the eastern side of the Japanese capital marks the start of a new era.

Without doubt, Tokyo is experiencing a revolution. Admittedly it is a peaceful one, but still a revolution, that will change the geographical balance of the capital. This revolution is related to a great extent to the construction of the Tokyo Sky Tree, a huge communications tower in the Oshiage area of Sumida district in the east of the city. It’s been on everyone’s lips since construction started in July 2008. Some consider it a cultural revolution, because for decades Tokyo has always followed the rhythm of those areas to west of the Imperial Palace, the heart of the city. Nishi Azabu, Roppongi, Minami Aoyama, Nakameguro, Ebisu, Shinjuku, Harajuku and Shibuya were some of the most vibrant areas of Tokyo, where most post-war mass movements had their roots. Examples include the violent student protest in Shinjuku of the late 60s, and the dozens of young people who gathered around Yoyogi Park ten years later to dance to the sound of ghetto blasters, or even the proliferation of fashion shops in the luxurious area of Aoyama. But it is precisely that luxury, combined with unaffordable property prices, that is driving an increasing number of people away from these places that no longer fit in with Japan at the start of the 21st century. Luxury brands and free-flowing money, have given way to a new awareness of the limits to this post-war model for growth, of which the Tokyo Tower was the symbol. For some years now, Japan has been looking for a way of being more environmentally-friendly and taking better care of the population. By naming the tower ‘Tokyo Sky Tree’, the project’s promoters are making a strong symbolic point. The sky and the tree embody the current state of mind, and an increasing number of people spend time in that part of the city in order to soak in this sense of change and hope.

Japan’s main newspaper, Yomiuri Shimbun, got the idea. It opened an office on the first floor of the building while it was still unfinished, and it regularly publishes articles describing the atmosphere in that part of the city, as well as the changes it is going through. An example of this cultural turn-around on the eastern side of the city can be seen in the Bakurocho area, which has been dominated by wholesale textile dealers for a very long time. Over the past few months, Bakurocho has changed its appearance with the opening of galleries and places that attract creative people and those who want to be in direct contact with them. The One Drop Cafe (www.onedrop-cafe.com) and Fukumori (http://fuku-mori.jp), multi purpose locations that offer exhibitions, workshops, and food, are two of the most representative places of this movement. North of Bakurocho is Okachimachi, a place where many young creative people gather, whose characteristic aim is to achieve simplicity. Syuro (www.syuro.info) and Woodwork (www.woodwork.co.jp) create objects that are reminders of past crafts. In a way it is the Shitamachi’s (meaning ‘lower city’) return match. This name was given to the old part of Edo at the bottom of the castle that had lost its popularity to the areas in the west. By moving eastwards, Tokyo’s population and especially the young, are turning their backs on the past fifty years of Japan’s history in an attempt to find a new impetus in the traditional values of these areas that are at some distance from political and economic power. The revival of rakugo (a style of comedy monologue that goes back to the 17th century) is interesting from that point of view. Nishizawa Ryue, the founding architect of SANAA with Sejima Kazuyo, explained why he decided to move their office to Tatsumi, a quarter in the south east of the capital. The absence of rakugo shows in Shibuya and Ebisu, and the fact they are more frequent on the eastern side, partly explain his decision. It may seem merely anecdotal, but it perfectly illustrates well the state of mind of this young (20-40 years old) generation, and their search for new points of reference. There is no doubt that they will find a very powerful one in the Tokyo Sky Tree, towering as it does to a height of 634 metres. 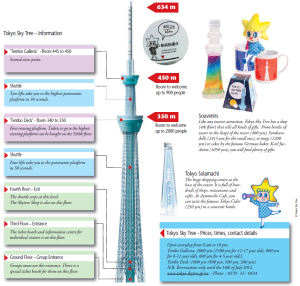