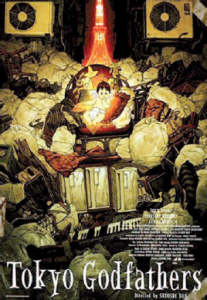 A tower within a tower

Tokyo Tower was built during the years of strong economic growth in Japan. Now that the country is in crisis, it is looking for a new beacon of hope. It is called Tokyo Sky Tree.

Built as a huge television aerial, the Tokyo Tower ended up representing far more.  On the fiftieth anniversary of the completion of the Tokyo Tower, the company responsible for its management opened its website to comments, asking visitors to share memories relating to the building. “My encounter with the Tokyo Tower was a life-marking event”, one of them wrote. It may seem a little exaggerated but this account is representative of the thousands of messages that were published on the website. The tower’s completion coincided with the country’s entry into a new era. Japan was just coming out of its post-war period and could finally look forward to a radiant future with the Tokyo Tower as its main landmark. With a height of 1092 feet, it embodied the ‘dreams and hopes’ of a people who, barely fifteen years previously, had been living in misery after years of war in Asia and in the Pacific. The tower was built for the installation of television antennae, as there was now a growing market with an income high enough to afford television sets. In the mid fifties the Japanese wished to possess ‘three sacred treasures’ (sanshu no jingi): a fridge, a washing machine, and a television. The first channel to broadcast was NHK in February of 1953. The publicly owned corporation was soon joined by Nippon Television in August of that same year, and became the first private television channel. One of its first programmes was a live broadcast of a baseball game between the Yomiuri Giants and their biggest rivals the Hanshin Tigers. To get good reception it is essential to have a very tall building on which to install the antennae. At that time there were three towers in Tokyo between 492 and 531 feet high, which belonged to the main channels (NHK, Nippon TV and TBS). In order to avoid constructing more the authorities decided to build a tower dedicated solely to broadcasting. It was partly built with steel recycled from the tanks that Japan produced for the American Army during the Korean War (1950-1953). When the huge tower was completed it dominated the Japanese capital city. It was the only building that could be seen from a great distance, and for millions it became the symbol of a new Japan a country self-confident enough to return to the forefront of the international scene without needing to go to war. This mindset is also revealed in the movie Always – San chome no yuhi [Sunset on Third Street], released in 2005. Inspired by a manga with the same title, it describes the lives of people living in a modest area of Tokyo at the time when the tower is being built. As the construction progresses you can feel the growing optimism of the population as it discovers the possibility that tomorrow may be a better day. The last scene unfolds with the sun setting over the capital city. A family looks towards the huge tower far off in the city. “It’s beautiful”, says the mother. “Yes it is”, says her husband. “And of course, it still will be tomorrow, the day after that, and for another fifty years”, adds their son. Then the camera pans towards the city, enveloped in orange light, symbolizing a calm filled with promises for the future. Over the following decades Japan’s development accelerated. The Tokyo Tower shone like a lucky star throughout that period, and the poster for Tokyo Godfathers (2003), a movie by Kon Satoshi, illustrates this very well. There is a child (who resembles Jesus) under the protective light of the tower. During all those years the Tokyo Tower appeared to resonate to the rhythm of the country and it seemed as though it would remain that way forever. But the crisis that followed the burst of the financial bubble has changed that situation. The tower, symbol of strong years of growth, lost much of its magnificence. Writer Lily Franky gives a good account of this change in his novel Tokyo tawa okan to boku, tokidoki, otan [Tokyo Tower, mum and me, and sometimes dad], published in Japan in 2005. “Looking out from the top of Tokyo Tower, one notices something. You can’t see it when you’re down in the city, but there are many graves in Tokyo. (…) This city is a cemetery of dreams, hopes, disappointment, sorrow”. It is now time to turn that page as with “the development of digital television, Tokyo Tower does not suit our needs anymore”, he adds. The authorities must have been aware of this when they decided to build the Tokyo Sky Tree, a 2080 feet high tower, with the principal aim of broadcasting digital signals. It is situated on the eastern side of the capital, and its recent inauguration has sidelined, forever, the importance of Tokyo Tower. It now belongs to those glorious years so many Japanese are nostalgic about (those born between 1950 and 1970). But a change of symbol was needed, as witnessed by the current craze for Tokyo Sky Tree.