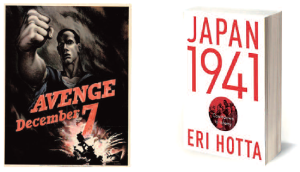 In her latest book, Eri Hotta examines what led Japan to join a war it knew in advance was lost.

Historian John Dower recalls: “Pearl Harbour remains the greatest symbol of victimization for the US. When Al-Qaida launched their attack against the World Trade Centre on September the 11th 2001, the Americans immediately compared it to Pearl Harbour, not only because it was a surprise, but also because it was carried out against an innocent nation for no reason at all”. Sixty-one years after the 7th of December 1941 and, despite the fact that Japan is undoubtedly one of the most loyal allies of the US, after the attacks on New York and Washington one of the first things to be recalled was Japan’s “treachery” at Pearl Harbour. Comparisons were even made between the kamikaze squadrons during the War and the terrorists who flew into the Twin Towers and the Pentagon. In short, the abomination that the United States was a victim of on that wintery day in 1941 remains alive in the sense that the country still consideres itself an innocent victim. In Japan 1941, Countdown to Infamy, Eri Hotta’s interest is in what led the Japanese to take part in a war that many considered to be madness. To underline the extreme complexity of the situation in Japan at that time, she writes, “throughout the course of the government’s final discussions about going to war, Tojo was acutely aware of the small possibility of Japanese victory”. A few years after the conflict, philosopher Masao Murayama wrote: “trembling at the possibility of failure, [the leaders] still thrust their way forward with their hands over their eyes. If we ask, “did they want war?” the answer is yes; and if we ask, “Did they want to avoid war?” the answer is still yes. Though wanting war, they tried to avoid it, though wanting to avoid it, they deliberately chose the path that led to it”. To understand this state of mind, the author of the outstanding work: Pan-Asianism and Japan’s War, 1931-45 (2007) offers a detailed analysis of the various political and philosophical currents that were streaming through Japan in the months prior to the attack against Pearl Harbour. This book’s originality stems from how it explores the cultural context in which those who chose to lead their country on the road to war found themselves. She tells of how when the reports of the attack’s success came in on the 8th of December 1941, the Japanese people greeted it as a great liberation. “There was very little of the famous Japanese reserve to be seen. Strangers congratulated each other on the street.
Travelling on an overcrowded train that evening, the diarist Nagai Kafu observed ‘a fellow exclaiming excitedly,’ apparently unable to contain how thrilled he was about the day’s news”. Intellectuals celebrated as well. One of the most distinguished poets of twentieth-century Japan, Saito Mokichi, fifty-nine at the time, recorded in his diary that: ‘The red blood of my old age is now bursting with life! … Hawaii has been attacked!’”. When reading Eri Hotta’s book you develop an understanding of what provoked such joy when the probability of winning the final victory was still very slight. She reveals the leaders’ trail of thought: that war was the only possible way out, never seeking to excuse or defend their position but expertly analysing it. She shows that the caricatured portraits of certain Japanese leaders that still prevail in the story as told in American history textbooks have nothing to do with reality. Prime minister Tojo should not perhaps be considered the bloodthirsty dictator as described in American propaganda or Tintin’s adventures in Japan. The author portrays the main protagonists with a much more objective and realistic approach leaving aside the events that took place during the course of the war. She places them in their own epoch, and that successfully throws a new light on the way we can view the war. Eri Hotta has produced a very useful book. It marks a turning point in the way we perceive the war in the Pacific and Japan’s responsibility in how it started.