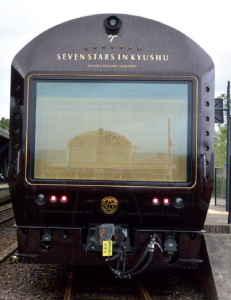 Japan has had a new train since the 15th of October and it is a unique way of discovering regions that were little known up until now.

In 2012, Japan welcomed eight million foreign tourists. The number is growing but it is still far from the current government’s hope for twenty million by 2020, the year during which Tokyo will be hosting the Olympic Games. By that time, the work to link the capital to Nagoya with a 500-km/h train will have progressed quite a bit. Nevertheless, as 80% of the track will be underground, those who dream of catching this technological wonder will be unable to experience and appreciate some of the most beautiful landscapes on offer in the land of the rising sun. However, the new line will give speedy access to high quality services and become one of the strongest assets for Japan’s tourist industry. Until then, foreign tourists can experience a train journey that is very different but just as unique as the one that will enter into service in 2027. This one has nothing to do with magnetic levitation or high speeds though. On the contrary, it is based on the concept of leisurely savouring the passing of time and appreciating the pleasure of the journey itself.

This train is called Nanatsuboshi in Kyushu (Seven Stars in Kyushu) and its promoters wish to introduce the traveller to a “new way of life”. They consider that the pleasure of travelling for its own sake and appreciating every moment has been lost somewhere in our hectic modern world. Nanatsuboshi in Kyushu is a “cruise-train”. In other words, this new train invites us to explore beautiful landscapes and an exceptional setting, just as one would on a fine ocean cruise.

Built by designer Motooka Eiji, this classy machine is a work of art on rails, its mission is to transport passengers into an elegant world of luxury and delight. The design certainly includes a lot of wood, whether in the suites, in the restaurant or the saloon cars. The concept is for the traveller leave everyday life behind and there are two options available for those who want to sample an exquisite getaway on rails. One can either embark for a weekend or book a sojourn for a longer period. Of course, the prices are as indulgent as the train: from 155,000 yen [£984] to 566,000 yen [£3,593] depending on the itinerary and the cabin, although the rarity justifies the price. There are only 14 suites, including two labelled as “luxury suites” that are furnished tastefully and include bathrooms that are comparable to some in the best hotels.
The exceptionally comfortable rooms offer a place from which to watch the scenery passing by. The lucky person staying in the Luxury Suite A even has a bay window to enjoy when the carriage is at the back of the train. The saloon car also boasts a wonderful window from which to enjoy the view. This carriage has an important role on the Nanatsuboshi in Kyushu. Like the saloons on transatlantic ships that provide a place to meet people and make connections during a long crossing, the saloon car aims to revive this experience and facilitate communication between the passengers. Meeting people in a warm and inviting atmosphere has never been easier and everything is thought out so as to encourage the passengers to forget about time. Food is always a good way of starting a conversation and the food on offer on this luxury train is simply wonderful.

A large variety of local products are used to serve dishes that are as good as they look. Whether served onboard the train or at a traditional hostel (ryokan) that is one of the stops during the 4 day trip, meals are a time during which the satisfied passengers meet and talk while the train staff take good care of them. Every aspect of the journey is kept under control and the almost perfect level of service offered has no equal, anywhere in the world. This focus on comfort is one of the greatest assets for this new railway project and JR Kyushu has high hopes that it will seduce a new kind of tourist and bring them flocking in significant numbers. The concept seems to be a success as the train is already fully booked until June 2014. “We received nine requests for each cabin. We were forced to draw lots to allocate them,” says one of the company’s managers. Nanatsuboshi in Kyushu is also contributing to the popularity of this barely known island. Nanatsuboshi stands for high quality service, but the seven stars also designate the seven prefectures that make up Kyushu: Kagoshima, Kumamoto, Miyazaki, Saga, Oita, Nagasaki and Fukuoka. The train travels through all of them and gives passengers the opportunity to enjoy the riches of the landscape throughout their voyage. The view of the Ariake Sea between Hizen Hama and Hizen Oura is breathtaking and the section when the train is travelling towards Miyazaki early in the morning and guests can look out over the Hyuga sea is particularly enchanting. Like all good sea cruises, the train also makes stops to allow the travellers to discover various cities or sites along the way. Those who choose the weekend option can spend an afternoon in some of the most beautiful places in Nagasaki. Walking through Glover Park, which overlooks the port city, is a wonderful experience and takes you past a few beautiful colonial houses that are reminders of the part the city played in the modernization of the country. Close by is Oura Church (Oura tenshudo) that was built in 1864 under the supervision of Father Petitjean, the city’s first bishop. The pride of Nagasaki, it could easily be designated a Unesco world heritage site. Early risers are given the opportunity to walk up Mount Aso, an active volcano whose main characteristic is a 120 km circumference caldera, the largest in the world. In Yufuin, a charming spa town, travellers are encouraged to take a walk and experience the many hot footbaths (ashiyu) scattered across the town. JR Kyushu has a bus waiting at every stop, furnished to capture the same atmosphere as the train itself and ready to take the travellers to places of special interest. With the three-night option, one night is spent away from the train. Thirty kilometres away from Kagoshima, JR Kyushu has gone into a partnership with some exceptional hostels to offer its spoilt travellers unforgettable memories. One of them, the Ishiharaso, is situated by a river and offers an outside bath (rotenburo) hidden away in this natural setting.
It is quite common to see a heron flying by and landing just a few metres away, an example of a magical moment among many. Let yourself be transported by the magic of the railway that will leave you with a plethora of enchanting memories. Such a journey will always feel too short, but you will soon be able to book these kind of trips elsewhere and other railway companies across the archipelago are convinced it is a recipe for success. More magic is yet to come.