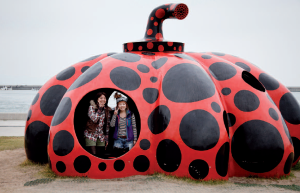 To look at a Japanese landscape is, ofetn, to think of art. To look over the middle Inland Sea is, for me, to think of the rock garden at the Ryoan-ji in Kyoto – a rectangle of white sand from which rises a number of large stones – and to realize what this amazing piece of landscaping is about”. Donald Richie, who died a few weeks ago, found the right words to describe this part of Japan in his book The Inland Sea (Stone Bridge Press), published in 1971. To him, this quiet landscape with its multitude of little islands inspired art, and his voice seems to have been heard, because some of these places have literally been transformed into works of art.

The most famous is Naoshima Island that covers 82 km and was drawn out of anonymity when the Benesse group, which specializes in education, decided to contribute to its rebirth by setting up a museum there. Since 1989 Naoshima has become a concept island where you can find the Lee Ufan museum, the Chichu museum designed by Ando Tadao and Benesse House, a hotel-museum also created by Ando, in which the work of great contemporary artists is on display. However, Naoshima isn’t just about museums, though to find so many concentrated in such a small area is in itself quite incredible. Many other curiosities can be found here, such as the Art Houses that display artists’ permanent installations, or the Shinto sanctuary designed by Sugimoto Hiroshi. You can visit all these places on foot from the Miyaura ferry terminal, designed by architectural firm SANAA, rent a bike or take the shuttle that runs around the Island. On arrival at Miyaura harbour, a giant red pumpkin with black spots characteristic of Kusama Yayoi’s work welcomes visitors. The artist “left” another one by Benesse House at the end of the pontoon, encouraging you to extend your gaze out towards the open sea.

What is particularly notable on Naoshima is the desire to incorporate the artwork, as well as the buildings, into the landscape so that they all become one. The Chinchu museum designed by Ando Tadao illustrates this beautifully. This “museum in the heart of the earth” is a wonderful find in which the art exhibited benefits from the setting. All these artistic achievements distinguish Naoshima from the other islands and concentrate tourists’ attention but these others mustn’t be forgotten for they also have much of artistic interest. Even more so with 2013 marking the second Setouchi Triennial, an international art festival by the Inland Sea.

The phenomenal success of the first, in which over 940,000 people participated, encouraged the organizers to repeat the experience. Twelve islands (out of the 727 in the Inland Sea) and two harbours (Uno and Takamatsu) are involved. Of course, Naoshima is at the heart of the event, but Inujima, Teshima, Megijima, Ogijima, Shodoshima, Oshima, Shamihima, Ibikujima, Honjima, Takamijima and Awashima are also involved.
Each of these islands offers animations, as well as permanent and temporary exhibitions during the period of the Triennial that ends on the 4th of November. The organizers have decided to divide the festival into three and specific events will be organized for each one. The first season ended on the 21st of April, the second will run between the 1st of July and the the 1st of September, and the last will take place between the 5th of October and the 4th of November. The idea is not only to use the islands as exhibition areas, but also to promote them by highlighting their own history. This is one of the great advantages of this ambitious project.

On Shodoshima for example, traditional celebrations will be the common theme and most of the projects will take place among rural communities. Oshima will be focusing on the future and Inujima, a former centre of copper production, will give pride of place to sustainable development with artwork exhibited throughout the Triennial. All the islands except for Shamijima, which is linked to Shikoku by bridge, are only accessible by boat from Honshu or Shikoku. In other words, you need to be organized. It’s not complicated to get to Naoshima because there are 15 daily ferry services between the island and Uno Port and 5 crossings from Takamatsu. On the other hand, there are only 3 between Oshima and Takamatsu. As for accommodation, Naoshima has a wide range on offer. The most expensive, and also the most original, is Benesse House. With rooms available from 35,000 yen you can even stay in one of the wings of the museum, which is accessible to hotel guests in the evening. Many of the rooms have a sea view and are very comfortable, allowing you to relax in a unique setting while planning the rest of your visit to the islands. Taking into consideration how expensive it is, Benesse House is an inaccessible dream for many. Nevertheless, there are very affordable Bed and Breakfasts (minshuku) on Naoshima as well as the other islands and they have the advantage of letting the visitor soak up the local atmosphere. The most reasonably priced and practical accommodation plan is to stay in Takamatsu or Uno, the two harbours that are taking part in this year’s festival, and to coordinate you journeys to the various smaller islands from there.

If you plan to visit two islands per day, except Naoshima and Shodoshima which both deserve at least a day’s visit each, you can consider spending about a week in this part of Japan before going on to explore the rest of the archipelago. It’s worth spending time in Takamatsu on Shikoku even when the Setouchi Triennial is not on. Its Ritsurin Park, created in 1625 by Ikoma Takatoshi, is especially beautiful. Among other sites worth seeing is the Kikugetsu-tei (Moon Pavilion) that was built in 1640. During the festival the harbour will welcome many projects by artists such as Araki Nobuyoshi. A tribute will also be paid to architect Tange Kenzo, as a reminder that one of the region’s characteristics is its mixing of art and architecture. The port of Uno, situated on the Honshu side and where the train line from Okayama terminates, also has a part to play. Besides a train decorated by Araki Nobuyoshi running several times a day, the port town is hosting work by David Sylvian.
This British musician, who is also an excellent photographer, has an exhibition called Abandon/Hope, which focuses on the idea of the importance of hope in our lives. “To live without hope is to live in the present,” he says. In Uno, you’ll also find Chinu, a monumental sculpture of a bream made by Yodogawa – Technique, a duo of Japanese artists who specialize in recycling waste for art. It is a show that’s not to be missed.