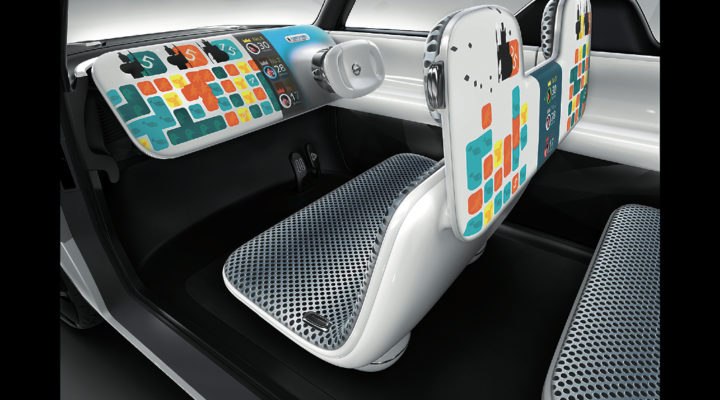 Nissan’s Teatro for Dayz presented at the Tokyo Motor Show in 2015. The prototype of a user-friendly, connected car.

Once everyone dreamed about cars, then they lost some of their appeal. Now they’re back in style.

In the first manga magazines in the 1950s and 60s, it wasn’t unusual to find several pages dedicated to the world of tomorrow. The year 2000 seemed to be so far away that people imagined an extraordinary and technologically advanced world. The vision presented was a positive one, and vehicles were expected to be wonderful machines — fast, safe, and able to avoid all kinds of obstacles. Japan was on the cusp of discovering the high-speed train, which didn’t appear in France until some twenty years later. Despite this, the Japanese were starting to get used to cars as personal property, as demonstrated by “MyCar”, a very popular phrase at that time, and were happy to look to the future. For them, it was a given that they would discover a whole new world and live in much better conditions.

The speed of technological innovation increased at the beginning of the following decade, while the time spent at work and on new leisure activities meant people were less inclined to spend time imagining the future. Why bother to use your imagination when new technologies kept rapidly appearing? Japanese society was very wealthy in the 1980s, and spoilt for choice at every level, cars included. Car manufacturers kept producing new models, and drivers had no time to get to know their new purchase before another, and more enticing model would appear on the market. Consumer society was at its height, and the emphasis was on the expectation of always owning something better. It was no longer about anticipating the future; it was all about accumulating in the present.

The bursting of the financial bubble at the beginning of the next decade, and the profound crisis that followed, changed the playing field once again — it was a time to be pragmatic and frugal. Dreaming of the future was discouraged, especially in a country where people tend to have rather a negative outlook during times of hardship. As for cars, smaller cylinder models such as the famous keijidosha (see Zoom Japan no. 25 October 2014), which made up half of Japan’s car fleet back then, were preferred. Nevertheless, the trend could not continue, as Japan is now facing new challenges that need to be resolved to keep the country on the road. The ageing population, pollution, and the depletion of fossil fuels are all issues that must be addressed. Manufacturers have all joined the innovation race in order to offer more suitable cars to their customers, who are more knowledgable about these problems nowadays. Unfortunately, technological innovations that reduce energy consumption and CO2 emissions do not fire our imagination.

We have had to wait for the arrival of what is called the “new economy” to be able to imagine the future with anticipation once again. In just a few years, new entrepreneurs not afraid of upsetting the established order have introduced a breath of fresh air. It’s allowed to pursue a dream in different areas of the economy — including car manufacturing. All that’s required is for people to take charge and use their imagination. Now that the self-driving car is at our fingertips, all that’s left for us to do is to invent the world of tomorrow that comes with it, which will be radically different from the one we know today.