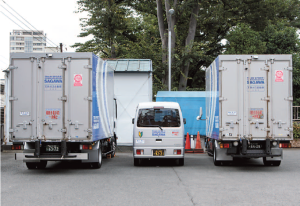 Keijidosha are all the rage, now making up 30% of all car sales throughout the nation.

In most countries, car licence plates give useful information about certain aspects of that particular country. In the United States they are often decorated according to the State the drivers come from. For a long time in France the last numbers indicated the region of origin and to keep children occupied on car journeys, their parents would often ask them to identify the prefecture or even sub-prefecture of other vehicles. In Japan, if you can read kanji you can often guess which city or suburb (especially in larger cities) a car’s owners live in, but even if you cannot, you can still tell about the type of car and its status depending on the colour of the licence plate itself. A white plate indicates that the car is an ordinary model and privately owned, while a green plate indicates that it is a company car, but if it is yellow or green with yellow lettering then it is a keijidosha, otherwise known as K-cars or lightweight cars. These must have a cylinder not exceeding 660cc and be no more than 3.40m in length, as stated in the 1998 regulations. If you pay a little attention, you will notice that these yellow licence plates are now everywhere across the country, no matter where you go. Even in big cities, where they are still in the minority, it’s obvious that they have increased considerably in number over the past few years, and as soon as you are out of the cities, these little cars are more numerous than any other vehicles. Ironically enough, in the country where the Toyota empire rules (a company that doesn’t produce any keijidosha), most Japanese people do not wish to use their cars to flaunt their wealth. These light weight cars are not a short-lived fashion trend.

They did not suddenly appear yesterday, and regulations for them were actually first put in place in 1949, at a time when the country was throwing itself into reconstruction after the Second World War. At that time most Japanese hadn’t the means to buy a car, and small businesses that needed transportation to help boost the ailing economy couldn’t afford the cost of a truck. Within this context, the market for keijidosha flourished, along with a growing need light utility vehicles. It took until the mid-50s for individuals to take advantage of the economic growth and start buying cars, and it wasn’t until 1964, 50 years ago, that the “my car” phenomenon of personal vehicle ownership began to spread. That year, the total number of cars on the road in Tokyo hit the million mark. The subsequent expansion of motorways in the capital and across the country that took place due to massive government investment in infrastructure, encouraged those with more money to acquire cars worthy of the name, and keijidosha were often forgotten or considered too old fashioned. When Japan became the second biggest economy in the world, it needed to maintain its image, and the easy money to be made from the financial bubble persuaded Japanese people to treat themselves to sedan cars, whose qualities were continuously extolled by their manufacturers on television. However, the economic crunch in the 90s, in addition to an ageing population, has upset the market once again. In rural areas where the percentage of senior citizens is rising rapidly, families who work in agriculture continue to equip themselves with small cylinder cars for work and private use. The need for more frequent visits to the doctor is a good enough reason for many people to choose this type of car, which also offer a good deal from the point of view of road and vehicle tax.

All the necessary conditions are in place to ensure these small cars sell like hot cakes, and today there are many more keijidosha than ordinary cars around the countryside. At this juncture however, it must be pointed out that these small cars have nothing in common with the kinds of small vehicles seen on the country roads of Europe that don’t require a licence to drive and succeed in being both noisy and polluting. Over time, Japan’s small cylinder cars have become more sophisticated, just as comfortable to drive as any other car, and with the help of a number of new technological innovations, they now appeal to a new and demanding customer base. Leading this trend are women, who do not consider engine power to be the main attraction in a car, especially as traffic in cities and the very strict speed restrictions do not allow one the opportunity to take advantage of it. Women tend to pay more attention to a car’s green credentials, how well it handles in the country’s narrow streets and a wealth of other characteristics that relate to the the driving experience. Most manufacturers have figured this out and are now counting on this new clientele to increase their share in the market. Because they don’t take up much space, households can have two cars, an ordinary sedan and a small cylinder car, as long as they can arrange the necessary parking (which is obligatory for any car you buy in Japan). Brands such as Suzuki, Hyundai or Daihatsu, to mention just a few who control most of the small cylinder car market, are also very aware of the issues presented by the increasingly ageing population, especially in large cities. According to the latest statistics, those over the age of 65 now represent 23.9% of the population. They are a generation who grew up with the car, but are not as tempted by large cars as some might imagine. They are increasingly turning away from large cars that are difficult to manoeuvre, preferring to drive the comfortable and easy to handle keijidosha, and manufacturers are already making cars that take into account their special needs. They are also working on producing intelligent cars that warn the driver about obstacles ahead, or that apply the breaks automatically if there is a problem. In fact, a rising proportion of road accidents involve older drivers, and rather than banning them from the road, manufacturers are working on models that can keep them driving – and buying – cars for longer. They are also concerned about young drivers who have less money than their parents did at the same age and are even introducing sporty looking keijidosha, although these have little else in common with real high-performance sports cars. Small cylinder cars now represent 30% of all car sales in Japan and could well have an even greater influence on the sales of regular cars in the future. They may look small, but they’ve proved to be very sturdy.