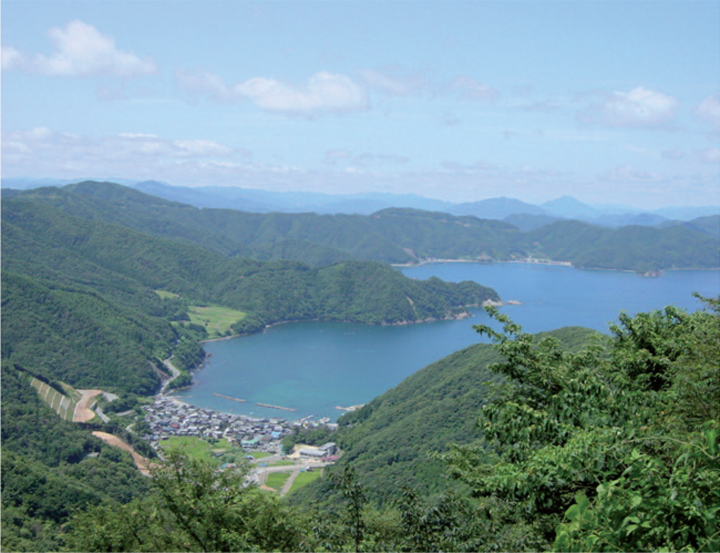 At the heart of Wakasa Province, Obama embodies ancestral Japan by preserving its culture and traditions.

Iregret not having the time to visit the city with which I share my name,” declared Barack Obama, the previous American president when he visited Hiroshima last summer. It was the first time that the whole world heard about the modest city located in Fukui Prefecture. Obama is one of those authentic Japanese towns, totally true to itself, and surrounded by striking countryside, which nourishes and feeds the daily lives of its 30,000 inhabitants. It’s also a place teeming with history where one can learn a great deal about life in Tokyo (Edo) before it became the capital of Japan. It’s in this city situated to the north of Kyoto that a part of Japan’s history was effectively written. Obama was then nicknamed “Nara on Sea” because it represented all the wealth and assets of the old capital, with its coast facing towards the Sea of Japan. Well protected and squeezed in between mountains and beaches, Obama only really became a city in 1951, despite the area having been inhabited for centuries. Previously, Obama was an outstanding natural harbour, which allowed the development of trade with China and Korea. It was a gateway to Japan and the eastern end of the Silk Road. 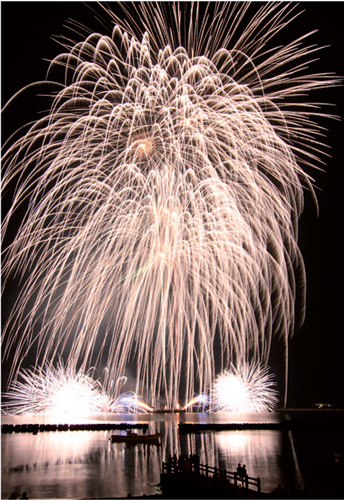 Every year in August in Obama, the sky lights up.

At that time, this strategic centre for trade and commerce was also the closest harbour geographically to the old capitals of Nara and Kyoto. The bay that it borders allowed it to supply the wealthy cities with an abundance of the finest seafood. Obama was the point of departure for what is known in Japan as the Saba kaido (Mackerel Road), a 75 kilometre long route linking it to the Imperial capital. This route was granted national heritage status in April 2015. Its history is unique. During the Heian Era (794-1185), Wakasa mackerel was salted and then transported round the clock to the big cities, carried in relays on the backs of men and horses. The route was often hard going, so it was difficult to deliver the fish by dawn when it was destined to be sold on the stalls in Kyoto market whatever the season, despite the region’s sometimes harsh winter climate.

Their journey took them from the west coast of Biwa Lake, through the villages of Kutsuki, Ohara and Yase before at last reaching Kyoto. For the more adventurous among you, this route is still accessible: it’s signposted along its whole length with information and stories about that period. This historic route has doubtless contributed to spreading Wakasa Region’s gastronomic reputation nation-wide. Its dishes received the ultimate accolade by being served at the Imperial table in the capital of Miketsukuni.

Even today, the Japanese go on gastronomic trips to Obama to taste its local specialties. Raw or grilled mackerel, fugu, as well as other seafood such as oysters, sea cucumbers (namako), karei (local cured and dried fish) are all particularly famous. The city is also known for the quality of its rice, its pickled plums (umeboshi), and its game (deer and wild boar). Obama’s mackerel is still a sought-after delicacy served during the Gion celebrations in Kyoto, and a more modest matsuri is held in Obama every year around mid-September, in memory of the prosperous Saba kaido period. Wakasa karei is still served to the Imperial Family every year. Second only to Kyushu Island, Obama is without doubt the best place in Japan to savour fugu. No part of this precious fish goes to waste as all of it can be eaten, and each part can be prepared in different ways: as sashimi, stewed, grilled, in a salad, etc. Mr Kawahara’s inn serves a delicious meal made entirely from fugu. Don’t hesitate to order a glass of hirezake, a hot sake containing a fugu’s fin. It’s delightful and slightly smoky taste will encourage you to order a second glass. 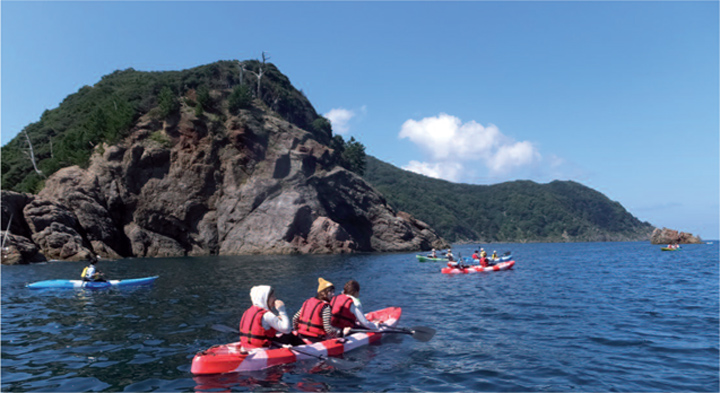 Lovers of sports activities can discover the area by kayak.

For more information on the gastronomy of Wakasa, a museum in the city’s Shokubunkakan (Mermaid Plaza) is dedicated to the region’s food. The history of Obama is as fascinating as its landscape. When the weather clears up and the boats are out sailing, you can reach the magnificent steep cliffs of Sotomo, accessible from April to December. Many traditional inns also offer fishing boat tours to discover the many species of fish that live in Obama’s waters. At the Blue Park, you can also learn how to prepare what you have caught. Locals help visitors to fillet the fish and prepare sashimi, which you can then sit down to enjoy in good company. Despite its modest size, Obama has a rich cultural heritage. There are no fewer than 130 temples in the city and its surroundings, and most of them are incredibly well-preserved gems that date back to the Heian and Kamakura eras. Myotsuji temple, registered as a national treasure, dominates the city from its hilly location. Dating back to the Kamakura era, it has a rare and rugged beauty. The adjoining pagoda was built in 806. Here and there the wooden framework is covered with moss, witness to the passing of time, and typical of the Japanese aesthetic of wabi-sabi, meaning related to the contemplation of time and its torments. Obama’s Buddha statues are also beautiful. It’s rare to come across such old yet well-preserved Buddha in Japan. Obama is also remarkable for the quality of its local craftsmanship. 80% of Japan’s lacquered chopsticks, the Wakasa nuri-bashi, are made here. Japan’s lacquer capital is Wajima, to the north of Kanazawa, but Wakasa’s 400-year-old connection to lacquer is no less remarkable.

The technique consists of polishing the lacquer with a piece of stone or coal, in order to bring out the shell and eggshell motifs. Gold leaf is sometimes used, transforming the chopsticks into work worthy of a goldsmith. “It takes eight months to a year to make certain objects out of lacquer,” says master Aoto Hideo. “The object is always made from bare wood. The lacquer is applied as a liquid, and all kinds of things are used to create the motifs: gold, eggshells, pine needles, etc. In total, a 24-step process is required.” Tourists can make their own lacquered chopsticks in workshops with advice and help from an experienced master. It’s a unique experience that reveals the difficulty of the craft. The city is a charming haven of peace in summer, many Japanese enjoy swimming and barbecues in its numerous peaceful little inlets. The Sea of Japan is fed with warm sea currents that aren’t as strong as in the ocean waters surrounding other parts of Japan, contributing to the calm bathing conditions. There are also fewer holidaymakers on this wild coastline, which is an advantage. However, after mid-August, be aware that the warm waters also attract numerous jellyfish. 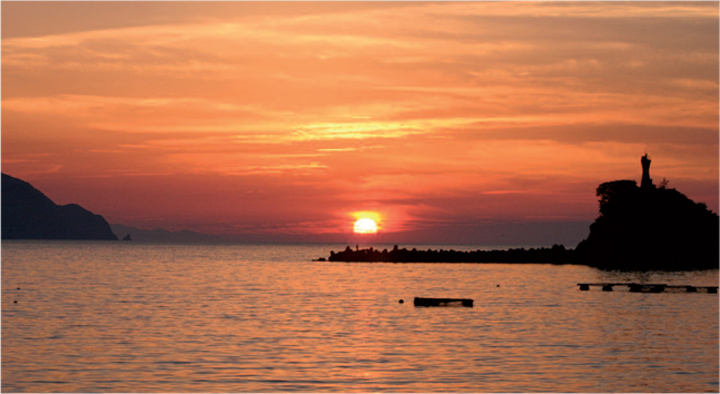 Don’t forget to stay for the sunset on the Sea of Japan.

The city boasts many family-run bed and breakfasts (minshuku) for overnight stays, such as the Murakami Tosen, a charming traditional Japanese inn run by a couple and their children. Futon, tatami and shared bathrooms allow you to slip easily into the gentle embrace of Japanese hospitality. The delicious breakfasts include miso soup, grilled fish, and rice. If you wish to spend a little longer with the Obama locals, all you need to do is have lunch at Kitchen Boo. For less than £9, you have access to a buffet including a profusion of Japanese dishes made from seasonal vegetables and fish. You will find families, children, and older people all gathered around the tables. We went on a Sunday and everyone declared themselves delighted to share this meal in such good company. At the moment, it’s not that easy to travel to Obama, but a high-speed train connection is planned for 2022, like its neighbouring city Kanazawa, which has benefitted from a Shinkansen connection since 2015. This will allow the little city, which is still 2 hours away from Kyoto, and nearly 5 from Tokyo, to really fly.
HOW TO GET THERE:
FROM KYOTO, catch a Limited Express Thunderbird on the Hokuriku line. It takes two hours to reach the little coastal city, with a change at Tsuruga where you catch the Obama line.
FROM TOKYO, catch the Tokaido Shinkansen to Maibara where you need to change for the Limited Express Shirasagi to Tsuruga. Then change for the Obama line. The journey takes around 5 hours in total.