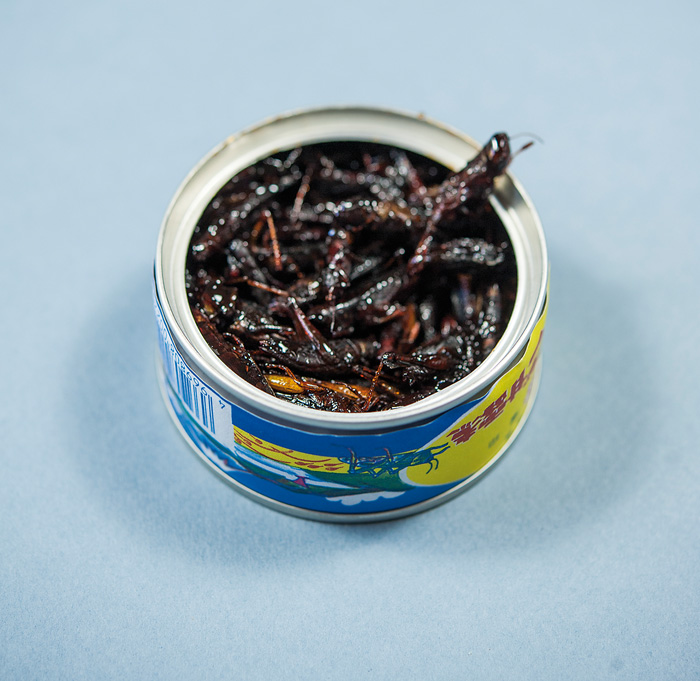 What would you say to eating grilled and seasoned grasshoppers?

Surrounded by the sea which supplies all that’s needed to make fish sushi and sashimi, few people know that in some mountainous regions of Japan insects provided a valuable source of protein for those who lived far from the sea.

During the Edo period, in the 18th and 19th centuries, many documents record the fact that they were eaten regularly. For instance, it’s stated that “peasants eat grilled grasshoppers”, which are “as tender as small prawns”. Grasshoppers on skewers were “a seasonal dish, often bought by children”. Wasp larvae are also mentioned: “Remove the larvae from the nest, season with soy sauce, then when the rice is cooked, stir them into the rice: it’s a dish that always pleases special guests. The flavour of the fat grilled larvae is delicious.” As late as 1919, a report on the consumption of insects lists 55 kinds of insects for culinary use and 123 for medicinal purposes. Vespinae (a sub-group of wasp), zazamushi (the larvae of caddisflies, stoneflies and other closely related freshwater insects), grasshoppers, cicadas and silkworms were the most popular and are still eaten today.

Insects living on certain trees or fruits are enjoyed for their flavour, such as the sweet-chestnut weevil and the oak worm, and includes those that eat the leaves of cherry trees. And, of course, there are grasshoppers, Japan’s most popular edible insect, which feasts on rice until it is harvested. They’re considered a healthy insect to eat because of their diet, and eating them means you kill two birds with one stone by preventing them from damaging the rice in the paddy fields.

Insects were also used in traditional Japanese medicine, and documents from the 17th and 18th centuries report the use of cockroaches as well as snails, grilled cynops pyrrhogaster (a kind of salamander), boiled trichoptera…

Insects, whether edible or not, have always cohabited with us. Even cockroaches once enjoyed a positive image in Japan, as their presence in the home was proof of a certain amount of abundance, demonstrating that at least there was enough to eat and the house was kept warm. It’s only during the course of the country’s modernisation that some insects have come to be regarded as “harmful”, and have been banned to allow the emergence of clean cities and make agriculture more efficient. With the massive use of insecticides, there’s been a sharp decline in the number of insects and their consumption. The birth of a “clean” Japan has marked a decline in the culture of eating insects… But, having said that, figures from 2008 attest to the fact that a ton of canned wasp larvae was sold, as well as grasshoppers and several hundred kilos of other insects. You’ll have no difficulty in tracking down some in Nagano Prefecture, for example, just a two hour train ride from Tokyo…

No60 [HISTORY] Freedom to choose what to eat

No52 [SAKE] My Cup Runneth Over

No32 [Cooking] Soba Salad with Asparagus and Grated Breakfast Radish