hello there! This column will include useful Japanese phrases that cover a variety of topics. 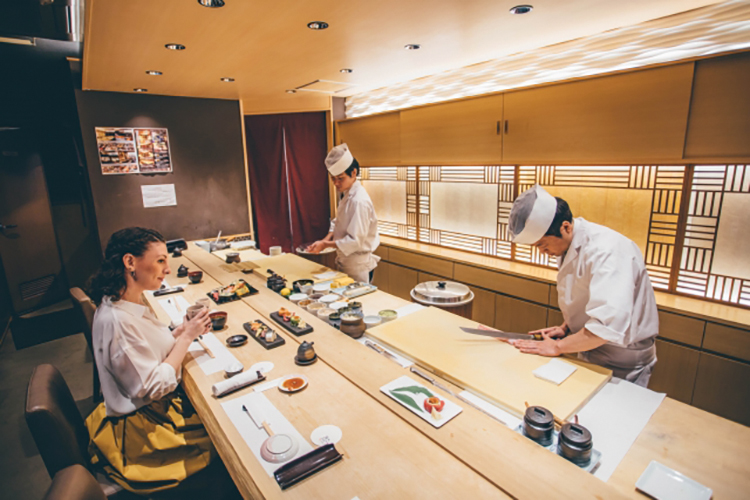 Konnichiwa, Mina-san! (Hello, everyone!) Last time I taught you how to talk about yourself in Japanese so that you can answer the questions “Where are you from?” and “What Japanese food do you like?” Do you remember how to say “I’m from the UK!” or “I love Sushi” in Japanese? What would you expect to be asked next after answering these questions? I asked a few friends who are British and very fluent in Japanese what people would normally ask them next in this situation. Their answer is “Can you speak Japanese?!” (in an impressed voice).

So let’s look at the conversation below. It’s the same setting as last month. You are sitting at the bar in the sushi restaurant and having a conversation with a sushi chef.
(S=Sushi Chef, C=Customer)

Now, there are three parts of this conversation that I would like to examine in more detail. Firstly “nihongo”. I bet some readers already know this word. “Nihongo” means “Japanese”. So how about the final part of this word “go”? Actually “go” means “language” (be careful not to confuse it with the English verb!). So putting “go” after a country name turns it into the language of that country. For instance, Spanish is スペイン語 (supeingo) which is Spain (supein) + go (language); Italian is イタリア語(itariago) which is Italy (itaria) +go; and French is フランス語 (furansugo) which is France (furansu) + go. So how about English? This is a little bit special (as usual, grammar loves exceptions). English is “eigo”. Why is it not igirisugo? (As explained in an earlier column, the UK is commonly referred to as igirisu in Japanese). I would like to tell you a little bit about Japanese history. In the 7th century, Japan started sending specialists to China in order to learn about their technology, systems of governance and to engage in cultural exchange. During this period, Japan imported Chinese characters called 漢字 (kanji) and also received information about other countries all over the world through China. As you might guess, these country names were written in kanji, and the part of the world now known as the UK was written in kanji as 英国(eikoku). This way of writing country names in Japan in kanji lasted until 200 years ago when カタカナ(katakana) became more popular for writing foreign words. However still some countries can be written in both kanji and katakana and the UK is one of them. So you might hear Japanese refer to the UK as イギリス(igirisu) or 英国(eikoku).

The second point I want to explain is “dekimasu”. “Dekimasu” means “can” or “be able to”, so by using the expression “dekimasu” you can talk about the things that you can do! “Nihongo dekimasu” was used in the conversation above, so can you work out how to ask “Can you speak English?” in Japanese? The answer is… “Eigo dekimasu ka?” Btw, adding “ka” to the end of a sentence turns it into a question. Other examples using “dekimasu ka?” are: “sakkaa dekimasu ka?” (“Can you play football?” We use the term soccer in Japan, not football. Sorry UK football fans!) and “gitaa dekimasu ka?” (“Can you play guitar?”)

Finally, I will explain the expression “sukoshi dekimasu” which translated literally means “a little can/be able to”. As I introduced last month, the Japanese language often omits the subject from a sentence. This time isn’t an exception; not only the subject but also the object has been omitted. If I write this as a full sentence, it would be “(I) can (speak Japanese) a little”. 3 out of 6 words have vanished! It’s very interesting, isn’t it?